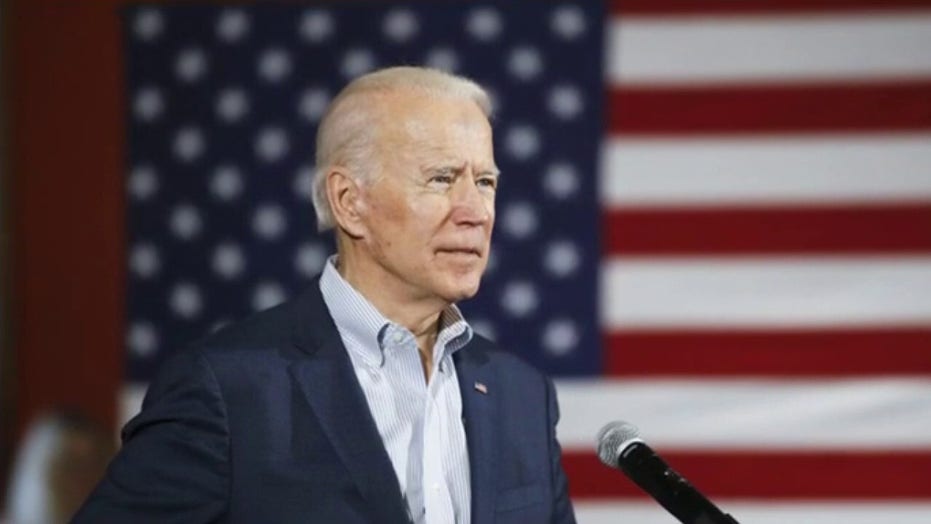 Biden slammed for coughing in his hand

Joe Biden on Monday launched a new podcast titled “Here’s the Deal” in his latest effort to break through the coronavirus coverage as the crisis overshadows his campaign at a crucial political time.

The former vice president – who’s been working out of his home since the coronavirus pandemic has forced more than half of all Americans to huddle in their homes to prevent the spread of the virus – told his supporters: “I'm sitting here in Wilmington, Delaware, and it's a scary time. A lot of people out there are confused. Things are changing every day, every hour. So I wanted to have this conversation with you.”

The all-but-certain Democratic presidential nominee explained that one of the missions of the new podcasts is “so we can keep talking with each other. We can't hold rallies anymore. We're not gathering in large public spaces. We're living in the new normal. But I want you to know that I'm with you. I'm on your side. We're gonna get through this together as a country.”

And Biden added that "the second reason is I think this podcast could offer some really helpful information."

The 77-year-old Biden is well known for sharing emotional moments with supporters at campaign events, but, until further notice, his human contact has been almost completely eliminated as the campaign has moved to the world of virtual town halls, roundtables, news conferences and now podcasts.

THE LATEST FROM FOX NEWS ON THE 2020 PRESIDENTIAL CAMPAIGN TRAIL

“When I have anyone in the house … whether it’s the Secret Service has to come in, or staff to set up the mechanisms to do this, they’re all wearing gloves and masks and so that we are all staying 6 feet apart,” Biden told his supporters.

While President Trump’s been the center of attention – both positive and negative – as he holds daily White House briefings on the coronavirus crisis that are carried live on all the major news networks, Biden’s struggled to increase his media profile that was instantly erased two weeks ago as the coronavirus outbreak wiped the White House race from the headlines and froze the Democratic nomination battle in place. This, just as Biden was looking well-positioned to secure the nomination itself. Without any formal current post in government, Biden has no direct role in combating the crisis and has been overshadowed both by Trump’s daily briefings as well as New York Gov. Andrew Cuomo’s media rise the past two weeks.

The former vice president’s first podcast guest was his former chief of staff, Ron Klain, who also steered the Obama administration’s efforts in battling the Ebola crisis. The two used part of the 21-minute podcast, which was recorded last week, to critique how Trump should be handling the federal government’s response to the pandemic.

Biden stressed that, “I'm determined that this should not be political. This is not about partisan politics. It's about how rapidly we can put in motion the initiatives that are going to save people's lives and get us through this process.”

But Biden seemingly took a jab at Trump by urging him not to “resort to fear mongering and also baseless downplaying or lying about the situation. The president needs to be honest, needs to follow the science, needs to be transparent with the American people. And we need information for people, not to scare them, but to get people to pull together, because that's how we're going to beat this.”

Speaking with "Fox & Friends" earlier Monday, Trump took a swipe at Biden by suggesting Cuomo would make for a better Democratic presidential nominee.

“If Sleepy Joe was president, he wouldn’t even know what’s going on,” Trump said.