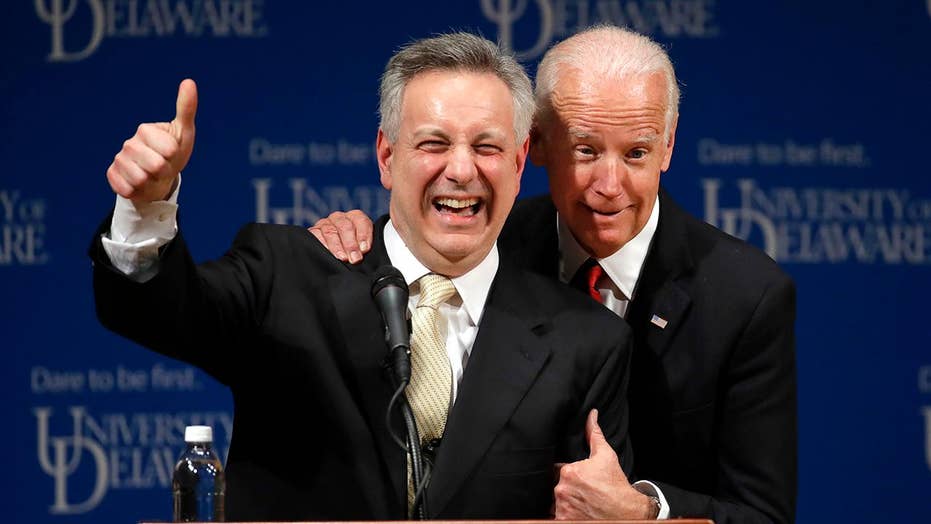 In his first public appearance since allegations of improper contact with women threatened his yet-to-be-announced White House bid, former Vice President Joe Biden appeared to make light of the controversy surrounding his well-publicized past getting too close for comfort with fellow politicians, their family members and others.

BIDEN TEAM CHARGES AHEAD WITH PLANS FOR 2020 CAMPAIGN

And referring to his likely presidential campaign announcement, Biden said, "I am very close to making a decision to stand before you all relatively soon." Asked why the hold-up, Biden quickly answered, "The hold-up is to put everything together."

The comments Friday reflected a likely candidate still wrestling with how to address the controversy. But at the start of the event – a speech before a friendly audience, the International Brotherhood of Electrical Workers – he defaulted to a familiar approach, with a seemingly off-the-cuff quip that played well in the room, but not necessarily to the rest of the country.

Biden was introduced by the union's male president, Lonnie Stephenson, and embraced him. The former vice president immediately joked that: “I just want you to know I had permission to hug Lonnie.”

The comment elicited cheers from the mostly male audience of largely blue-collar workers that Biden feels he can count on as he moves closer to launching a third White House bid.

But Lucy Flores, the first woman to come forward with allegations of improper touching, tweeted, "It’s clear @JoeBiden hasn’t reflected at all on how his inappropriate and unsolicited touching made women feel uncomfortable. To make light of something as serious as consent degrades the conversation women everywhere are courageously trying to have."

Others joined Flores in suggesting Biden should not be joking about the issue.

About 15 minutes into his speech while talking about the need to license to braid hair in some states, Biden stopped himself and said “I should be careful,” which brought laughter from the union crowd.

But speaking with reporters after his speech, Biden took a more serious tone.

Biden, known as a hugger and back-slapper on the stump, lamented that, "I think [I'm] going to have to change somewhat how I campaign."

Biden’s comments to the union crowd, quickly described as tone deaf by some political commentators, seemed to step on comments addressing the controversy that he made Wednesday in a video released on Twitter.

Biden’s Friday appearance came one week after questions over his affectionate brand of physical politics was thrust into the spotlight thanks to allegations from 2014 Nevada Democratic lieutenant governor nominee Flores. She said in an essay published in New York Magazine that Biden made her feel "uneasy, gross, and confused" at a campaign rally when she said he kissed her on the back of the head. Her claims quickly went viral and became a top cable news story throughout last weekend and into this week.

In the ensuing days, six other women came forward to recount similar physical encounters with Biden that they say made them feel uneasy.

Those accounts were countered by dozens of testimonials from women – from former Biden staffers to lawmakers – who said they’ve always viewed the former vice president as supportive.

Biden allies say that the controversy’s not slowing down the likely launch of a presidential campaign.

An adviser close to the former vice president told Fox News the uproar, if anything, “has strengthened his resolve.”

President Trump on Thursday mocked Biden, tweeting out a doctored version of the video that the former vice president had released a day earlier. "WELCOME BACK JOE!" Trump wrote in his tweet.

Biden fired back on Twitter, writing, "I see that you are on the job and presidential, as always."

Asked about Trump’s slight, the former vice president told reporters Friday, “It doesn’t surprise me. He doesn’t have time to do his job. Look, everybody knows who Donald Trump is. I don’t have to say anymore, I don’t think.”

Trump, who’s been accused of sexual harassment and assault by around a dozen women, was questioned on Friday if he was the right person to scrutinize Biden because of his own history.

“I think I’m a very good messenger,” the president responded, adding that “people got a kick out of it (the doctored video). We’ve got to sort of smile a bit.”

Biden, pushing back against the perception that he's a moderate in a party that's increasingly moving to the left, also defended his record on Friday. He said he'll stack his record against "anybody who has run or who is running now or who will run."

And highlighting his early public push for same-sex marriage, he said, "I'm not sure when everybody else came out and said they're for gay marriage."