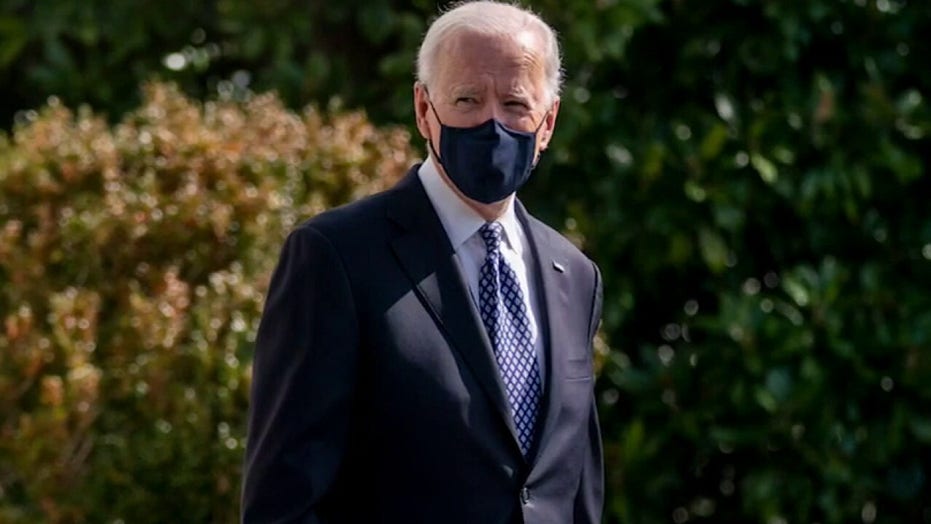 The President comments on border 'crisis,' quickly answers reporter questions outside the White House on Sunday.

President Biden said Sunday that he intends to travel to the southern border "at some point," telling reporters that he is in no rush to visit because "I know what's going in those facilities."

Biden’s immigration agenda includes a pathway to citizenship for 11 million undocumented immigrants, but the president last week urged migrants planning on embarking to the United States to hold off for the time being.

Asked Sunday why his warning did little to quell the chaos at the border, Biden admitted that his administration could increase efforts to transmit his recent messaging to migrants making their way to the U.S.

The Customs and Border Protection (CBP) facilities have been operating far beyond capacity amid a troubling surge in border crossers. The agency announced that it had encountered more than 100,000 migrants at the border in February, while numbers of child migrants in custody have also increased dramatically.

The Biden administration has been moving to increase capacity of facilities to house migrants, and building a number of extra facilities — including looking at NASA sites and military bases.

Republicans have laid blame on Biden for the surge after he rolled back a number of Trump-era immigration restrictions he deemed inhumane, including ending the "Remain-in-Mexico" policy and reinstating "catch-and-release."

Former President Donald Trump released a statement in response to Biden's remarks on Sunday, blaming his successor for turning "a national triumph into a national disaster" with his handling of the crisis.

Trump took aim at the "pathetic, clueless performance" of Department of Homeland Security Secretary Alejandro Mayorkas, writing that "Even someone of Mayorkas’ limited abilities should understand that if you provide Catch-and-Release to the world’s illegal aliens then the whole world will come."

"It’s clear they are engaged in a huge cover-up to hide just how bad things truly are," the statement continues. "The only way to end the Biden Border Crisis is for them to admit their total failure and adopt the profoundly effective, proven Trump policies."

Trump urged Biden to "immediately complete the wall, which can be done in a matter of weeks.

"They should never have stopped it," he said. "They are causing death and human tragedy."