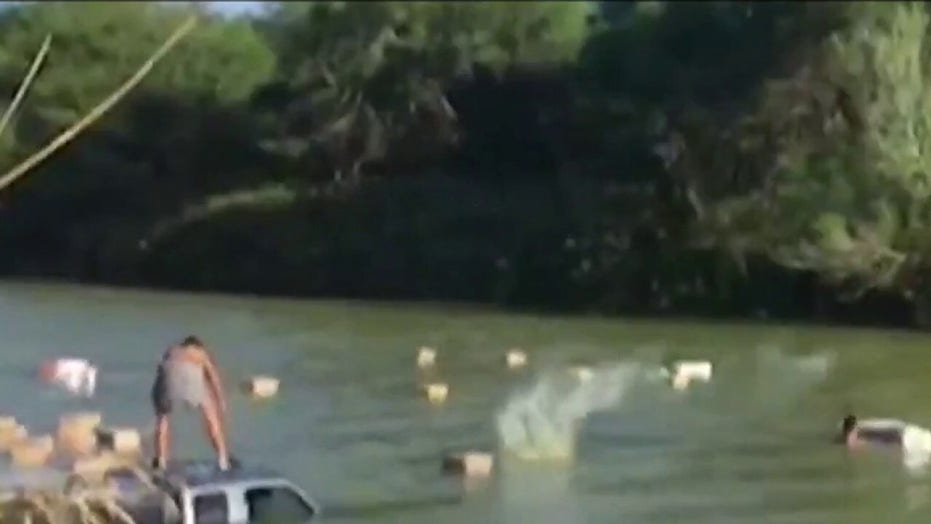 Fox News' Rich Edson reports from the Rio Grande Valley as lawmakers visit the southern border to see the migrant surge up close.

As President Biden nears his 100th day in office, his overall approval ratings remain well above water and he scores high marks with Americans on how he’s handling the coronavirus pandemic.

But when it comes to the crisis at the U.S.-Mexican border, most Americans disapprove of the president’s performance, according to a new national poll.

Amid the massive influx of migrants crossing the southern border, only 29% of Americans questioned in a Quinnipiac University national survey said they approve of the job Biden’s doing, with 55% giving the president a thumbs-down, and 15% not offering an opinion.

Nearly nine in 10 Republicans and nearly two-thirds of independents disapprove of Biden’s border performance, with Democrats approving by a 58%-21% margin.

People surround a car as it arrives carrying food donations at a makeshift camp for migrants seeking asylum in the United States at the border crossing Friday, March 12, 2021, in Tijuana, Mexico. The Biden administration hopes to relieve the strain of thousands of unaccompanied children coming to the southern border by terminating a 2018 Trump-era order that discouraged potential family sponsors from coming forward to house the children. (AP Photo/Gregory Bull)

More than half of Hispanics (55%) surveyed said they disapprove, with 27% supportive of Biden’s handling of the border situation.

The influx of migrants crossing from Mexico has jumped since Biden's inauguration on Jan. 20. Republicans have repeatedly slammed the president on the issue, blaming him for what they constantly call a "crisis."

Biden is also facing incoming fire on the issue from the Democratic Party's progressive left, which is increasingly frustrated with the slow progress so far by the president to deliver what he promised on the 2020 campaign trail — a more humane immigration system than the restrictive policies under former President Trump's administration.

"The president is confronting the same political quagmire south of the border that bedeviled his predecessor. The border with Mexico, and the people trying to cross it, loom as a familiar crisis," Quinnipiac University polling analyst Tim Malloy highlighted.

Biden’s numbers on the border crisis stand in stark contrast to his 64%-29% approval on handling the COVID pandemic and his 50%-42% approval on dealing with the nation’s economy.

The Quinnipiac University poll was conducted April 8 - April 12, with 1,237 adult Americans questioned by live telephone operators. The survey’s overall sampling error is plus or minus 2.8 percentage points.