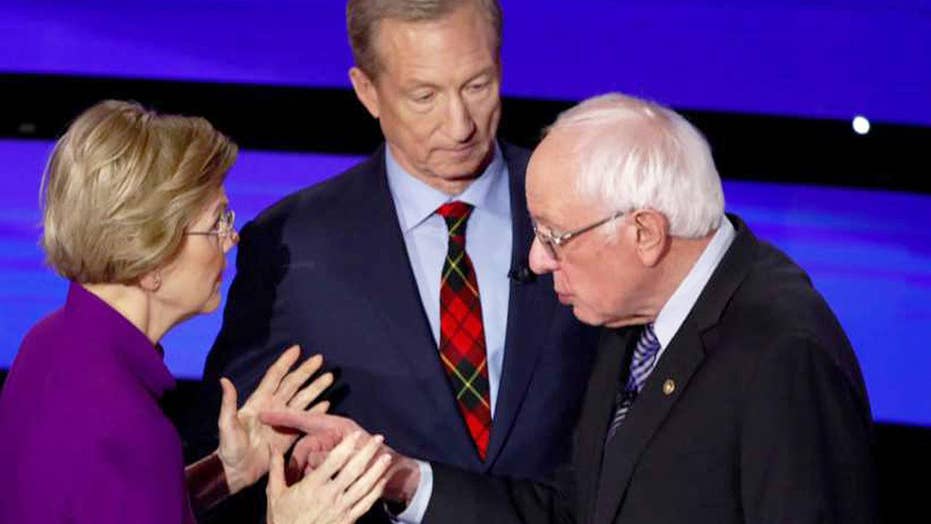 Zephyr Teachout, a Fordham Law professor, wrote the column for the Guardian that could be used as a roadmap for President Trump's re-election team in the general election. She described a candidate happy to be called "Middle-Class Joe," but whose political career is a bit murkier. She wrote he has a long history of supporting "finance over working-class Americans."

BIDEN SPEAKS OUT AGAINST RACISM,  LUMPS TRUMP IN WITH KKK

Teachout, who has officially endorsed Sanders, went on to write that nominating a candidate like Biden would make it more difficult to defeat Trump. She said it would allow Trump to "muddy the water, to once again pretend he is the one "draining the swamp."' She said Biden’s record illustrates the "grossly corrupt culture in Washington that long precedes Trump."

Perhaps if the op-ed stood alone it would result in little more than eye rolls from the Biden campaign, but an NBC News reporter pointed out on Twitter that the Sanders campaign circulated the column. Mediate pointed out that Briahna Joy Gray, Sanders' press secretary, refused to "directly endorse or disavow" the op-ed's accusations during an appearance on MSNBC.

There's a famous quote attributed to Jonathan Swift, an Anglo-Irish essayist, that goes "a lie can travel halfway around the world while the truth is still putting on its shoes." At this crucial stage in the primaries, even statements debunked outright can have lasting effects on a campaign.

Sanders was interviewed by CBS News Monday and distanced himself from the op-ed, saying, "It is absolutely not my view that Joe is corrupt in any way. And I'm sorry that that op-ed appeared."

Biden took to Twitter to thank Sanders for the acknowledgment and said it is important that the remaining candidates keep their focus on making Trump a one-term president.

Tensions among the remaining candidates appear to be at its all-time high. Last week, tensions boiled over on stage after the debate when Sanders was confronted by Sen. Elizabeth Warren, who accused him of lying about her in the media.

Sanders and Biden have also been feuding over the former vice president's tenure serving under President Obama. Sanders has claimed that Biden pushed to weaken Social Security.

Biden told an audience that "Bernie's people" had circulated a video that falsely suggested that in 2018 he agreed with then-House Speaker Paul Ryan’s push to dismantle Social Security benefits.

"It’s simply a lie, that video that’s going around," he said, adding that Politifact has debunked the video. "This is a doctored tape," said Biden.

An intraparty battle is seen by many political insiders as a gift for Trump, who is currently facing an impeachment trial in the Senate.

Leslie Marshall, a Fox News contributor, wrote in an op-ed that, "If my fellow Democrats fail to get behind whoever the Democrats nominate for president this year, they will ensure Trump’s reelection."