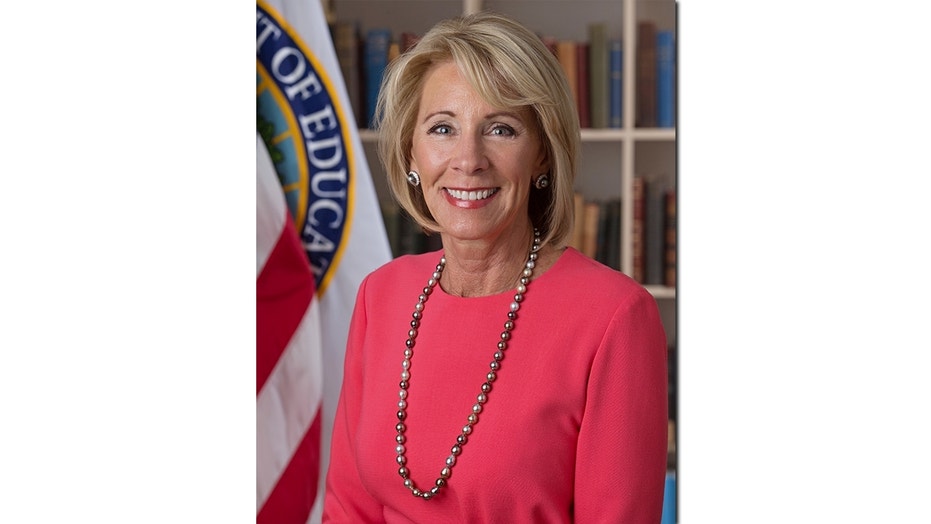 Education Secretary Betsy DeVos has been taking aim at education issues central to Democratic policy, here's a look at some of them.

Education Secretary Betsy Devos might just be the Trump administration cabinet member Democrats love to hate most. Senators Bernie Sanders and Elizabeth Warren regularly call her the "worst" education secretary. Democratic Rep. Federica Wilson recently called her “the most unpopular person in our government" during a House hearing. Few, if any, education secretaries have required U.S. Marshals Service security detail to fend off passionate opponents.

Yet, DeVos, a devout Christian and wealthy longtime Republican donor and education advocate, remains beloved among Trump supporters and has held steadfast in her position in a cabinet with unprecedented turnover rates. So, here are five DeVos moves that enraged the left:

U.S. Education Secretary Betsy DeVos testifies before the House Education Committee on "Examining the Policies and Priorities of the U.S. Department of Education" on Capitol Hill in Washington, U.S., May 22, 2018. REUTERS/Leah Millis - HP1EE5M17LA2E

1. The Department of Education restricted privileges in a bargaining agreement with its union after months of attempted negotiations failed to produce a deal.

The Education Department informed the union, which represents nearly 4,000 federal employees, they would no longer be bargaining with them and implemented a new agreement between itself and and its union, the American Federation of Government Employees, which seemed to restrict some of the union’s benefits. The new contract required AFGE to pay “fair market rent” when it typically had an office in a Education Department building. It also restricted the amount of paid leave union members could use to work on union-related activities.

Under the new agreement, union workers are no longer “locked in” and must renew their union membership each year. The old contract left union members with a 48-hour period each year to opt-out of paying union dues and fees.

“The union spent more than a year dragging its feet on ground rules [for] negotiations without reaching any agreement, and then failed to respond in [a] timely manner to negotiate over the contract proposed by the department,” DeVos spokeswoman Elizabeth Hill told the Washington Post. “This contract complies with all statutory requirements and maintains union members’ rights under the Civil Service Protections Act and the Federal Labor Relations Act.”

The union then filed a complaint with the Federal Labor Relations Authority  against the DeVos led department, accusing the agency of union busting. The AFGE said the agreement was never actually an “agreement.” “The agency has imposed an illegal document that we had absolutely no bargaining over. Secretary Betsy DeVos and her management team are attempting to strip employees of their collective bargaining rights and kill the union,” Claudette Young, AFGE Council 252 president, said in a statement.

2. DeVos was held in contempt of court after violating an order to cease collecting student loans.

In October 2019, a federal judge held DeVos in contempt of court and sanctioned the Education Department $100,000 after the department continued to garnish wages and seize tax returns of in total nearly 16,000 borrowers who were granted loan forgiveness by the courts under the borrower defense to repayment program.The court said the students were defrauded by now-defunct Corinthian Colleges after Corinthian, embroiled in scandal and bankruptcy, was forced to close in 2015.

The initiative sought to provide loan relief to students who were misled by the school, but DeVos tried to limit the scope of the program even after a judge’s ruling in 2018.

DeVos argued the borrower defense was too lenient. In a 2017 speech, she said, "While students should have protections from predatory practices, schools and taxpayers should also be treated fairly as well. Under the previous rules, all one had to do was raise his or her hands to be entitled to so-called free money," according to Detroit News.

Rep. Bobby Scott, D.-Va., threatened to subpoena department documents -- and even DeVos herself, to shed light on the department's thinking. "We've been asking for information since last year," Scott told NPR in 2019.  "We expect answers."

3. DeVos rolled back Title IX regulations she deemed unfair to the accused.

DeVos overhauled guidance to how schools handle complaints of sexual misconduct in November 2018, adding protections for those who had been accused of assault and harassment. The changes limited the definition of sexual harassment and allowed for cross-examination of the accuser by the accused’s defense team.

“Any perceived offense can become a full-blown Title IX investigation. But if everything is harassment, then nothing is,” Devos explained.

In 2017, DeVos rescinded a set of 2011 rules from the Obama administration that guided schools on how to handle complaints. Some said those rules tipped the scales in the favor of accusers, and some college leaders complained the rules were too complex and could be overly burdensome.

Democrats perceived the changes to be harmful to women. The Democratic National Committee accused the Trump administration of delivering “one devastating blow after another to women and victims of sexual misconduct.”

Ever since her confirmation hearing (and even before, in her personal philanthropic work), DeVos has been a vocal proponent of school choice. DeVos told the Senate Health, Education and Pensions Committee that she would be "a strong advocate for great public schools" if confirmed, but added, "If a school is troubled, or unsafe, or not a good fit for a child ... we should support a parent's right to enroll their child in a high-quality alternative."

DeVos repeatedly advocated for multibillion dollar investments into voucher programs as a part of budgets bills that didn’t make their way through Congress.

In early 2019, she renewed her fight for school choice by with a proposal to provide $5 billion a year in federal tax credits for donations made to groups offering scholarships for private schools, apprenticeships and other educational programs. DeVos sold the plan as a way to give students more choices without diverting money from public schools.

Democrats still were not pleased. "Secretary DeVos keeps pushing her anti-public school agenda despite a clear lack of support from parents, students, teachers, and even within her own party,"  Sen. Patty Murray, the top Democrat on the Senate education committee, "Congress has repeatedly rejected her privatization efforts, and she should expect nothing less here."

In early 2019, the Trump administration looked to decrease the Education Department’s funding by $7.1 billion over the previous year. DeVos said the budget shows a “commitment to spending taxpayer dollars wisely and efficiently by consolidating or eliminating duplicative and ineffective federal programs.”

The proposed budget also included an increase of  $60 million for the Charters Schools Program.

The budget suggested eliminating 29 programs, including after school care programs, and a particularly controversial cut to funding for the Special Olympics.

Trump eventually backed away from cutting Special Olympics funding. “I’ve overridden my people for funding the Special Olympics,” he told reporters. DeVos claimed she “wasn’t personally involved” in the cut, but defended the budget.

“I still can’t understand why you would go after disabled children in your budget,” Rep. Barbara Lee, D-Calif., told DeVos during a committee hearing in March.  Sen. Bernie Sanders called the budget cuts “unbelievable” on Twitter and even Ohio Republican John Kasich said they were “outrageous.”