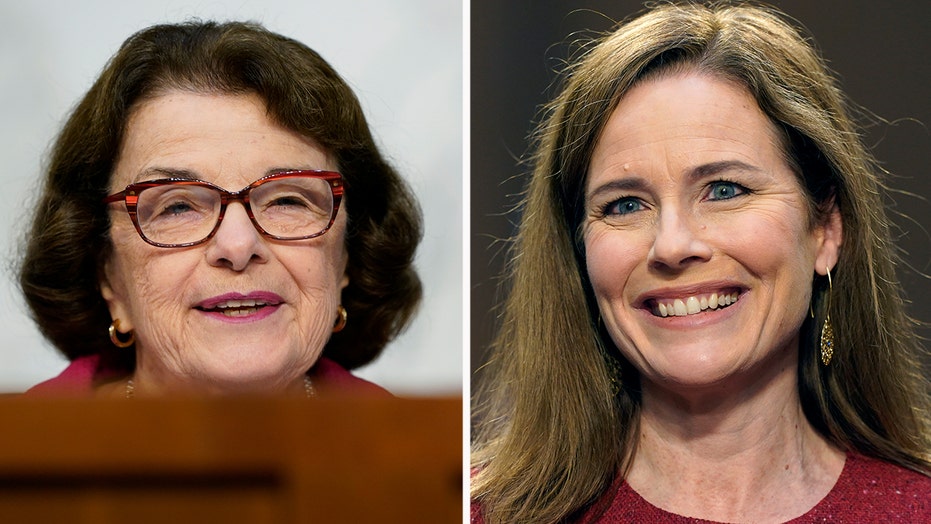 Barrett cites ‘Ginsburg Rule’ of ‘no hints, no previews’ when pressed by Dems on hot-button issues

Supporters of Judge Amy Coney Barrett’s nomination to the Supreme Court are promoting the “Ginsburg Standard” of not answering questions about hypothetical cases, as Barrett’s confirmation hearings get underway in the Senate.

“It would be injudicious for me to address. I think I have to avoid responding to hypotheticals,” the late Justice Ruth Bader Ginsburg says in a clip from her own Senate confirmation hearing in 1993.

BARRETT CITES GINSBURG RULE OF 'NO HINTS, NO PREVIEWS' WHEN PRESSED BY DEMS ON HOT-BUTTON ISSUES

“There is a grand tradition that I support that you can’t ask a judge who’s nominated for a judgeship … about a specific case,” Schumer says in a clip aired in the ad.

Democrats have been pressed to ask Barrett, a devout Catholic, how she would rule on cases dealing with issues such as abortion or same-sex marriage.

“You not only have a right to choose what you answer and not answer but in my view, you should not answer a question of what your view will be,” says Biden, in a clip from when he was a senator from Delaware.

The ad features a number of justices, including Neil Gorsuch and Sonia Sotomayor, refusing to engage in hypothetical cases.

Barrett cited the Ginsburg standard in Tuesday’s hearing when Senate Judiciary Committee ranking member Dianne Feinstein, D-Calif., asked during her confirmation whether the judge agrees with the late Justice Antonin Scalia's view that the Constitution does not guarantee a right to gay marriage.

BARRETT SAYS SHE KNEW 'FAITH WOULD BE CARICATURED,' 'FAMILY WOULD BE ATTACKED' IF NOMINATED TO SUPREME COURT

"I'm not going to express a view on whether I agree or disagree with Justice Scalia for the same reasons that I've been giving," Barrett said. "Justice Ginsburg with her characteristic pithiness used this to describe how a nominee should comport herself at a hearing: no hints, no previews, no forecasts. That has been the practice of nominees before her, but everybody calls it the 'Ginsburg Rule' because she stated it so concisely and it’s been the practice of every nominee since."

Barrett also reminded Feinstein of what she told Sen. Lindsey Graham, R-S.C., earlier in the day about how she and Scalia are two different people despite having a shared philosophy.

“I don’t think that anybody should assume that just because Justice Scalia decided a decision a certain way that I would too,” she said.

At another point in the hearing, Barrett also referenced Ginsburg when Feinstein asked if she agreed with Scalia's view that Roe v. Wade was decided incorrectly.

"Senator, I completely understand why you are asking the question, but again, I can't pre-commit or say, 'Yes, I'm going in with some agenda,' because I'm not," she said.

"It would actually be wrong and in violation of the canons for me to do that as a sitting judge," Barrett added.