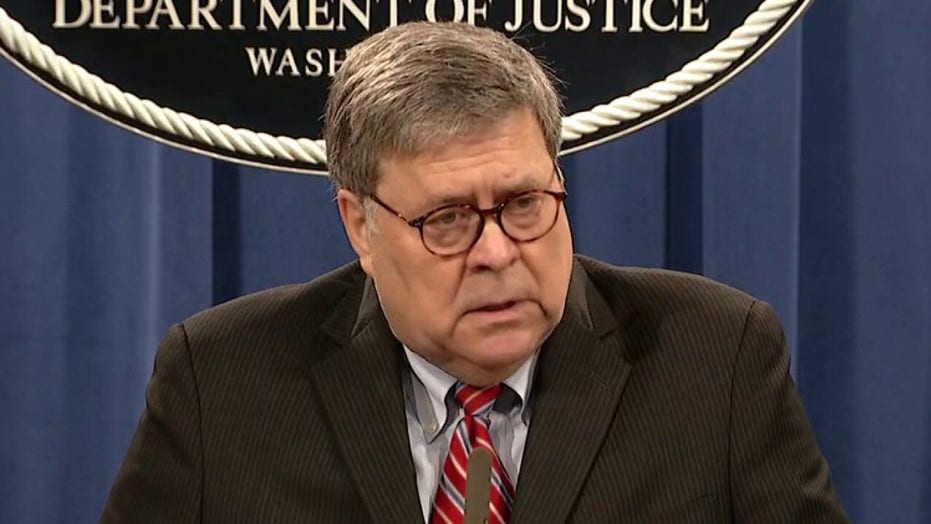 The Russians, it was revealed earlier this month, hacked into SolarWinds, a software company that manages information technology infrastructures. The hacking went on for at least months before it was detected and potentially put at risk some of the U.S. government's most important secrets. Pompeo had previously said the hack was "pretty clearly" done by Russia.

"I agree with Secretary Pompeo's assessment," Barr said Monday. "It certainly appears to be the Russians. But I'm not going to discuss it beyond that."

BARR SAYS HE HAS NO PLAN TO APPOINT ELECTION, HUNTER BIDEN SPECIAL COUNSELS

The comments come after Trump on Saturday cast doubt on whether it was Russia that executed the hack and downplayed the severity of the monthslong attack multiple U.S. senators have said approaches being an act of war.

"The Cyber Hack is far greater in the Fake News Media than in actuality," Trump said in a pair of tweets. "I have been fully briefed and everything is well under control. Russia, Russia, Russia is the priority chant when anything happens because Lamestream is, for mostly financial reasons, petrified of... discussing the possibility that it may be China (it may!)."

Russia denies that it was involved with the hack.

POMPEO: RUSSIANS ARE 'PRETTY CLEARLY' BEHIND HACK OF US GOVERNMENT

Barr's contradiction of Trump comes less than a month before the president will leave the White House after losing the election to Joe Biden. In that time he's become increasingly frustrated with a number of high-profile Republicans who have not backed his claim that he won the presidential election and that there was widespread fraud.

Barr himself said that the Department of Justice (DOJ) had not seen sufficient evidence of election fraud "on a scale that could have effected a different outcome in the election." Barr came under fire from Trump and his allies after that comment and Trump in a tweet later announced Barr's resignation before Christmas.

Trump has also launched broadsides on Republican Govs. Brian Kemp of Georgia and Doug Ducey of Arizona for certifying their state's election results after Biden won. He attacked Senate Majority Leader Mitch McConnell, R-Ky., for saying that Biden will be the next president after the Electoral College voted for Biden. And as recently as Monday he's gone after Georgia's lieutenant governor and secretary of state, both Republicans, for refusing to cede to his demands on investigating election fraud.

"What are those RINOS hiding?" Trump said.

Barr on Thursday also said that he has no plans to appoint a special counsel to investigate Hunter Biden or election fraud and that he sees "no basis now for [the federal government] seizing [election] machines."

Trump is reportedly considering demanding that those things happen. The New York Times reported that top aides, including White House Counsel Pat Cippalone and Chief of Staff Mark Meadows, forcefully opposed ideas, including of an election-related special counsel, Trump heard over the weekend from Sidney Powell. Powell, who visited the White House, is the lawyer who has spun tales of widespread election fraud conspiracies in recent weeks while losing consistently in court.

"If I thought a special counsel at this stage was the right tool and was appropriate I would name one," Barr said on the suggestion of Powell as a special counsel. "But I haven't and I'm not going to."