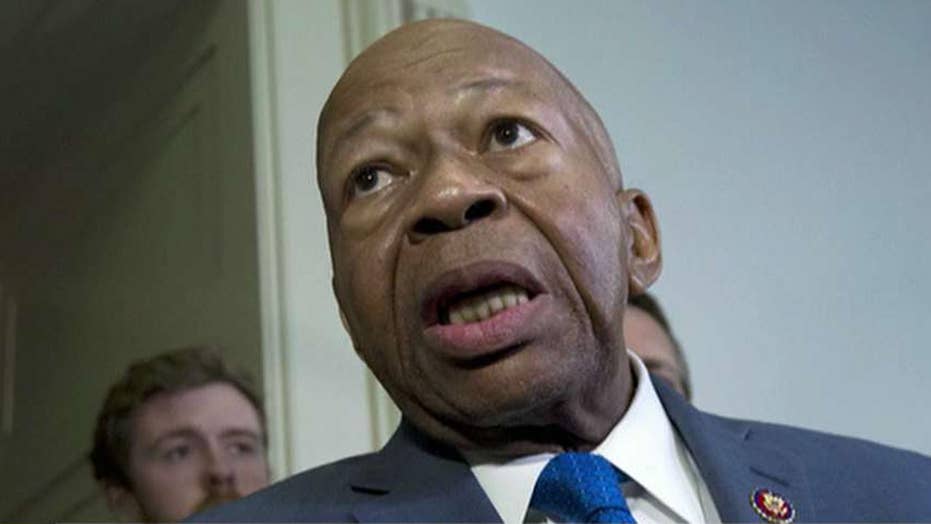 Baltimore officials and national Democratic officeholders fired back at President Trump Saturday after he tweeted criticism of Rep. Elijah Cummings, D-Md., who has represented parts of the city in Congress for more than 20 years.

"There is no greater champion for Baltimore and cities like Baltimore than Congressman Elijah Cummings. He has undoubtedly been and continues to be a hero across Baltimore and across our great country," Baltimore City Council President Brandon Scott said on Saturday.

Scott joined the mounting criticism of Trump over a morning tweet in which the president described Cummings' district as "a rat and rodent infested mess" where conditions are worse than those at the southern border. The tweet was an apparent response to Cummings who as chair of the House Oversight Committee had overseen a Congressional hearing earlier this month on conditions for migrants at government facilities. 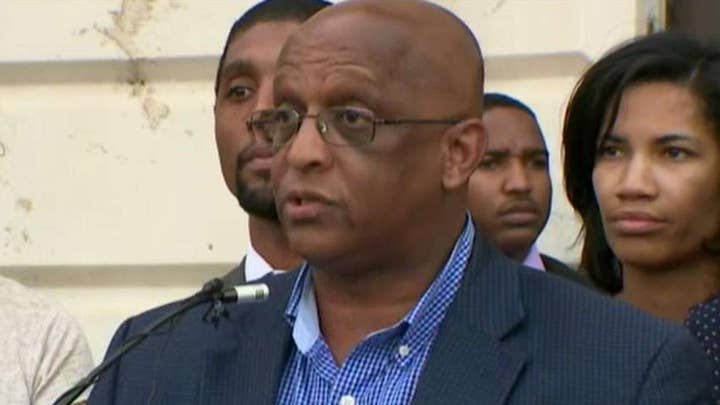 "It should be beneath the dignity of the President of the United States -- the person who's supposed to be the leader of the free world -- to disparage and personally attack a great American city and another great American leader," said Scott, who was accompanied by Baltimore Mayor Bernard Young.

"However, it is clear that it is not beneath President Trump. The president should be ashamed," he said before accusing Trump of failing to fulfill his duties as president.

"We know that Baltimorians and other individuals across the country live in housing that is sub-standard and that if President Trump and his [Housing and Urban Development] director ... got serious about making that agency work for the benefit of Baltimorians and people in cities like Baltimore instead of trying to cut the budget for that agency every year, the change that could be made," said Scott, making reference to HUD Secretary Ben Carson, who attended medical school in the city and served as a leading neurosurgeon at The Johns Hopkins Hospital.

Following the Saturday afternoon statement by Scott, Trump doubled down on his criticism of Cummings, tweeting: "Elijah Cummings spends all of his time trying to hurt innocent people through “Oversight.” He does NOTHING for his very poor, very dangerous and very badly run district!" The tweet included a video purporting to show a rundown area of West Baltimore.

"Mr. President, I go home to my district daily," Cummings tweeted responded to Trump's initial broadside. "Each morning, I wake up, and I go and fight for my neighbors. It is my constitutional duty to conduct oversight of the Executive Branch. But, it is my moral duty to fight for my constituents."

House Speaker Nancy Pelosi, D-Calif., defended Cummings as "a champion in the Congress and the country for civil rights and economic justice, a beloved leader in Baltimore and a deeply valued colleague."

"We all reject racist attacks against him and support his steadfast leadership," added Pelosi, a Baltimore native.

Sen. Bernie Sanders, I-Vt., a 2020 Democratic presidential candidate, tweeted Saturday that Trump's attacks were tied to his ongoing investigations of the administration.

"Here's what's really going on," Sanders tweeted. "@RepCummings has been busy revealing the failures of the Trump administration and exposing the greed of Trump’s friends in the pharmaceutical industry, and our racist president doesn't like it."

Sen. Elizabeth Warren, D-Mass., told Fox News Saturday that Trump's tweets were "ugly and racist and they are part of his overall pattern of trying to stir up as much hatred and dissension in America as possible."

Sen. Kamala Harris, D-Calif., said she is "proud" her campaign is headquartered in Cummings' district. "Baltimore has become home to my team and it's disgraceful the president has chosen to start his morning disparaging this great American city," she said.

Rep. Rashida Tlaib, a member of the so-called "Squad" of freshman Democratic lawmakers, tweeted of Trump: "Someone take away his phone.

"He has failed as a President and he is blaming everyone, but his incompetent self,"  Tlaib added. "He is in the most powerful position in the *world* and yet he has no policy agenda for the people. A hate agenda doesn't count."

NBC News correspondent Jenna Bush Hager, the daughter of former President George W. Bush, tweeted her own disapproval of Trump's statement, writing: "I taught in West Baltimore. I adore my kids, their parents, and grandparents. They all want the same thing I want for my kids: the chance for their children to have safe, happy and productive lives. Let’s think about the language we use, who it hurts."

Lt. Gov. Boyd Rutherford, also a Republican, tweeted: "Mr. President, @realDonaldTrump, I have substantial policy differences with Congressman @RepCummings. However, I hope your criticism is not directed at the many good and hard working people who live in the district."

Cummings represents Maryland's 7th Congressional District, which is 55 percent black and includes a large portion of Baltimore City. It is home to the national headquarters of the NAACP and Johns Hopkins University and Johns Hopkins Hospital. The district also extends into Baltimore and Howard counties.