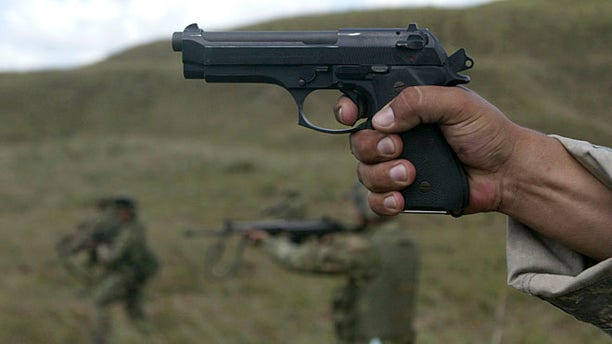 FILE: 2007: A U.S. army instructor fires with Colombian soldiers during a combat exercise in a southern Colombian. (REUTERS)

The Army wants to retire its supply of 9mm handguns and replace it with a more accurate and user-friendly model that also will provide soldiers with more “knock-down” power.

Army officials say their inventory of more than 200,000 semi-automatic Beretta M9 and Sig Sauer M11 pistols has become outdated, worn out and needs to be replaced with an updated model that also offers more reliability and durability.

They also are considering new ammunition, which has sparked considerable debate among military and civilian weapons experts, too.

“Advancements in firearms have taken place since the M9 was adopted nearly 30 years ago, and it is our intent to take advantage of these advancements,” a military spokesperson told FoxNews.com on Friday. “The Army is seeking to replace the M9 and M11 pistols with a handgun that is more accurate, ergonomic, reliable and durable than the current pistol.”

Officials seem opposed to an update version of the Beretta M9, despite the company offering to make changes.

"We have submitted numerous changes or product improvements that really address a lot of the shortcomings that are either perceived or real," Beretta development manager Gabe Bailey recently told Military.com.

The Army has been considering a change for several years and on July 29 will hold a so-called “industry day” to brief gun manufacturers about the competition requirements for a winning proposal.

The Defense Department will reportedly buy more than 400,000 new pistols if and when officials agree on a new model.

Beyond the 9mm’s durability issues, which Army officials says are costing them too much in repairs, soldiers also say the pistol needs a more ergonomic grip, its safety device too often locks inadvertently and its open-slide bullet chamber allows in too much dirty, which results in jamming.

Still, the other big issue appears to be about the caliber of the new ammunition, considering most experts argue a person must be hit with several 9 mm rounds to be killed.

“We are not dictating a caliber during the competition,” the spokesperson said. “A vendor may submit multiple calibers of ammunition. However, the ammunition must exceed the performance of the current M882 9mm round.”

Among those likely to be considered in the Modular Handgun System competition are the .40 and .45 caliber rounds.

The argument against the .40 caliber round is that its heavier weight and stronger recoil causes excessive wear on a 9 mm pistol.

There have been no reports on how much the new weapons will cost, amid budget concerns. However, in September 2012, Beretta received a 5-year, $64 million firm-fixed-price contract for up to 100,000 of its M9 9mm pistols, according to Defense Industry Daily.

Following industry day, the Army will release a draft Request for Proposal, which seeks input from manufacturers.

The Army will then consider the manufacturers’ comments and modify the request, if necessary. It will then hold a final industry day before issuing a final proposal before the end of the year.

The next phase will essentially be a tryout and elimination process, which officials say will be based on technical results and will rely “heavily” on soldier feedback.

“One of the primary requirements for this weapon system is to provide the soldier with increased terminal performance,” the spokesperson said. “Feedback from soldiers in the field is that they want increased ‘knock-down power.’ And the MHS program will evaluate commercially available weapons that meet that requirement.”