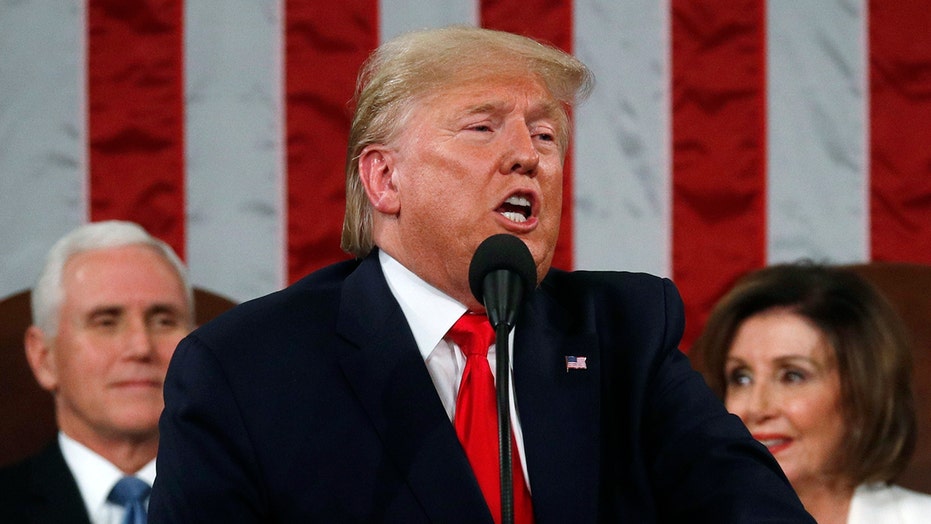 Left claims Trump's State of the Union address was racist

A federal appeals court on Friday unanimously ruled that more than 200 Democratic congressional lawmakers do not have standing to sue President Trump over allegations he violated the Emoluments Clause over foreign payments to his businesses.

“Because we conclude that the Members lack standing, we reverse the district court and remand with instructions to dismiss their complaint,” the Court of Appeals for the D.C. Circuit said in its ruling.

“The [House] Members can, and likely will, continue to use their weighty voices to make their case to the American people, their colleagues in the Congress and the President himself, all of whom are free to engage that argument as they see fit,” the court continued. “But we will not – indeed we cannot – participate in this debate.”

The court added that “the Constitution permits the Judiciary to speak only in the context of an Article III case or controversy and this lawsuit presents neither.”

Holding up a copy of the ruling as he departed Washington for a North Carolina event, Trump blasted the suit as a "phony" case.

“It was a total win,” he declared.

The ruling comes after the court ruled in August that Trump could challenge the lawsuit, saying the litigation raises the "unsettled" question of whether politicians have standing to sue a sitting president for running international businesses.

The Emoluments Clause is contained in Article 1, Section 9 of the Constitution and states that “No Title of Nobility shall be granted by the United States: And no Person holding any Office of Profit or Trust under them, shall, without the Consent of Congress, accept of any present, Emolument, Office, or Title of any kind whatsoever, from any King, Prince, or foreign state.”

More than 200 congressional Democrats brought the lawsuit against the president in June 2017, alleging that Trump violated the clause. Democrats argued that they had standing to sue because the clause says only Congress may approve foreign gifts and payments.

In a joint statement on Friday, Sen. Richard Blumenthal, D-Conn., and Rep. Jerrold Nadler, D-N.Y., both of whom helped organize the suit, said they were “disappointed” in the decision.

“Today’s decision was not a decision on the merits of our allegations that President Trump has been defying the Foreign Emoluments Clause, and nothing in today’s opinion changes the fundamental facts: President Trump has flagrantly and frequently violated the Constitution’s preeminent protection against corruption,” Blumenthal said, adding that they are evaluating “next steps.”

“We remain fully committed to doing everything in our power to hold President Trump accountable for his unacceptable, unconstitutional misconduct,” he continued.

Nadler downplayed the decision, saying it was a “technical dismissal” that “in no way condones” Trump’s alleged violations.

“The Founders recognized the dangers of foreign influence and corruption, and President Trump embodies those fears every day as he profits off of his presidency,” Nadler said.

Upon taking office, the president turned over control of his companies to his sons, Eric and Donald Trump Jr., but did not divest from them, meaning he still technically can benefit financially from the Trump Organization’s profits, including from foreign governments.

Since becoming president, the Trump Organization had secured dozens of valuable patents, including in China, and collected fees from lobbyists working for Saudi Arabia and other countries using his properties.

A federal appeals court, earlier this year, dismissed a similar Emoluments Clause lawsuit filed against Trump by the state of Maryland and the District of Columbia.

"I got sued on a thing called emoluments. Emoluments. You ever hear of the word? Nobody ever heard of it before," Trump said at an event in Pennsylvania last year.