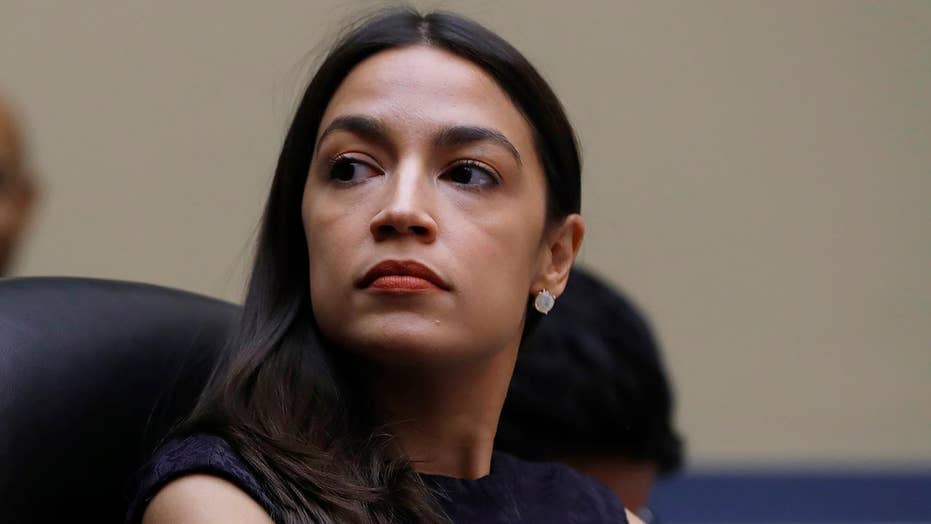 Rep. Alexandria Ocasio-Cortez, D-N.Y., warned Sunday there is "very real risk" President Trump will win re-election in 2020, sparking a rare response of its kind from the president: "I agree."

Her comments struck an unusually defensive tone for the 29-year-old progressive firebrand, as Democrats seek to winnow their list of 23 presidential contenders. Ocasio-Cortez also acknowledged that progressive frustration with House Speaker Nancy Pelosi was "quite real" and spoke bluntly on her initiative to repeal the Hyde Amendment, which bars most federal funding for abortion -- and 2020 Democrat frontrunner Joe Biden's abrupt reversal on the issue earlier this month.

"I think that we have a very real risk of losing the presidency to Donald Trump if we do not have a presidential candidate that is fighting for true transformational change in the lives of working people in the United States," Ocasio-Cortez told ABC News' Jon Karl on "This Week" in her first Sunday morning show appearance since she took office in January.

The president quoted the congresswoman in a tweet Sunday night, adding: "I agree, and that is the only reason they play the impeach card, which cannot be legally used!" He did not elaborate.

Ocasio-Cortez said she did not see herself endorsing a particular candidate "any time soon," however.

"I think it's quite real," Ocasio-Cortez. "I believe that there is a very real animus and desire to make sure that we are -- that -- that we are holding this president to account."

A growing progressive anger also has targeted Biden, who said earlier this month he could “no longer support" the Hyde Amendment, which he had backed for decades. Biden said the law makes a woman's right to an abortion "dependent on someone's ZIP code.”

The Hyde Amendment prevents the government from providing abortion funding except in cases of rape, incest, or when the health of the mother is at stake.

ABORTION ACTIVIST ACCUSES BIDEN OF INTIMIDATION: 'I THOUGHT HE WAS GOING TO HIT ME'

Last week, an abortion activist questioning Biden on his Hyde Amendment flip-flop said the former vice president got in the activist's face and attempted an arm grab. "I thought he was going to hit me," the activist said, after posting a brief viral video and photo of the encounter.

"In every poll, a plurality of Americans opposes public funding of abortions."

The activist also noted the numerous accusations by other women that Biden has made them uncomfortable in close personal encounters.

The Biden campaign did not respond to Fox News' request for comment on the matter. Ocasio-Cortez, asked whether Biden had handled the misconduct accusations appropriately, told Karl, "I think that's something that he has to kind of show the electorate, I think that I, you know, I think that it is an issue where there is a struggle, I'll be completely honest."

Ocasio-Cortez also said Democrats "probably" made a mistake by not pushing back on Bill Clinton's treatment of women during his presidency, but said the country has gone through an "evolution" in the years since.

But, on the Hyde Amendment, Ocasio-Cortez has been more forceful.

Pennsylvania Democrat Rep. Matt Cartwright says he endorsed Joe Biden before he could finish the sentence declaring his 2020 presidential run.

"It’s not the 70s anymore," Ocasio-Cortez said in an email to backers on Saturday, building support for a repeal of the Hyde Amendment. "This is 2019, and none of our leaders should be willing to stand by a policy that disproportionately harms low-income Americans and people of color just to suit the interests of anti-choice zealots. That ends now. We’re going to fight to repeal the Hyde Amendment, and let people access the care that they need. Sign your name if you stand for repealing the Hyde Amendment."

"Well, I'm encouraged by the fact that he is now against the Hyde Amendment. I think that that's where -- I think it's a very base level where all candidates need to be," Ocasio-Cortez told Karl. "I'm excited to be introducing a repeal of the Hyde Amendment via amendment -- we'll see where it goes -- for incarcerated women and the maternal and reproductive health care of incarcerated women is -- it should be guaranteed as it is with all women in the United States. And so I think it really depends -- and that's really what the Hyde Amendment is about."

"We're talking about 50, 51 percent of the American public being impacted by the realities of the Hyde Amendment," she concluded.

But, Democrats risked overplaying their hand on the issue, analysts warned, even as more conservative-dominated states have passed aggressive pro-life measures. A recent article in Slate by William Saletan, titled "Abortion Funding Isn’t As Popular As Democrats Think: Recent polls debunk much of what progressives believe," contains a sobering analysis of the issue for the Democrat field.

In this May 2017 photo, activists dressed as characters from "The Handmaid's Tale" chanted in the Texas Capitol Rotunda protesting SB8, a bill requiring health care facilities, including hospitals and abortion clinics, to bury or cremate any fetal remains whether from abortion, miscarriage or stillbirth. (AP Photo/Eric Gay, File)

Saletan concluded that while most Americans generally agree with Democrats on the issue of abortion and don't support defunding abortion clinics, the recent progressive push goes too far.

"On the question of direct payments [for abortion]," Saletan wrote, "most voters agree with the GOP. If Democrats make that question a litmus test, they’ll regret it."

Nevertheless, last week Illinois enacted a sweeping pro-choice law that eliminated spousal consent, waiting periods, criminal penalties for abortion providers and restrictions on abortion facilities, such as licensing requirements and health and safety inspections. It also repealed the state's Partial-birth Abortion Ban Act and established "that a fertilized egg, embryo, or fetus does not have independent rights under the law, of this State."

The Thomas More Society, a pro-life law firm based in Chicago, declared the bill tantamount to “legalizing the death penalty, with no possibility of appeal, for viable unborn preemies.”

Karl did not ask Ocasio-Cortez about her role in torpedoing Amazon's plan to locate a headquarters in New York, or a range of her policy proposals, prompting conservatives to dismiss the ABC sit-down as a softball interview.