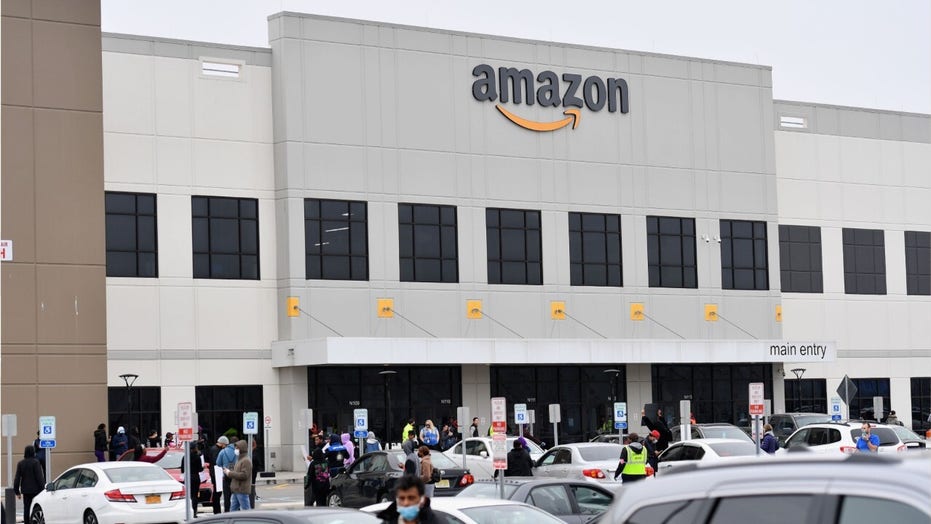 New York Attorney General Letitia James is calling for an investigation of Amazon after a warehouse employee was terminated after he took part in a staged walkout at Amazon's Staten Island, New York facility.

Rep. Alexandria Ocasio-Cortez, D-N.Y., on Thursday night called Amazon "racist & classist" over a leaked memo indicating the company was considering going on a public relations offensive against one of its employees who organized a walkout over the coronavirus-related working conditions in a Staten Island warehouse.

The memo said the employee was "not smart or articulate."

The Vice News story Ocasio-Cortez was reacting to quoted the memo, which was based on notes from a meeting Amazon CEO Jeff Bezos attended. It was also sent to many people within Amazon. It indicated that the company was considering shifting its PR strategy from a defense of its efforts to protect workers to an attack on the employee leading the walkout, Christian Smalls.

"He’s not smart, or articulate, and to the extent the press wants to focus on us versus him, we will be in a much stronger PR position than simply explaining for the umpteenth time how we’re trying to protect workers," Amazon General Counsel David Zapolsky said, according to Vice News.

Ocasio-Cortez, who is a member of the "squad" of four liberal freshman Democratic congresswomen and a vocal supporter of organized labor, slammed Amazon for its comments, joining what was an already large pile of commentators and elected officials criticizing the company for its refusal to work with Smalls on his demands.

"Amazon's attempt to smear Chris Smalls, one of their own warehouse workers, as not 'smart or articulate' is a racist & classist PR campaign," Ocasio-Cortez tweeted. "If execs are as concerned abt (sic) worker health & safety as they claim, then they should provide the full paid sick leave ALL workers deserve."

"That’s not true. In fact, Mr. Zapolsky didn’t even know the race of the person at the time he made his comments," the spokesman said.

Vermont Sen. Bernie Sanders, whose presidential campaign Ocasio-Cortez and two other members of the "squad" have endorsed, has also been highly critical of Amazon during the coronavirus pandemic.

"Jeff Bezos: The richest man in the world. Amazon: Pays $0 in federal income taxes. Workers: Unable to get the protection they need," Sanders tweeted in response to the Amazon workers' organizing efforts. "The greed has got to end. I stand with Amazon workers who are fighting for their rights."

Zapolsky continued in the memo obtained by Vice News: "We should spend the first part of our response strongly laying out the case for why the organizer’s conduct was immoral, unacceptable, and arguably illegal, in detail, and only then follow with our usual talking points about worker safety... Make him the most interesting part of the story, and if possible make him the face of the entire union/organizing movement.”

A statement from Zapolsky to Vice said that Zapolsky was emotional when he wrote the comments, though he did not apologize.

Amazon previously justified its firing of Smalls by saying that Smalls "was found to have had close contact with a diagnosed associate with a confirmed case of COVID-19 and was asked to remain home with pay for 14-days... Despite that instruction to stay home with pay, he came onsite [Monday], March 30, further putting the teams at risk."

"Like all businesses grappling with the ongoing coronavirus pandemic, we are working hard to keep employees safe while serving communities and the most vulnerable," the company said. "We have taken extreme measures to keep people safe, tripling down on deep cleaning, procuring safety supplies that are available, changing processes to ensure those in our buildings are keeping safe distances..."

Smalls has spoken out independently, detailing what his efforts to protect Amazon workers in the Staten Island warehouse have looked like.

"I've been trying to raise this awareness for weeks and I had gotten no response," Smalls told comedian Jimmy Dore in an appearance on his Youtube show, which was posted online Thursday, saying that he had gone to Amazon's human resources department in the first week of March. "I decided to work behind the scenes, I couldn't sit back and do nothing, I stayed home every day in my room, figuring out a way to get people out of that building. I called and emailed every department in New York -- state department, the CDC, the governor's office, the local police department, OSHA, I filed a complaint with everybody ... they didn't respond to me ... but I at least tried. I tried everything in my power to get those people out of that building and I still am."

New York Mayor Bill de Blasio has called for an investigation into Amazon over the dispute with Smalls. So has New York Attorney General Letitia James. Smalls told the New York Post that there were at least 10 confirmed cases of the coronavirus in the Staten Island warehouse earlier this week.