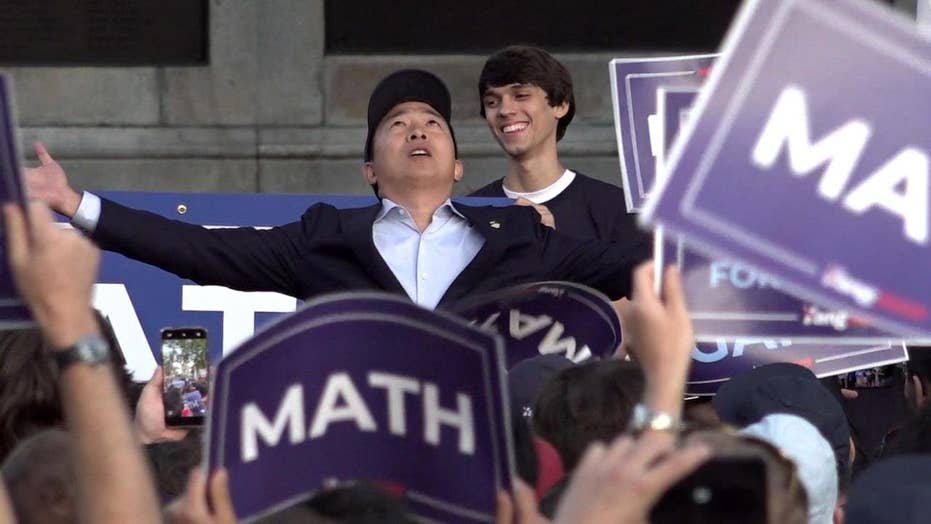 Andrew Yang trying to 'peel off' Trump supporters, woo them to 'Yang gang'

Yang, whose hallmark campaign promise is to hand out $1,000 a month to every American, said at several New Hampshire campaign stops that he's "peeling off" disaffected Trump voters by the tens of thousands. However, New Hampshire Republicans were quick to dispute that.

But the candidate who emerged from obscurity last year is piquing the interest of at least a handful of Trump supporters that have shown up at his New Hampshire events in recent weeks.

"I voted for Trump in 2016 and honestly, I'll probably vote for him again if Yang doesn't make it through," New Hampshire voter Anthony Hegstrom said, adding that the politics the rest of the Democratic ticket is selling don't appeal to him. "Most of what's there right now is way too far left or too typical mainstream. Biden's just the same old story and I voted for Trump for the idea that it's something different."

The Yang campaign is generating more enthusiasm and money than a handful of his Democratic rivals as well. The campaign announced earlier this week that it had raised $10 million, beating out New Jersey Sen. Cory Booker, former Texas Rep. Beto O'Rourke, and closing in on California Sen. Kamala Harris' fundraising numbers. Each candidate will only go as far in the race as their donation dollars will stretch.

"Many working Americans do not feel like Democrats are speaking to them," Yang told Fox News at a campaign stop in Nashua, N.H. "Just the fact that I'm focused on some of the economic issues that they're seeing in their communities, makes them at least receptive."

With Former Vice President Joe Biden still leading in a handful of polls, voters like Russell Peterson, a lifelong conservative and Trump voter, converted into a 'Yang gang' devotee, think the Democrats could see a repeat of 2016.

"If the DNC was smart they would wise up," said Peterson, who is from North Carolina. "There's nobody talking like Andrew Yang is talking."

Peterson, his wife Elasa, and his toddler Zephaniah have been driving around in the country following Yang and vlogging the experience on his Youtube channel. He said he represents the forgotten "broke folk vote," arguing that Yang is the first candidate to propose solutions to rampant automation.

"It makes sense to me that it's not immigrants, it's automation that's taking the jobs in America," Peterson said after a Yang rally in Cambridge, Mass. "You walk into a Walmart, and where there used to be 20 registers, now you have one person managing all these self-checkouts."

But while Yang has been able to enthuse people who show up at his rallies, he still has a long way to go to the top of the Democratic ticket. A St. Anselm College poll released this week has Yang scraping up just 2 percent of likely New Hampshire primary voters.

Southern New Hampshire political science professor Dean Spiliotes said that with his small but loyal base, Yang is the type of candidate that will stay in the race to the end.

"There is a tendency to write him off as a little bit of a curiosity," Spiliotes said. "But I do think it's instructive for other candidates to stop and think what is it about his message that is appealing to this group of voters who might not typically vote Democratic."

Another right-leaning New Hampshire voter, Chester Deorocki II, likes his message around automation – he just isn't sure $1,000-a-month promise is a smart move.

"He's got to come around to my generation," said Deorocki, 65, who manages a trucking company. "He's got to blend his ideas. They can't be all one-sided. [...] Giveaways weren't in my generation."

Among the other Democrats in the field, Deorocki said the constant Trump-bashing could end up backfiring.

"I think they got to stop bashing Trump and telling me what they want to do," Deorocki said. "Because otherwise, they'll help to elect him."