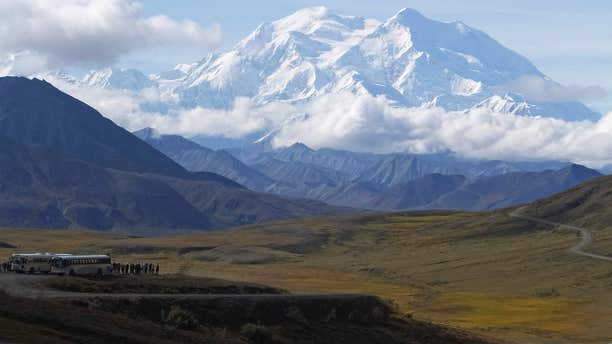 In this photo taken Aug. 26, 2016, sightseeing buses and tourists are seen at a pullout popular for taking in views of North America's tallest peak, Denali, in Denali National Park and Preserve, Alaska. (AP)

Among Donald Trump's many promises on his way to the White House was a tweeted vow to change the new name of North America's tallest mountain back to Mount McKinley.

The Obama administration renamed the Alaska peak Denali in a symbolic gesture to Alaska Natives ahead of the president's visit to the state last year.

Alaskans long have informally called the mountain Denali — "the great one" in Athabascan. But the federal government recognized the name invoking the 25th president, William McKinley, who was born in Ohio and assassinated early in his second term. McKinley never set foot in Alaska.

In his tweet, Trump called the name switch a "great insult to Ohio."

But if he indeed moves to undo it, Trump can expect pushback from Alaskans.

"We wanted that change for a long time, and now we finally have it, and we need to leave it alone," said Victor Joseph, president of Tanana Chiefs Conference, a consortium of 42 Athabascan tribes in Interior Alaska. The organization spent years advocating for what they consider the 20,310-foot peak's original name.

"It was an insult to the first people of this land when they took away the name and gave it to somebody else," Joseph said.

It's unclear at this early stage if Trump will take action. Changing the name would require a presidential executive order or an act of Congress, according to the federal board that oversees place names.

Troy Eid, chairman of the Indian Law and Order Commission and a member of Trump's transition team, said in an email Tuesday he was not in a position to comment.

The three Republicans who make up Alaska's congressional delegation either declined to comment or did not respond to requests for comment. Sen. Lisa Murkowski — who called for Trump to leave the Republican ticket after the emergence of a recording of Trump making lewd comments about women — long advocated for the mountain's Alaska Native name and thanked President Barack Obama for embracing it.

Republican Ohio Rep. Bob Gibbs slammed the name swap as Obama's "constitutional overreach," and said he would look at trying to prevent it. This week, his spokesman Dallas Gerber said Gibbs hasn't decided what legislation he'll introduce in the next Congress.

Alaska had a standing request with the federal government to rename the mountain dating to 1975, when a state board adopted the Denali name.

Ohio Rep. Ralph Regula then began the tradition of filing legislation to keep the Mount McKinley name. Active legislation over the years blocked the federal U.S. Board on Geographic Names from taking up the issue.

The change came about when Interior Secretary Sally Jewell issued an order citing a 1947 law that allows her agency to replace names unilaterally when the board fails to act within a reasonable time.

Legislation seeking to maintain the Denali moniker theoretically could again stall the process, according to Lou Yost, the board's executive secretary.

Added Interior Department spokeswoman Amanda DeGroff in an email to The Associated Press: "It would be a mistake to undo something that Alaska and Alaska Natives have wanted for decades and the President and the Secretary are proud to have supported."