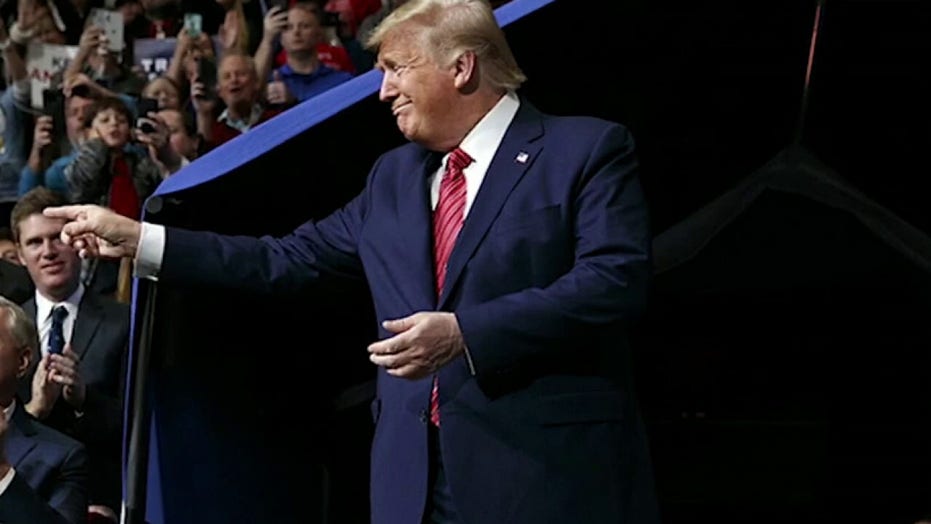 PORTSMOUTH, N.H. – President Trump will spotlight the power of incumbency on Saturday night as he holds a rally in the key general election battleground state of New Hampshire.

The Trump reelection campaign says that Air Force One – one of the most iconic symbols of the presidency and the power that comes with it – will be the backdrop for the president’s rally in Portsmouth.

GOP GOV. OF N.H. TO GREET THE PRESIDENT BUT NOT ATTEND TRUMP RALLY

“The backdrop of the rally will be Air Force One,” Trump campaign senior adviser Corey Lewandowski said on Thursday. “The president will come in. He’ll come down the stairs.”

The rally is being held outdoors, on the tarmac next to a hangar at Portsmouth International Airport, in the state's Seacoast region.

Trump is far from the first president to use Air Force One as a powerful campaign tool. For years, his predecessors have held rallies on airport tarmacs with the majestic plane as a backdrop. The plane is a potent symbol and holding a rally at an airport tarmac eliminates the need for a presidential motorcade, saving time, money and local traffic issues.

Presidents George W. Bush and Barack Obama – Trump’s immediate predecessors in the White House – used Air Force One at some of their rallies. But Trump – ever the salesman and a president with a keen eye for optics – used the plane quite often during the autumn of 2018, as he campaigned for down-ballot Republicans leading up to the midterm elections.

The taxiing of Air Force One up to Saturday’s rally site and the use of the plane as a backdrop may be a test run for future rallies as the president campaigns this summer and autumn for a second four-year term in the White House.

The president’s rally will be his second since the coronavirus pandemic swept across the country in March, forcing most Americans to huddle in their homes and triggering the freefall of much of the nation’s economy.

The first rally – last month in Tulsa, Okla. – was held indoors at an arena.

The president and his campaign touted a few days ahead of the event they had received 1 million requests for tickets to the rally, which was Trump’s first since the coronavirus swept across the nation in March.

But the crowds never materialized, and large portions of the arena’s upper deck were empty as the president spoke.

The Trump campaign pushed back on suggestions that president failed to draw a big enough crowd, noting that the event attracted over 4 million viewers “across all of the campaign’s digital media channels” and spotlighting that Fox News – which carried the event live – had its best Saturday night ratings in its nearly 25-year history.

A few days after the Tulsa rally, Lewandowski said on "New Hampshire Today with Jack Heath," a popular center-right morning news-talk radio program that "I think a fundamental mistake was made. Over promising and under-delivering is the biggest mistake you can make in politics.”

Lewandowski – who managed Trump’s first presidential campaign from its inception in 2015 until June of 2016 and who remains close to the president – was asked during an appearance Thursday on the same radio program if he had any estimate about the expected crowd size for the New Hampshire rally.

“I learned from the Tulsa, Okla., thing, never make an expectation,” he answered.

The rally comes as the nation’s death toll from the pandemic has topped 130,000 and the number of new cases of the COVID-19 disease caused by the virus topped 3 million. Public health officials continue to urge Americans to avoid large crowds, social distance and wear masks when in close proximity to other people.

Saturday's rally is also being held as a majority of states across the country are experiencing spikes in new coronavirus cases. More than 20 states have paused or reversed moves to reduce coronavirus restrictions. But it’s a different story in New Hampshire, which is one of only a handful of states where the number of new cases of coronavirus has declined in recent weeks.

When announcing the event on Sunday, the Trump campaign emphasized that there would be "ample access to hand sanitizer and all attendees will be provided a face mask that they are strongly encouraged to wear.”

And Republican Gov. Chris Sununu of New Hampshire said on Monday “it is imperative that folks attending the rally wear masks.”

Lewandowski highlighted on Thursday that “if people want to socially distance, they’ll be able to do that … If people don’t want to get too close, they’ll have that opportunity. But it will be up to each and every person to decide if they want to come and attend this rally or not.”

And he shared that “there will be new protocols in place but there will be ample room to spread out and be away from each other if that’s where they want to be and to be able to hear the president live.”

Sununu – a supporter of the president who enjoys a close working relationship with Vice President Mike Pence – is running for reelection in November for a third two-year term steering New Hampshire, which is very much a purple state.

The governor announced on Tuesday that he’ll greet the president after Air Force One lands but that he won’t be attending the rally.

“As the governor, I am always going to be there to greet the president and I will be there to do that,” Sununu told reporters.

But Sununu went on to explain “I will not be in the crowd of thousands of people… As the governor, I try to be extra cautious for myself and the family.”

Asked if he was disappointed that Sununu won’t be attending the rally, Lewandowski said “we talk to the governor a lot. We’re very excited that he’s going to be there to greet the president when Air Force One arrives. I know he’s got a very busy scheduled but we also know he fully supports this president’s agenda and we’re grateful for that.”