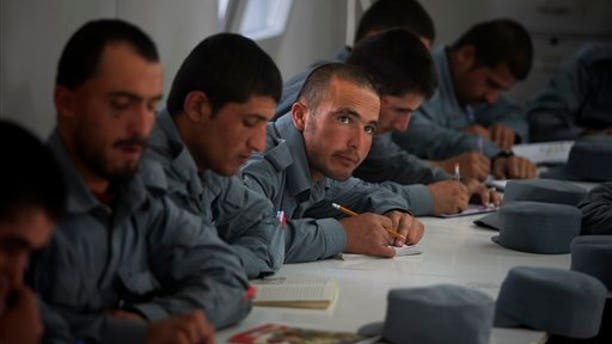 In this Nov. 7 photo, new Afghan police recruits attend a literary class at Central Training Center on the outskirts of Kabul. (AP Photo)

Most members of the Afghan security force are illiterate. Many are on drugs. They regularly demand bribes as do their superiors. And several times over the past year, they've turned on their trainers.

The Afghan border police officer who killed six American troops in eastern Afghanistan Monday is just the latest example of how challenging it is for NATO forces to train and equip hundreds of thousands of police officers and soldiers to enforce law and order on their own by the Obama administration's 2014 target.

After offering higher salaries to recruits and bringing on more trainers, NATO has built up the Afghan National Police from 95,000 to 120,000 over the past year, and the Afghan National Army from 97,000 to 138,000. U.S. Lt. Gen William Caldwell, the commander in charge of training, has cited tremendous improvements in propping up the security force since last year.

But for the police force in particular, the challenges may be too daunting. NATO is relying on a six-week basic training course to transform villagers into sharpshooting men of the law. And with the Taliban continuing to lure disenchanted citizens to its side, some warn that the motley mercenaries fighting on the side of Kabul are nowhere close to being able to stand up on their own.

"When you start with the raw material that you have, which is illiterate villagers ... you can't make them into a literate policeman in six weeks," Peter Galbraith, a former deputy envoy to Afghanistan for the United Nations, told FoxNews.com.

Galbraith, who falls on the more skeptical side of the spectrum, said a functional security force by 2014, or within any reasonable timeframe, is simply "not achievable." While the nation's Army is considered the most successful branch of the nation's security, he said, Afghanistan is still a "one-legged stool" -- with the central government and police force lacking stability and competence.

Police recruiters and trainers face a tougher challenge given that police officers are far more likely to be killed on the job, making it an unattractive vocation for the country's best and brightest. A study released by the Government Accountability Office in early 2010 reported that up to 41 percent of police recruits were testing positive for drug use, depending on the province.

One official quoted in the report said the number could be higher, since opiates flush out of the system quickly and many recruits who tested negative showed opium withdrawal symptoms during training.

But a NATO official, while saying any drug use is unacceptable, told FoxNews.com that a subsequent test of all police officers in June showed between 8 and 9 percent testing positive. The official said those who test positive are sent through treatment, monitored and kicked out of the force if they return to drug use.

Attrition is cited as another big concern in the police force, and the prevalent illiteracy makes their job particularly difficult, given that police work in the traditional sense involves a fair amount of paperwork and bookkeeping. According to a recent NATO Training Mission report, approximately 11 percent of enlisted personnel are literate. Some can't recognize numbers, meaning basic tasks from putting together an arrest report to jotting down the serial number on a weapon cannot be performed.

"There's been a huge brain drain after three decades of ongoing war," said Malou Innocent, a foreign policy analyst with the Cato Institute who visited Afghanistan in May. She said the lack of a competent security force has plagued U.S. and NATO efforts to hold down territory once it's been cleared of Taliban control, warning that this problem could demand a prolonged U.S. presence.

"If there's no Afghan army or police that can stand up when we stand down, then we're looking at this sort of perpetual U.S. presence to keep Afghanistan stable," she said.

NATO has tried to correct some fundamental problems with the training regimen. The coalition has brought more trainers on board, though Caldwell is calling for an additional 900. Salaries have been raised to as high as $240 a month and trainers have focused heavily on reading and writing skills.

According to the November report, many police recruits were originally hired without formal training, opening the door for corrupt officers who abused members of the population and fostered a "negative public perception" of the police as a whole. NATO has since moved to ensure recruits are trained before they're assigned.

But Galbraith said bribery is still a huge impediment, not just to the public trust but the economy.

He said officers are known to demand bribes at checkpoints along the roads that Western forces have spent billions to build for the sake of stimulating local commerce. The catch is, the bribes can exceed the value of the goods local farmers are trying to transport, effectively preventing them from trying to sell their crops.

Plus, there have been several incidents over the past year where officers and soldiers have killed U.S. and NATO forces, underscoring how hard it is to screen recruits in a nation where many applicants come to the table with not much in the way of a paper trail. An Afghan army soldier was implicated in the death of two U.S. Marines earlier in November in Helmand province. An Afghan Army sergeant killed two U.S. civilian trainers in July before being killed. That was shortly after another soldier killed three British troops.

The individual who killed six on Monday did so in the middle of a training mission. That incident is under investigation by a joint Afghan and NATO team.

NATO did not respond to a request for comment.

During a roundtable with bloggers on Nov. 9, Caldwell said the training mission had made "significant progress" over the past year, noting that pay had been increased to combat bribery and desertion.

"This progress has demonstrated an establishment of an enduring foundation for the generation of soldiers and police, the dramatic expansion of their end strength and their improved professionalization that's occurring," he said. But he said illiteracy and attrition remain top concerns, calling for a "sense of urgency" going forward and expressing optimism that the trainers could reach the goal of an Afghanistan "secured by Afghans."