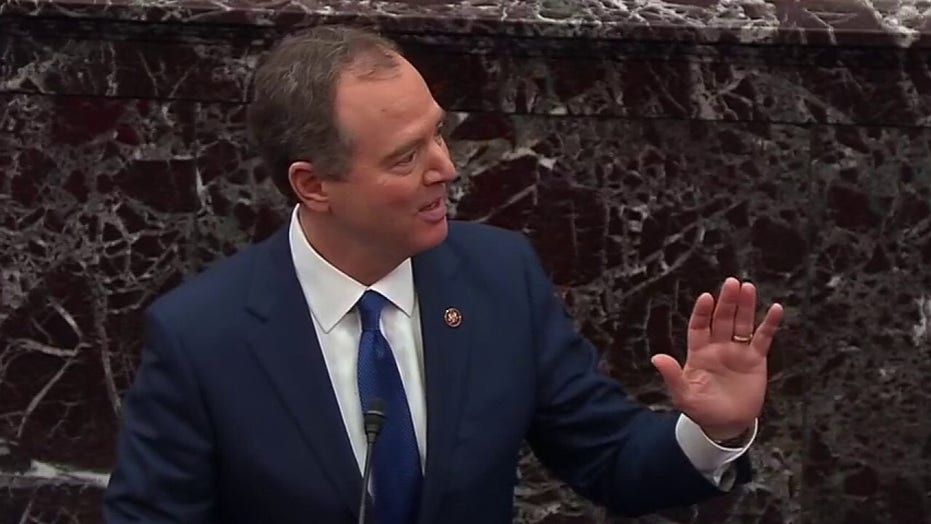 Impeachment question: Would Obama hypothetically have had the authority to seek investigation of Romney's son?

House manager Adam Schiff, D-Calif., Wednesday said former President Obama would have been impeached if he had done what President Trump has been charged with in the first article of impeachment.

Schiff was responding to Harvard Law Professor Alan Dershowitz’s argument that a president can’t be impeached for a quid pro quo if he believes it’s in the country’s interest.

Schiff called the defense’s example of Obama being caught on a hot mic in 2012 telling former Russian President Dmitry Medvedev he would have more “flexibility” after his re-election a “poor analogy” and “whataboutism.”

“But let’s use that analogy and make it more comparable to today and see how you feel about this scenario,” Schiff told the Senate.

He suggested the hypothetical example of Obama telling Medvedev, “I know you don’t want me to send this money to Ukraine cause they’re fighting and killing your people. I want you to do me a favor though,” Schiff said, echoing wording in Trump’s July call with Ukrainian President Volodymyr Zelensky in which he allegedly asked him to investigate the Bidens.

“I want you to do an investigation of Mitt Romney and I want you to announce you found dirt on Mitt Romney,” Schiff continued with his hypothetical. “And if you’re willing to do that quid pro quo, I won’t give Ukraine the money to fight you on the front line. “

Schiff then asked senators if there is any question Obama would have been impeached for that kind of conduct.

“That’s the parallel here,” he said.

Sens. Lindsey Graham, R-S.C., and Ted Cruz, R-Texas, asked in the hypothetical whether or not Obama would have had the authority to seek an investigation into Romney's son if he had evidence he was earning $1 million a year from a corrupt Russian company and Romney had acted to benefit that company.

Republicans have alleged former Vice President Joe Biden used his White House position to help his son, Hunter, while he served on the board of a Ukrainian oil company, but no evidence of wrongdoing has been found.

Schiff answered that “for a president to withhold military aid from an ally [or] to benefit an adversary to target their political opponent is wrong and corrupt. Period. End of story.”

He added that “rationalizing” that conduct is impeachable.

Earlier, Dershowitz argued that even if there was a quid pro quo by withholding $391 million in military aid to Ukraine it wouldn’t matter because “if a president does something which he believes will help him get elected in the public interest, that cannot be the kind of quid pro quo that results in impeachment.”