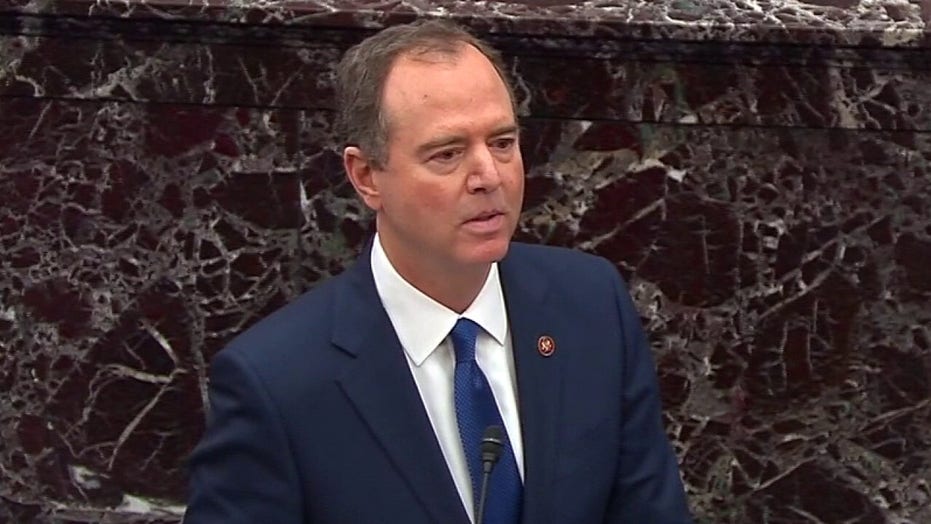 Schiff: I don't know who the whistleblower is, haven't met them or communicated with them

House manager Adam Schiff answers a question about the whistleblower at the Senate trial of President Trump.

House impeachment manager Adam Schiff, D-Calif., denied knowing the identity of the Trump whistleblower during the president's trial on Wednesday and claimed that no one from the House Intelligence Committee was ever involved in coaching them.

Sens. Josh Hawley, R-Mo., and Jerry Moran, R-Kan., submitted a question to the House managers about the whistleblower's possible political bias and asked if they ever had any professional relationship with former Vice President Joe Biden.

Schiff discussed the importance of maintaining the privacy of the whistleblower, before addressing rumors that he and his staff were in communication with them before they lodged their official complaint.

"The committee, including its staff, did not receive the complaint until the night before," Schiff continued. "We had an open hearing with the active [intelligence] director on September 26, more than three weeks after the legal deadline by which the committee should have received the complaint." 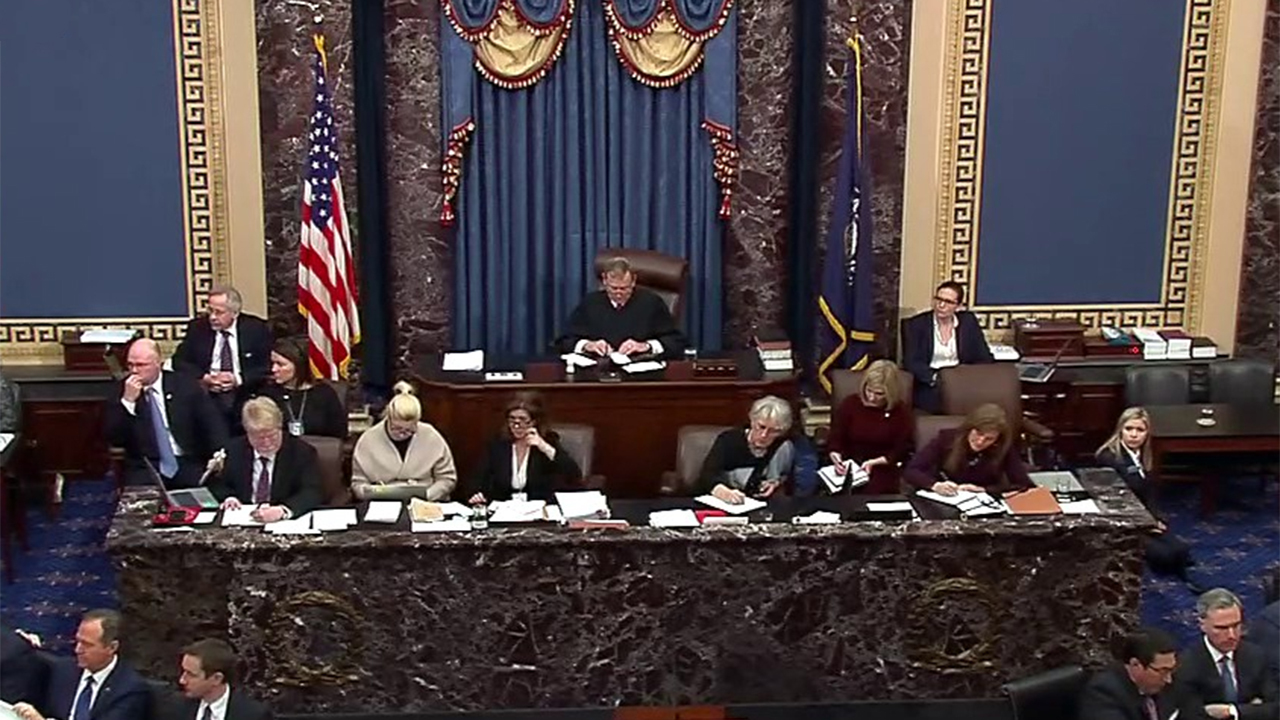 The House Intelligence Committee chairman called rumors of his behind-the-scenes involvement a "conspiracy theory" and said he wouldn't elaborate further, for fear of revealing sensitive information.

"In short, the conspiracy theory, which I think was outlined earlier that the whistleblower colluded with the Intel Committee staff to hatch an impeachment inquiry is a complete and total fiction," he said.

"This was, I think, confirmed by the remarkable accuracy of the whistleblower complaint, which has been corroborated by the evidence we subsequently gathered in all material respects. So I'm not going to go into anything that could reveal or lead to the revelation of the identity, the whistleblower."

Schiff also defended his congressional staff against accusations of wrongdoing and collusion.

"I can tell you, because my staff's names have been brought into this proceeding, that my staff acted at all times with the most complete professionalism," he explained.

"I am very protective of my staff, as I know you are. And I'm grateful that we have such bright, hardworking people working around the clock to protect this country and have served our committee so well. And it really grieves me to see them smeared." 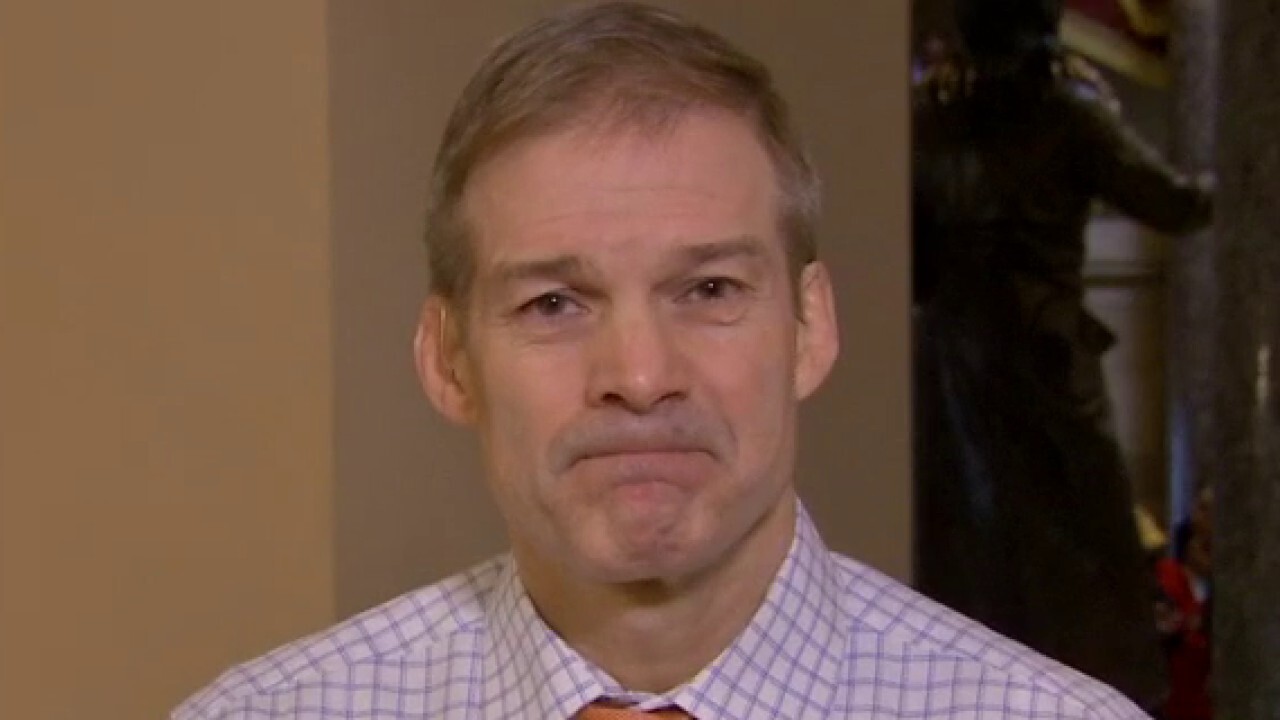 "I think they were complicit in working with the whistleblower to come forward with his complaint and start this entire impeachment inquiry," McCaul said on "Fox & Friends."

"I think that's why Adam Schiff is so protective of the whistleblowers[sic] because he is concerned about the truth that will come out if we get access to him."

Schiff also squared off against Rep. Jim Jordan, R-Ohio, during a hearing in November after Jordan accused him and his staff of speaking with the whistleblower in private.

"I do not know the identity of the whistleblower and I’m determined to make sure that identity is protected," Schiff replied. "But as I said ... you’ll have an opportunity after the witnesses testify to make a motion to subpoena any witness and compel a vote."

Trump called Schiff a "fraud" during a White House news conference in October and said he believes the California Democrat helped write the whistleblower complaint.

Hawley later told Fox News that Schiff frequently changed his story. He also said the GOP would be wise to continue its pursuit of this line of questioning, as the impeachment trial progressed.

“I don't believe anything he says on that because he's lied and changed his positions multiple times, which is just weird," Hawley said. "I mean, why would you do that? It's a very relevant set of questions and I imagine we might hear more of it."

Fox News' Gregg Re and Marisa Schultz contributed to this report