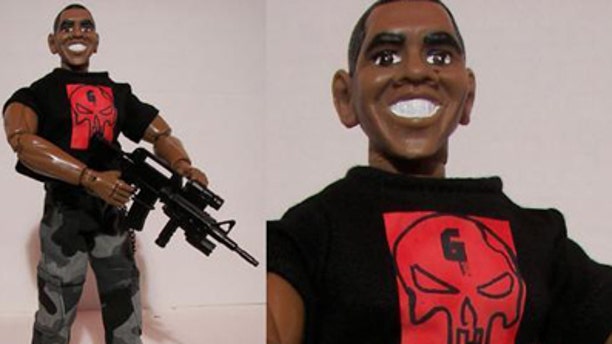 The raid on Usama bin Laden's compound was like something out of a movie. Now President Obama's role is being commemorated in the form of an action figure.

Connecticut company Herobuilders, which is behind a whole line of politically themed dolls, has released what it calls the "Rambama Action Figure." The semi-likeness of the 44th president appears to dress him up like an ultra-bad member of the Navy SEALs Team 6, which conducted the raid on bin Laden's Pakistan hideout nearly two weeks ago.

The toy depicts a muscular -- albeit plastic -- Obama, toting a rifle and dressed in a black-and-red shirt with a menacing skull and the number "6" emblazoned on it.

The endorsements on the company's website, though, are far from flattering.

Under the section titled, "Read What Great Americans Are Saying About This Doll," commenters described the toy as "horrendous," "in poor taste" and "disgraceful."

"What an insult to true American people and the Navy Seals," one individual wrote.

A representative for the company could not be reached for comment.

The item is going for $34.95, and joins a line of other Obama action figures, including a more staid version of the president in a suit and tie.