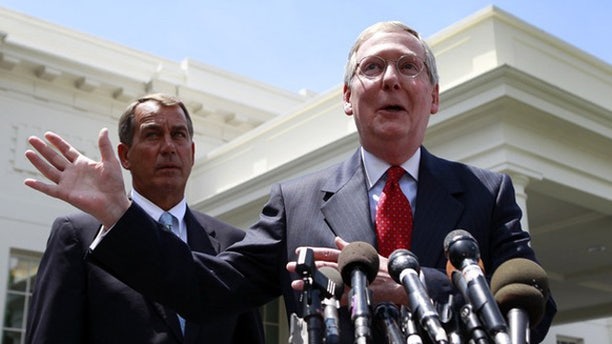 Republican leaders on Sunday sought to gain the moral high ground in the wake of ethics charges against Democratic Rep. Charles Rangel, but with Republicans handling ethical problems of their own, the leaders tried to keep the focus on jobs and the economy.

House Minority Leader John Boehner and Senate Minority Leader Mitch McConnell said November will, more than anything, be about spending and the Democrats' "job-killing" agenda. They made clear that the economy would continue to play a lead role in the GOP campaign message as members fan out across the country for the August recess.

"The Democrats' biggest problem is they're spending too much, taxing too much, borrowing too much, and their job-killing programs are what's on the mind of the American people," McConnell said on "Fox News Sunday." "And I think that's what will determine the outcome of the election this fall."

Boehner said the central theme he wants his members hammering as they return to their home districts is to explain why voters should trust them to address their concerns over taxes, spending and jobs creation.

"We've been listening to the American people. It's pretty clear they want change," he told "Fox News Sunday."

But Boehner said the Rangel case certainly works to Democrats' disadvantage. He cited the probe as evidence of a broken promise -- House Speaker Nancy Pelosi's 2006 pledge to "drain the swamp" in Washington.

"Nancy Pelosi said four years ago that it was time to drain the swamp, and I cannot believe it's taken some two years to investigate the Charlie Rangel case," he said. "But the fact is she's not kept her promise. The swamp is alive and well."

Rangel was hit this past week with 13 ethics charges by the panel investigating the alleged violations. If he does not negotiate a settlement, the case is expected to go to trial in the fall -- in the final run-up to the November election. On top of that, Rep. Maxine Waters, D-Calif., now faces a possible ethics trial over claims that she used her position to help arrange for federal bailout funds for a bank associated with her family. Both Waters and Rangel deny the allegations against them.

"I'm not nervous," she said on ABC's "This Week." Pelosi continued to dismiss a controversial remark made last month by White House Press Secretary Robert Gibbs that the House could lose the majority.

"I don't spend a whole lot of time thinking about what the president's employees say about one thing or another. ... You know what? I'm speaker of the House," she said. "We have a solid plan of messaging and mobilizing at the grassroots level and management of our campaigns. And we have a 2-to-1 advantage money-wise. So we feel very confident about where we are, whether that's well known to that gentleman or not."

Pelosi said that under her leadership, the House did drain the so-called swamp by passing "the most sweeping ethics reform in the history of the Congress." She claimed to be "out of the loop" on the Rangel probe and suggested ethical misdeeds would not be tolerated.

"Any personal respect and affection we may have for people makes us sad about the course of events, but we have to uphold a high ethical standard, and none of our personalities is more important than that," she said.

McConnell acknowledged that Democrats have a "lot of money" and won't "go down" without a fight.

McConnell's party also has had ethical problems of its own. Sen. John Ensign, R-Nev., is being investigated over whether he broke the law in trying to keep an affair secret. Sen. David Vitter, R-La., was tied to the D.C. madam prostitution ring. Indiana Republican Rep. Mark Souder left the House earlier in the year after admitting to an extramarital affair with an aide.

"I think it's important for members of Congress to have the highest possible ethical standards. And a number of members over the years have gotten in trouble," McConnell said when asked about those cases.

The Senate Republican leader described the campaign ahead as an effort to sustain the momentum he claimed his party already has.

"I'd love to have the election tomorrow, but obviously it's not tomorrow. ... I think one of the things we need to do is remember that there's still three months to go. If the election were today, we'd certainly have a good day, but it's a long way until November," he said. "They've outspent us for the last three cycles and I expect them to do it again."