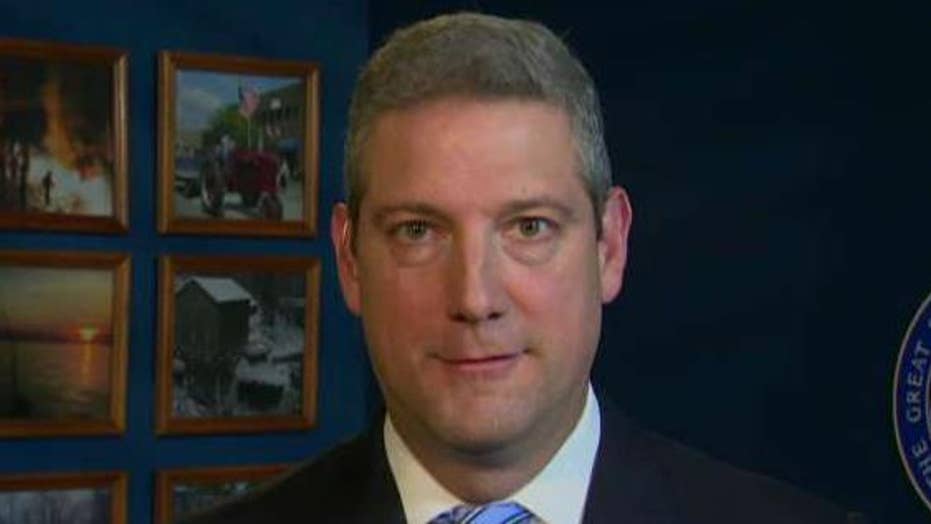 2020 Democratic presidential candidate Rep. Tim Ryan said his party should not be pushing Medicare for All.

Quite a few Democrats vying for their party's 2020 presidential nomination are latching onto Vermont Senator Bernie Sanders' Medicare for All plan, but at least one is pumping the brakes and pointing out the policy's flaws.

Rep. Tim Ryan, D-Ohio, said that while he is in favor of a "public option" for health care, adopting a plan that would eliminate people's existing private insurance is not the way to go.

DNC CHAIR PEREZ DEFENDS FREE HEALTHCARE FOR ILLEGAL IMMIGRANTS: 'THIS IS NOT A HANDOUT'

"I am not for taking private insurance away," Ryan said on Fox News' "Sunday Morning Futures," adding, "We cannot be a party that goes into a general election taking private health insurance away from union members in some of these states that negotiated pretty good health care plans for themselves." Ryan noted that unions may have "sacrificed wages during the negotiations to get a good health care plan."

Ryan claimed that Medicare for All would work in the future, but said the U.S. cannot jump straight to it from the existing private insurance system. He proposed that the "natural next step" would be a public option that people could choose to buy into, and then "some type of Medicare for All system at some point."

The Ohio congressman also discussed medical coverage for those in the U.S. illegally. During the second night of debates, all ten participants said that their government healthcare plans would cover illegal immigrants.

Ryan said that while he would grant these people "some basic care," he thinks covering them under Medicare is "a whole other conversation that we need to have."

Another issue where Ryan is more to the center than others in his party is how to address the ongoing crisis at the U.S.-Mexico border. While some Democrats like New York's Alexandria Ocasio-Cortez have called for abolishing U.S. Immigration and Customs Enforcement (ICE), Ryan said more resources are needed.

"No one's gonna secure the border better than I am," Ryan said. "I want to make sure we have enough personnel down there."

Ryan also pointed to what he believes is the real problem, which is that so many people feel the need to flee their home countries in the first place.

"Why are these people migrating to the United States? Because gangs are running Honduras and Guatemala and El Salvador," he said. "So a real president would say, 'Let's get to the root of the problem, let's fix it so these people can stay in their own homes in Central America.'"