Why Does Obama Want Us to Be Average? 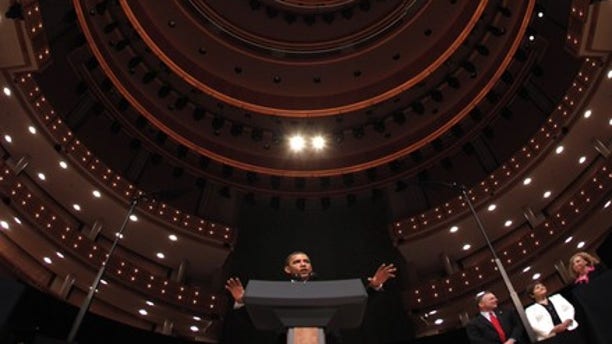 Every once in a while, President Obama says something that offers us a window into his soul. Wednesday was one of those days. With just a few words -- that went largely unnoticed -- we caught yet another glimpse into the mind of the man who rarely veers from his script, and chooses every word with exhausting deliberation.

At the close of the two-day nuclear security summit the president hosted this week in Washington, DC, Obama showcased his disdain for the American muscle that is our military:

“It is a vital national security interest of the United States to reduce these conflicts because whether we like it or not, we remain a dominant military superpower, and when conflicts break out, one way or another we get pulled into them," Obama said. "And that ends up costing us significantly in terms of both blood and treasure."

Damn right we are. What’s not to like? The United States military is one of our greatest national treasures. Our men and women in uniform have helped liberate, rescue, protect and save millions of people across the globe. When disaster strikes, the sight of the U.S. military in uniform has brought relief and ease to many. From storming the beaches of Normandy to resolving conflict in Yugoslavia to taking out a bunch of pirates holding an American ship hostage, we should be celebrating our superpower status. They’re heroes, after all.

It’s also a necessity to have military strength in the dangerous world in which we live. It keeps our enemies from wreaking havoc on our nation and gives citizens piece of mind. It’s called deterrence. -- Something the president is incapable of grasping.

And here's another newsflash for the president: our military is voluntary. Those serving want to defend the United States. It is their commitment that gives us the strength that makes Obama so uncomfortable. This comment was disrespectful to them, and to their families. As their commander in chief, he should know better.

But Obama’s been reared under a warped liberal dogma that believes America is a bully. That we’ve made many mistakes militarily and that we’re on the wrong side of history. It’s why he’s more than willing to apologize on foreign soil for these perceived errors. Hence, he seeks to exchange our might for a meek and meager approach. He aims to put us on equal footing with the rest of the world because in his mind, we’re no better. There is no such thing as American exceptionalism in the mind of Barrack Obama. Just average America.

Obama wants us to be uninvolved. His words mirror his actions when it comes to disarming our nuclear weapons capabilities and apology diplomacy. If President Obama had his way we’d bury our heads the sand, thus espousing his “mind your own business doctrine.” (I’d hate to have Obama by my side in a bar fight, that’s for sure). What he fails to understand is that the reason we have many of our allies is because of our involvement in helping them in a time of need. We’re a democracy, and we've chosen to get involved in some really tough fights. Everyone in Europe isn’t speaking German because of our involvement in one of them.

This little noticed comment from our president confirmed what many of us have known for a long time: President Obama is uneasy with America’s greatness. No other U.S. president since Carter has been this willing to diminish our assets and embrace passivity in quite this way. But I've got some news for the president: when it comes to our military, they are the best. Whether he likes it or not.