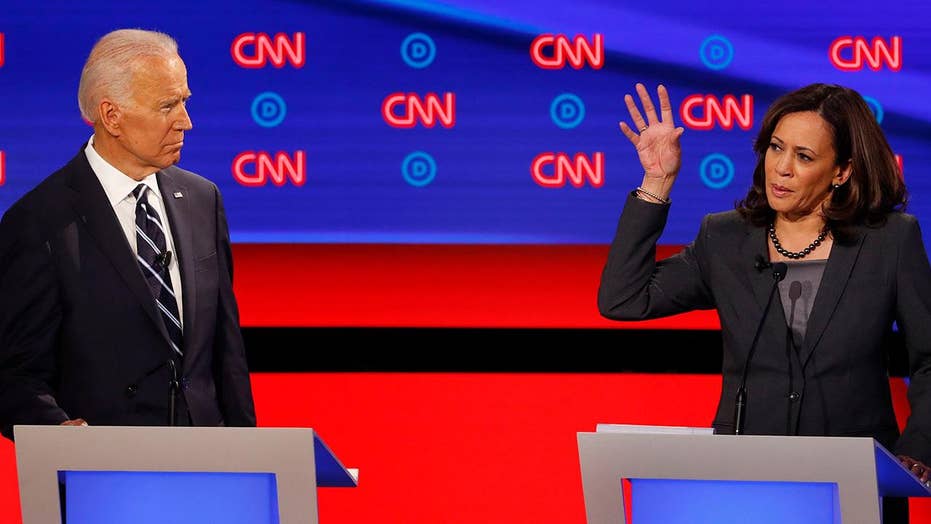 Former Vice President Joe Biden has bragged on two occasions that he would like to beat up President Trump.

In March 2018, Biden huffed: “They asked me would I like to debate this gentleman, and I said no. I said, ‘If we were in high school, I’d take him behind the gym and beat the hell out of him.”

Biden’s tough-guy braggadocio was apparently no slip. A year later, he doubled down on his physical threats.

Had former Vice President Dick Cheney ever dared to say something similar of President Obama, what would the media reaction have been?

Sen. Corey Booker, D-N.J., another presidential candidate, took up where Biden left off.

"Trump is a guy who you understand he hurts you, and my testosterone sometimes makes me want to feel like punching him, which would be bad for this elderly, out-of-shape man that he is if I did that. This physically weak specimen," Booker said.

One trait of the Democratic field of presidential candidates is always to sound further to the left than any of their primary rivals. Apparently, a similar habit is to see who can most effectively imagine beating up the president. For now, Booker seems to be in first place.

Actor Robert De Niro has repeatedly expressed a desire to physically assault Trump. A month before Trump was elected, De Niro said of him, “I’d like to punch him in the face.” Later, De Niro doubled down with a series of “F--- Trump” outbursts.

This is especially dangerous in the aftermath of progressive zealot and Bernie Sanders supporter James Hodgkinson’s 2017 attempt to assassinate Republican congressmen at a practice for a charity baseball game. Rep. Steve Scalise, R-La., was shot and nearly killed. Three other people were also shot and wounded.

Rep. Rashida Tlaib, D-Mich., just hours after she was sworn in, said a rally that she had promised her young son that “we’re going to impeach the motherf----r.”

Trump is a controversial president, no doubt. He replies to his critics with strong, often inflammatory invective.

Yet the continued litany of threats to physically assault or kill a president is lowering the bar of assassination, and it will haunt the country long after Trump is gone.

On the day Trump was inaugurated, the pop music star Madonna told a large crowd outside the White House that she had thought of blowing it up.

A few months later, comedian Kathy Griffin issued a video where she held up a bloody facsimile of a decapitated Trump head.

Since then, Hollywood and the entertainment industry have been in constant competition to imagine the most gruesome way of killing off Trump — stabbing, blowing up, burning, shooting, suffocating, decapitating or beating.

Celebrities such as Johnny Depp, Snoop Dogg, George Lopez, Moby, Rosie O’Donnell, Mickey Rourke and Larry Wilmore seem to relish the media attention as they discuss or demonstrate what they consider to be creative ways to kill the president.

It is hard to determine whether their tweets and outbursts are designed to restore sagging careers, are heartfelt expressions of pure hatred, or both.

We saw something similar to the current climate of threatened violence during the reelection campaign and second presidential term of George W. Bush.

A few columnists, documentary filmmakers and novelists went well beyond the boilerplate invective of calling Bush a fascist, racist, or Nazi and war criminal, and imagined his assassination in a variety of ways.

But we are now well beyond even that rhetorical violence.

Trump and his critics often go at it relentlessly in interviews, in Twitter wars, and on television and radio. No insult seems too petty for Trump to ignore.

Yet progressives like Biden and Booker seem to think that by bragging of wanting to do violence to the president, they will rev up their base and win attention, as if physical violence is justified by Trump’s unorthodox presidency.

Nonetheless, the current climate is becoming scary. Those who brag of wanting to violently attack the president should worry about where their boasts will finally lead if any of the thousands of James Hodgkinsons in America take such threats seriously and act upon them.