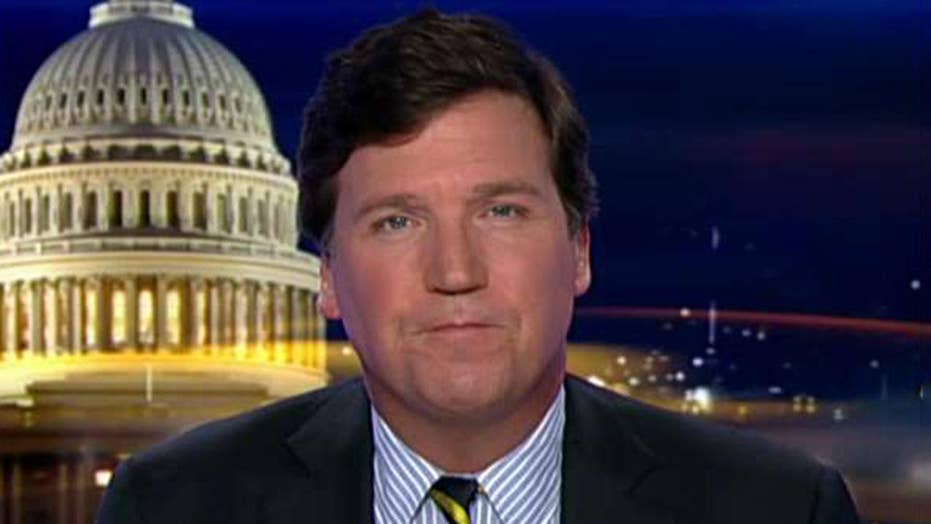 Tucker: Washington never tires of being shocked at what a 'bad man' Trump is

Most of Michael Cohen's testimony was dedicated to the question of President Trump's character.

There was a lot going on Capitol Hill on Wednesday. The circus came to town. President Trump's former lawyer, Michael Cohen, testified for most of the daylight hours, and everybody carried it. You probably heard snippets in the Uber on the way to work - you've got a real job. So, we watched every moment because we are paid to do that.

And most of the day was devoted to the question of Trump's personal character. Now, people in Washington never tire of being shocked by what an incredibly bad man Donald Trump is. They are incredibly good people, and they can just hardly believe his flaws. They sat open-mouthed in the Congress as Michael Cohen described his former boss as -- brace yourselves now -- a bit of a conman who has, at times, overstated his personal wealth.

In private, Trump apparently has said offensive things. At one point, Michael Cohen claims, Trump used a straw buyer to bid up a portrait of himself at a charity auction. He wanted his picture to go for the highest price.

Whoa. Are you shocked yet? Can you believe it? Of course, you can. This is exactly we knew back in 2015 when he descended the famous escalator, and yet millions of people voted for him anyway. His character was not the point.

The point of Wednesday's hearings was not his character, either. It was supposed to be Russian collusion and obstruction of justice. Those are the topics that have completely derailed the American government for the past two years. And on those subjects, we actually did learn quite a bit.

Here is one example. About a month ago, the cat blog, BuzzFeed, ran an article that claimed Trump had ordered Michael Cohen to lie to the Congress. That is a big deal. It is a crime. And so immediately, the hysterics in the Congress and on cable news went bonkers. Impeachment! Indictment! Life in prison!

But did that actually happen? Well, since Cohen was there, in person, he was able to conclusively answer that question during the hearing and he did.

He admitted that Trump never directed him to lie to Congress. So, it looks like Trump will not be going to jail for suborning perjury after all -- darn, foiled again! Look for a retraction in the latest edition of BuzzFeed. You'll find it just below the 15 cats that look like Ruth Bader Ginsburg listicle. Look carefully.

But what about Russian blackmail? You have been hearing about that for years. Trump, they have told you, again and again, has somehow been compromised by the Russians. And that is why he has been spying for them. Putin has something horrible and incriminating on Donald Trump -- he must. A picture of the president in a "Batman" costume maybe, or a videotape with hookers doing something weird.

Certainly, Michael Cohen would know about that kind of thing -- that is his world. Luckily, a sitting member of Congress asked Cohen about it directly.

"Are you aware of anything that the president has done at home or abroad that may have subjected him to or may subject him to extortion or blackmail?" Rep. Jamie Raskin, D-Md., asked

"I've heard about these tapes for a long time," Cohen said. " I've had many people contact me over the years. I have no reason to believe that that tape exists."

Keep in mind that Michael Cohen is Trump's personal lawyer of 10 years. He now hates Donald Trump and would like to destroy him ... If Michael Cohen had the dime, he would drop it. But he doesn't. There is nothing there. It was all a lie. Can we go home now?

Thanks, Mr. Raskin for clearing that up. So the "pee tape" is not real. There goes the juiciest part of the Trump dossier, which you will remember was yet another highly publicized scoop from, yes, BuzzFeed. Good time to get back to those cat videos, fellows.

But wait, what about the trip to Prague that Michael Cohen supposedly took that was part of his collusion with dark forces of the Russian empire? That was in the dossier as well. BuzzFeed told us about it. Surely Cohen would admit it now. He's heading to prison. He has got nothing to lose. Well, Cohen was asked about the Prague trip -- and he said he's never been to Prague, never been to the Czech Republic in his life.

This is where it gets confusing. Never been to Prague. This is the point at which what they call the "narrative" starts to break down a little bit. If Michael Cohen never went to Prague, as BuzzFeed and Adam Schiff and the entire primetime lineup of MSNBC, have told us repeatedly that he did, then how exactly did Michael Cohen collude with the Russians to steal the 2016 presidential election from its rightful winner, Hillary Clinton?

Well, that is a good question, isn't it? Rep. Debbie Wasserman-Schultz of Florida, as incisive an interviewer as the Democrats have, wondered that, too. "Based on what you know, would Mr. Trump or did he lie about colluding and coordinating with the Russians at any point during the campaign?" she asked.

Cohen responded with the following: "So as I stated in my testimony, I wouldn't use the word 'colluding.' Was there something odd about the back and forth praise with President Putin? Yes, but I'm not really sure that I can answer that question in terms of collusion."

Oh, wait, so there is no collusion. There is no Russian blackmail. There is no obstruction of justice. There are none of the things that our entire media class has spent the last two years huffing and speculating wildly about.

Keep in mind that Michael Cohen is Trump's personal lawyer of 10 years. He now hates Donald Trump and would like to destroy him. He has said that again and again. If Michael Cohen had the dime, he would drop it. But he doesn't. There is nothing there. It was all a lie. Can we go home now?

Nope, we have got two more days of stuff just like this. Two more days of exchanges where members of Congress will be able to prove that they are not only dumber than you thought they were, but they are a lot creepier. Exchanges where they ask things like, is there a love child? Is he a dope head? Did he pay for abortions?

Cohen replied no, no, and no on all accounts. By the end of the hearing, you start feeling kind of bad for Michael Cohen, honestly. He's not a genius. Anyone who knows him will affirm that. He is in his 50s now, and he is headed to prison -- and that is a long way from where he expected to be. Cohen showed up in Washington two years ago anticipating that he would be the kind of guy, the kind of mover and shaker, who would be welcome at any restaurant in town. Part the seas for Michael Cohen. Now, he is going to be eating sloppy joes off of a metal tray with a thousand other creeps in an identical polyester uniform in the lockup.

So, take the politics out of it for a minute, if you can. Let's be honest. This is a sad story. Michael Cohen is a broken and desperate man. But nobody cares. Democrats cheered for his conviction on ludicrous, absurd campaign finance charges, as if paying off somebody's girlfriend is a campaign finance violation. It is laughable, but they don't care.

Now, they are squeezing whatever use they can out of Michael Cohen as he shuffles off to his cell. What do the rest of us get out of this? We learn that Trump is vain and vulgar. Okay, what do we do with that information? Is it supposed to make us support open borders? Late-term abortion? The war in Syria? The Green New Deal? Will it make the drug epidemic go away? Will it make the suicide rate drop? Will it make housing affordable in the cities? What does that have to do with anything?

Well, it doesn't have anything to do with anything, and that is exactly the point of it. That is why this is going on forever. The more time they waste yelping about Trump's charity auction scam and his naughty language in private, the less time they have to explain why they have run this country into the ground and gotten rich doing it.

This is a distraction, and, we are falling for it, for the record.