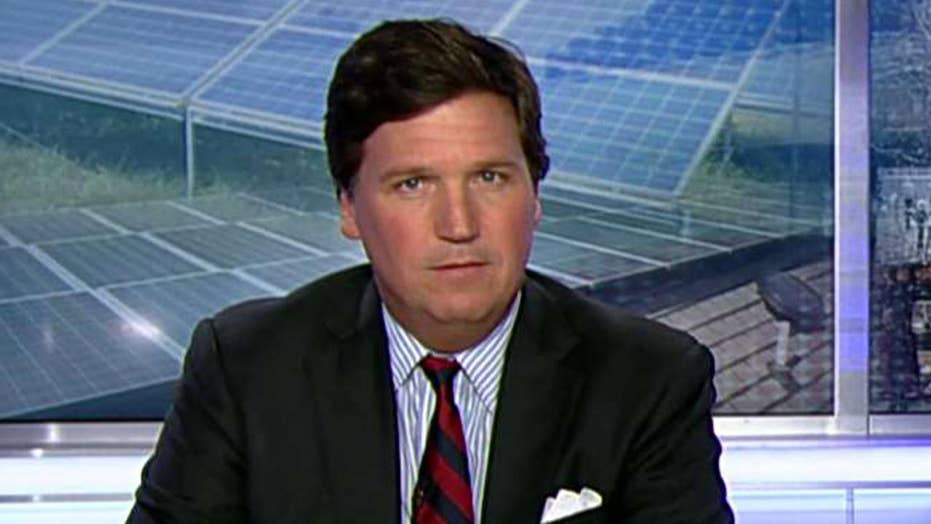 Tucker: Solar power is not a replacement for fossil fuels

We don't do a lot of weather segments on "Tucker Carlson Tonight," but we couldn't help but notice this phenomenon called a "polar vortex" that's descended on the Midwestern United States this week. Temperatures dropped to lows that didn't even seem real.

Parts of the state of Illinois fell to 38 degrees below zero Thursday morning; that's a new state record. In Thief River Falls, Minn., the temperature approached 80 below. Cold like that will turn hot coffee to ice crystals before it hits the ground. Stay outside for any length of time, and you will die -- and a number of people did in that region. They were found frozen to death in the last few days.

Meteorologists -- and this is the good news -- say it will warm up soon. Climate change will continue, as it always has. Spring will come. But this is a good reminder of something: Energy matters. It keeps us alive. What would happen if you didn't have energy?

Well, that's something we maybe need to consider very soon because of something called the "Green New Deal." What is that? It's not clear. Rep. Alexandria Ocasio-Cortez, D-N.Y., the chief proponent of the Green New Deal, described it this way in an interview with CNN's Anderson Cooper.

"You are talking about zero carbon emissions, no use of fossil fuels within 12 years?" Cooper asked.

"That is the goal. It's ambitious," Ocasio-Cortez said.

"How is that possible? You're talking about everybody having to drive an electric car?" he asked.

"It's going to require a lot of rapid change that we don't even conceive [of] as possible right now," she said.

So no fossil fuels within 12 years. There's a lot we don't know about this plan, but that would definitely be the headline. They've spelled it out very clearly.

Now, before we can assess whether getting to that point -- no fossil fuels in 12 years -- is even possible, it is, as the congresswoman just said, an ambitious goal. Let's consider what it would mean for the United States.

No fossil fuels would mean no coal, no oil, and no natural gas. And that would mean no cars and no airplanes. It would mean shutting down the single most vibrant part of the entire U.S. economy, which is the energy sector. It would mean putting at least six million Americans out of work immediately.

Solar is not a replacement for fossil fuels, now or any time soon, and anyone who tells you otherwise hasn't bothered to learn anything about it. That would be describe most of the people pushing the Green New Deal.

As of today, America is the largest oil producer in the world. The country exports more natural gas than any other place. More than 90 percent of all of our energy comes from fossil fuels and nuclear power. So we have to figure out a way to replace that in 12 years, using primarily solar and wind power. Ambitious? Well, that's one way to describe it. More destructive than a major war on U.S. soil would be another way to describe it.

Senator Kirsten Gillibrand calls the prospect of all of this "a really exciting thing." Kamala Harris agrees. Bernie Sanders isn't simply a fan; he says eliminating fossil fuels immediately is a moral imperative -- a "life and death issue."

What's so interesting about this is that the party of science somehow forgot to consult actual scientists about their plan. Talk to someone who studies energy and see for yourself. We are nowhere near being able to do any of this. Wind power is a scam. It's an elaborate ripoff perpetuated on impoverished rural America by a few heavily-subsidized corporations that are getting rich from making the landscape uglier. Solar is a promising technology, actually. But we're still far from being able to efficiently store the energy it produces -- and storage is key in a power grid.

Solar is not a replacement for fossil fuels, now or any time soon, and anyone who tells you otherwise hasn't bothered to learn anything about it. That would describe most of the people pushing the Green New Deal.

How well is wind power going to heat your house when it's 30 below? What is the range, exactly, on those new solar passenger jets? Well, they don't know and they don't care because none of it applies to them. It never does.