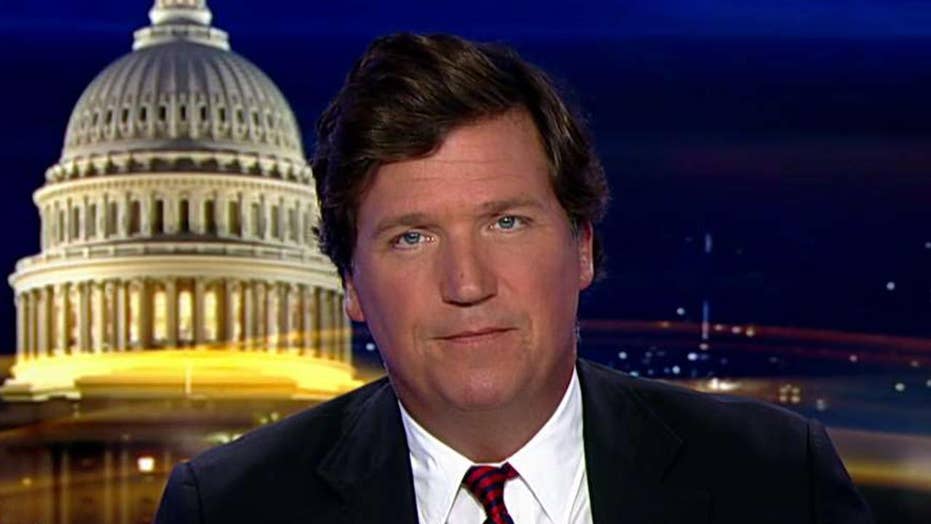 Tucker: What exactly is Joe Biden running on?

It's hard to imagine a presidential candidate more out of step with the moment.

It'd be funny to do a poll sometime and ask people who live in Washington, D.C. whether they have ever met Joe Biden personally. I bet a strikingly large percentage would say yes.

Biden has been in Washington forever. How long? Here's some perspective: Joe Biden first ran for president more than 30 years ago. It didn't go well, to put it mildly. At the time, Biden was caught stealing details from another man's biography, British politician Neil Kinnock's biography, and forced to drop out in a humiliating plagiarism scandal.

People who knew him, though, always thought Biden would try again for the presidency. And of course, he is, though this year seems a pretty strange time to do it.

As of right now, though, Biden is still the frontrunner for the Democratic nomination, but it's not a comfortable fit. So what exactly is Joe Biden running on? Well, if you guessed, ideas, have another beer -- you've obviously had a few beers already if you think that. No, Biden is not running on ideas; he is emphatically not an ideas man.

He is the most experienced candidate in the race, Biden often says. In fact, he is the only vice president in American history who served more than two full terms in office. And that's how he met the survivors of the Parkland shooting at the White House just last year -- last year. And the rest of us assumed that Mike Pence was the vice president, but no.

Biden told reporters the following recently: "I watched what happened and those kids in Parkland came up to see me when I was vice president. They want -- and I know that some of you covered it."

That's pretty impressive. You thought that Pence was the V.P. last year, but no. Biden was still the vice president, and none of us knew it.

But it turns out there are a lot of things you didn't know about Joe Biden. For example, Biden's conventional biography -- the one you can find on Wikipedia -- claims he went from a private high school to college and then right to law school. He graduated 76th in a class of 85 students. That's the Biden we thought we knew.

What we didn't know was that while becoming an attorney, Biden was also working deep underground -- literally underground -- as a coal miner, streaked face and headlamp included, and that's why he has coughed sometimes, still. All of these years later, mining just takes it out of a man.

"People may vote against me, but I am a hard coal miner, anthracite coal -- Scranton, Pennsylvania," he explained in 2008. "Okay, that's where I was born and raised. And it's nice to be back in coal country.."

Yes, he is a coal miner. It's true. You should also know that Biden was also, at various times, a fireman, a hard-boiled homicide detective, a gold miner in the Yukon, and a wise old Indian chief who slew many a bear in his day. Not your average politician for sure.

Needless to say, Biden was also a war hero. Of course, he was not in his generation's war; deference kept Joe Biden out of Vietnam. No, he was the oldest American soldier/U.S. senator serving in Iraq, braving relentless enemy fire to bring democracy to that benighted nation.

"Number one, you take all the truths out, you better have helicopters ready to take those 3,000 civilians inside the Green Zone where I've been seven times and shot at," Biden told supporters in 2008.

Yes, he has been shot at. Others, we should tell you, remember that moment differently. They claimed Biden was simply staying at a hotel in Iraq when a mortar exploded hundreds of yards away. The mortar didn't even delay the breakfast buffet, but whatever.

To Joe Biden, it was yet another death-defying moment in a long life as the world's most interesting senator. In 2007, he claimed he nearly got killed by the Taliban.

It's hard, in fact, to imagine a candidate more out of step with the moment he is running. Biden is old and pale at a time when his party worships youth and diversity.

Now, once again, we must tell you there was some dispute about what actually happened. Oher possibly more factually-reliable participants claim that Biden's helicopter landed because of a snowstorm, not because Usama bin Laden was personally trying to murder Biden.

But don't tell Senator Biden that. Nor should you tell him that nobody can remember seeing him at all those civil rights sit-ins and demonstrations he claims to have led in the 1960s, either. He and Martin Luther King, leaders of the movement -- that's his story.

He has got a million stories like that, and he is the hero of every single one of them. Take a seat, and he'll tell you, ladies and gentlemen.

And remember, as you listen, that this man -- this former coal miner and civil rights leader -- is the single sanest person running for president as a Democrat this year. Meditate on that for a minute.