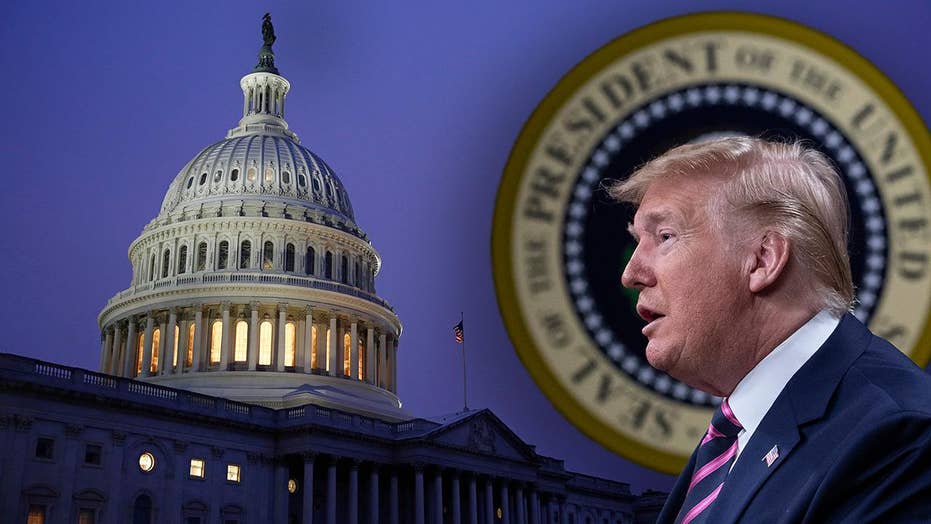 Next steps in impeachment process

The vote by the House Judiciary Committee Friday to adopt two articles of impeachment against President Trump makes it clear that Democrats are moving full speed ahead on the road to impeachment – regardless of the merits of their accusations or the integrity of their process.

But speeding down this road looks like it will be dangerous for the Democrats, who face the strong possibility that the trip will end in a crash and leave the party with serious injuries that will cause it to lose majority control of the House in the 2020 elections.

House Democratic leaders are so determined to strike out at President Trump that they seem to be operating on the notion that “desperate times call for desperate measures.”

“The next election is at risk,” said House Judiciary Committee Chairman Jerrold Nadler, D-N.Y., when unveiling the committee’s two articles of impeachment earlier this week. “We must act now.”

The full House, with a big Democratic majority, is expected to follow the lead of the Judiciary Committee next week and also adopt the articles of impeachment.

But don’t look for President Trump to start packing his bags. The House vote simply sends the articles of impeachment to the Senate.

Here is what we know based on the Constitution and Senate procedure.

The Constitution has two short paragraphs regarding the Senate and impeachment. Article 1, Section 3, Clause 6 states that the “Senate shall have the sole Power to try all Impeachments.”  Further, it provides that when sitting for an impeachment trial, senators “shall be on Oath or Affirmation.” That means that they are sworn to tell the truth and are supposed to rule in accordance with the law and the evidence presented.

Impeachment can be used to remove various federal civil officers, including judges. The Senate has used a committee to try the impeachments of lesser officers (and then referred the record to the full Senate, along with the committee’s recommendation). But when it is the president, the trial is held by the full Senate and “the Chief Justice shall preside.”

Democrats and allied independents hold 47 Senate seats. So even if every Democrat votes to remove Trump from office – and that’s not a certainty – 20 Republicans would have to also vote to remove Trump if 100 senators vote in the trial.

What are the chances of the Senate convicting Trump?

"The case is so darn weak coming over from the House. We all know how it's going to end," McConnell said. “There is no chance the president is going to be removed from office."

"My goal is to end this as soon as possible for the good of the country because I think it's a danger to the presidency to legitimize this," Graham said on “America’s Newsroom.”

So while the chance of the Senate convicting Trump and throwing him out of office are slim to none, it’s worth noting that Article I (Sec. 3, Clause 7) of the Constitution gives the Senate two powers. One is to convict a federal official and remove him from office. The other is to bar that official from ever holding a future office in the federal government.

Democrats and allied independents hold 47 Senate seats. So even if every Democrat votes to remove Trump from office – and that’s not a certainty – 20 Republicans would have to also vote to remove Trump if 100 senators vote in the trial.

Even if the Senate were to remove Trump, he could still run for election in 2020 unless the Senate also voted specifically to bar him from doing so. Former federal Judge Alcee Hastings, a nominee of President Jimmy Carter, was impeached by the Democratic-controlled House in 1988 for perjury and bribery.

Hastings was convicted in the Senate in 1989 and removed from office. But because the Senate did not bar him from holding future federal offices, Hastings ran for a seat in the House as a Democrat in 1992 and has been there ever since.

In the only two presidential impeachment trials ever held in the Senate, both presidents – Andrew Johnson and Bill Clinton – were acquitted.

For Johnson’s trial in 1868, the Senate adopted specific rules to govern the proceedings.

According to the current “Rules of Procedure and Practice in the Senate When Sitting on Impeachment Trials” (as revised in 1986), the Senate must start the trial by 1 p.m. on the day (Sunday excepted) following the day that the House sends its impeachment “managers” to the Senate to present the articles of impeachment.

The last impeachment trial – of former federal Judge G. Thomas Porteous Jr. – that was held in the Senate was in 2010. The Democratic manager of the case was Rep. Adam Schiff, now a leader in the drive to impeach President Trump. The Republican manager was former Rep. Bob Goodlatte of Virginia. For the Clinton impeachment trial, the House appointed 13 managers.

Under the 1986 Rules, the Senate shall “continue in session from day to day (Sundays excepted) after the trial shall commence (unless otherwise ordered by the Senate) until final judgment shall be rendered.”

All other “legislative and executive business” before the Senate is suspended during the conduct of the trial. The rules specify that the “Chief Justice shall be” sworn in “by the Presiding Officer of the Senate and shall preside over the Senate during” the trial.

All motions, objections, and requests go to the presiding officer, who is given the power to “rule on all questions of evidence including, but not limited to, questions of relevancy, materiality, and redundancy.” Those rulings can be overturned only if a senator objects and asks for a formal vote by the entire Senate – and no debate is allowed.

There is no requirement that the president appear for the trial; his lawyers can appear on his behalf (which is what happened with Bill Clinton). The president is not limited to using a senator as his trial counsel but can choose his own lawyers to defend him.

In Judge Porteous’ impeachment trial, his lawyer was Professor Jonathan Turley, one of the expert witnesses who testified in the House Judiciary Committee’s hearing last week, called by Republicans.

The rules provide that witnesses shall be questioned by “one person on behalf of the party producing them, and then cross-examined by one person on the other side.” Any senator called as a witness must be sworn in.

If a senator wants to ask a question of a witness, a House manager, or the defense counsel, the question must be put in writing and given to the presiding officer, who will then present the question.

The House managers and the defense lawyers can object to witnesses answering questions from senators, and both sides can argue “the merits of any such objection.” As previously noted, the presiding officer will determine the merits of the objection, unless overruled by a vote of the Senate.

Since the Democrats’ proposed impeachment resolution has only two charges, there would be two votes. If neither article of impeachment is approved by the requisite two-thirds vote of the senators present, then “a judgment of acquittal shall be entered.” Under the rules, no senator is allowed to file a motion to reconsider the vote.

Bill Clinton’s trial started on Jan. 7, 1998, and the Senate recessed several times during the trial.

Closing arguments took three hours from each side, and when a vote was held on Feb. 12, Clinton was acquitted.

So there we have it. What we still don’t know in this case is: who the lawyers and House managers will be; the number and identity of witnesses, if any, to be called and whether their testimony will be live or through depositions; and how long the trial will last.

If the Clinton impeachment trial is a guide, it would be surprising if this trial took more than a month. Graham told Fox News he was looking for a shorter time, closer to a week.

We’ll all find out soon.