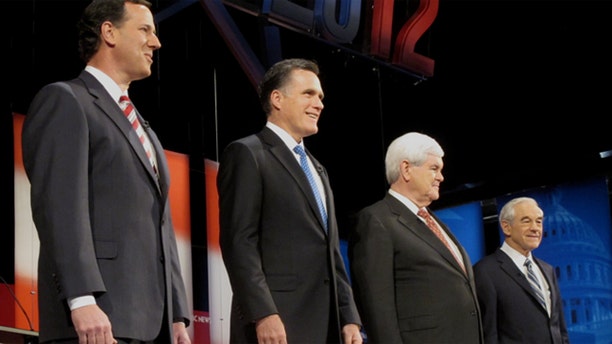 As Rick Santorum gets off his horse and the general election race between President Obama and Mitt Romney begins, let’s stop the political merry-go-round and write a first draft of the history of the 2012 GOP primaries.

Historians are certainly going to ask how a Republican Party that won big in the 2010 mid-term elections became so self-destructive? How could the party’s nominee start out running behind a very vulnerable incumbent?

How could it be that in March a clear majority of registered voters, 52 percent, told Fox News they now have an unfavorable opinion of the GOP. Thirty-nine percent had a favorable view.

Democrats hold a nine-point advantage over the GOP with a 48 percent favorable rating.

The GOP’s troubled brand is all the more puzzling when you consider that 40 percent of Americans, a plurality, tell Gallup they hold conservative views.

The history of these primaries really begins twelve years ago when George W. Bush first ran for president on the theme of "compassionate conservatism." This notion allowed Bush to separate and contrast himself with the negative image of the GOP during the 1990s.During that decade, congressional Republicans proposed significant cuts to federal entitlement programs like Welfare, Medicare and Medicaid. These proposals made it easy for Bill Clinton and the Democrats to move to the political center. They cast then Speaker of the House Newt Gingrich and Senate Majority Leader Bob Dole as callous, hostile to the poor and the elderly.

Bush’s compassionate conservatism in the 2000 campaign was a largely successful attempt to repair his party’s tarnished brand.

But the policies of eight years of the Bush administration -- an expanded federal government, record-breaking deficits, costly wars, and financial crisis -- reversed those gains and left the party’s image once again in shambles. Bush left office with a 22 percent approval rating according to the last CBS/New York Times poll of his presidency.

In the 2012 primaries none of the candidates for the GOP nomination called themselves “Bush Republicans.” Lots of them attached Ronald Reagan to their candidacy. But not one of them claimed to stand for the Bush administration’s policies -- with the exception of the “Bush Tax Cut.” And just this week the former president said he wished the tax cuts he championed were not named for him because with another name they might have a better chance to survive.

In the aftermath of the Bush presidency the party became fragmented, with the remnants of the Bush GOP establishment fighting for control of the brand against far-right social and religious conservatives.

As Wall Street Journal columnist Peggy Noonan wrote in 2008: “George W. Bush destroyed the Republican Party, by which I mean he sundered it, broke its constituent pieces apart and set them against each other.”

After its defeat in the 2008 election, the GOP needed a dynamic new leader to head the opposition to the Democratic Party in the age of Obama. The stage was set for someone bigger than a ranting radio talk show host or former politicians selling books and speeches while angling to host a TV program.

The only new face to rise up was the face of grassroots Republican defiance of President Obama and particularly the health care law. It was called the Tea Party.

The various organizations operating under the Tea Party banner are notable for the absence of any one leader. And they never won the support of most Americans. To the contrary, the fury central to the Tea Party was its distaste for President Obama, its opposition to big government, the debt and, most of all, nationalized healthcare. Signs mocking the president as a socialist, a racist joke by a Tea Party official, and rallies organized by right-wing radio talk show hosts made it a controversial, polarizing movement always in danger of running off the rails.

With the help of Tea Party activists, the GOP captured governorships and state legislatures across the country in 2010. But efforts by some Republican governors to limit collective bargaining rights for union workers led to a strong backlash.

Wisconsin Gov. Scott Walker could become only the third governor to be recalled. Last month, Wisconsin residents voted to put a measure to recall Walker and his lieutenant governor on the ballot this May.

Last November, voters in Ohio dealt a humiliating defeat to Republican Gov.  John Kasich by voting down his union-stripping law. Quinnipiac has his most recent disapproval rating, 46 percent, outpacing his approval, 40 percent.

And recent polling by PPP, a liberal polling group, on another Tea Party favorite, Florida Gov. Rick Scott, has his approval ratings at an all-time a low, 26 percent.

All of that local static and divisions among Republicans have been reflected in the primaries. Even this month polls showed Republicans still looking for other candidates to get in the race. And voter turnout has been surprisingly low for a party that bragged after 2010 that Tea Party excitement left the Democrats with an “enthusiasm gap.”

Meanwhile, the candidates have taken far-right positions on everything from contraception to immigration. That pandering to Tea Party positions has alienated independent women and Hispanic voters, both critical to the party’s future.

Mitt Romney is now the face of a party that is still factionalized and unsure of its own political identity as well as its feelings about him. But he has the money and the support of the Republican establishment, including Bush-era players in the Super PACs and the party. They think his business background and moderate history make him the candidate with the best chance to win in November.

Now the GOP primary season is over. Its history is the preface to the first chapter of the general election. If Romney is to have any chance of a happy ending he will have to reunite, rebuild and re-brand a damaged GOP.

Juan Williams is a writer, author and Fox News political analyst. His latest book, "Muzzled: The Assault On Honest Debate" (Crown/Random House), was released in 2011.