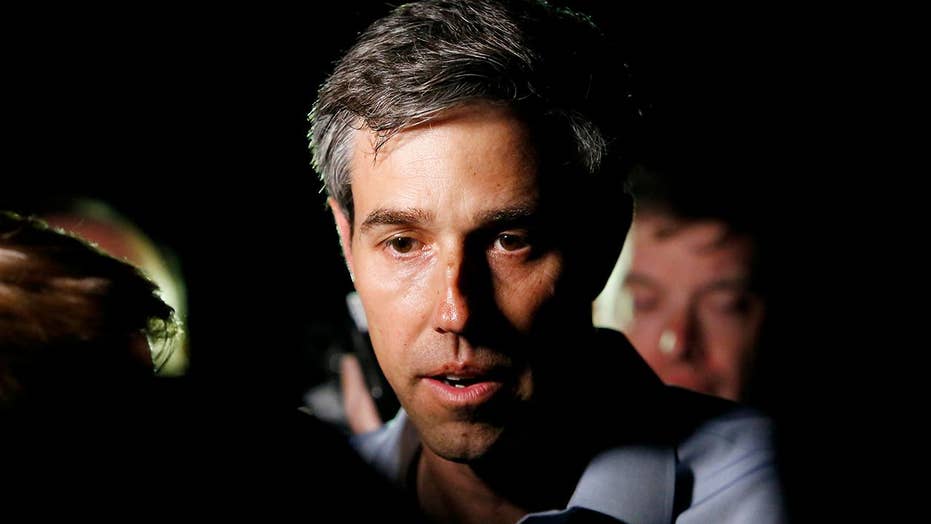 Launching his presidential campaign in Vanity Fair magazine last week, Robert "Beto" O'Rourke explained his message this way: "Every word was pulled out of me. Like, by some greater force, which was just the people there. Everything that I said, I was, like, watching myself, being like, 'How am I saying this stuff? Where is this coming from?'"

Where's it coming from Beto? Let me put it this way: Never in American politics has there been a more appropriate launchpad for a presidential bid than your profile in Vanity Fair. And as a public service, we'll explain to America just how vain you are, why you have so little to be vain about and why that's dangerous for America.

Earlier this year, Beto released a digital ad attacking President Trump on immigration. "It's not about people coming across the border," he said. "It's about visa overstays."

OK, asked a reporter from the Washington Post. So what should be done about visa overstays? Beto literally answered, "I don't know." Last week, when asked about his health care policy, his answer was basically, I don't know.

When asked about taxes --  I don't know.

But here's one thing Beto does know: Borders are not cool and must be taken down, man. Yeah ... take it down. And hey, let's take big money out of politics, too.

"Working for the clampdown"? Oh my God ... quoting the Clash in a debate! He is trying so hard. But whatever. Look, it doesn't matter, because Beto is always working for the people. People like his wife Amy's father, billonaire property developer Bill Sanders.

So this is the cool new politics the Democrats are swooning over? A spoiled rich kid who wanted to run for daddy's office, who used daddy-in-law's money to get elected and then used his office to screw the poor and serve the rich - his own rich family? Good ol' Beto, born with a silver skateboard at his feet.

After his father-in-law helped launch Beto's political career on the El Paso City Council, Beto repaid the favor by campaigning aggressively for a new property development in the city. It would involve seizing land from low-income Mexican-Americans so his billionaire father-in-law could build a superstore.

Beto's mother benefited from her son's political power, too. She was a shareholder in a web and software company he started after college. Beto's wife also joined the company in 2005 and ran it from the time he went to Congress in 2013 until she sold it in 2017. That would be fine, except Beto's political campaigns for the House and Senate have paid his own company more than $125,000  since 2011.

So this is the cool new politics the Democrats are swooning over? A spoiled rich kid who wanted to run for daddy's office, who used daddy-in-law's money to get elected and then used his office to screw the poor and serve the rich -- his own rich family? Good ol' Beto, born with a silver skateboard at his feet.

And the shameless hypocrisy continues. In his Senate campaign, Beto signed a "no fossil fuel money pledge" promising to reject campaign donations of more than $200 from fossil fuel companies and executives. But unbelievably, in the 2018 election cycle, Beto had the second highest total of donations from the oil and gas industry in all of Congress, including dozens directly from oil and gas executives.

And it gets worse. Pay close attention -- the details you're about to hear have never been reported before.

In Congress, Beto served on the Armed Services Committee, and despite his bold denunciation of special interest corruption, it turns out he's up to his neck in it, with over $100,000 in donations from the defense industry between 2016 and 2018.

About $23,000 of that came from Lockheed Martin, one of the government's biggest defense contractors, as well as $19,000 from Raytheon, another enormous defense contractor. But a closer look reveals a number of even shadier conflict donors on top of that.

For example, Beto took $2,000 from Robert Marcus, a lobbyist for Signal Group assigned specifically to represent Arktis Detection Systems, a company that sells radiation detection technology and specifically markets itself for Homeland Security efforts on its website

Beto also took $1,000 from Christian Kierig, a lobbyist from Kadesh and Associates whose personal clients included Northrop Grumman, another massive defense contractor. And then another $1,000 from another defense lobbyist, Michael Smith from Cornerstone Government Affarirs, who represents Boeing.

And on and on it goes. Conflict donors coming out of those innocent wide eyes, and yet Beto rails against special interests and money in politics. What a snake!

But in the end, none of that - the corruption, the nepotism, the hypocrisy -- none of that is dangerous. It's just like most politicians. There's a very specific reason I think Beto is dangerous, and I want to explain it to you clearly.

Take it from me as someone who has worked at the highest levels of government and politics. The most important thing about a candidate is not their promises -- those hardly ever get delivered anyway. It's about how they would respond to unpredictable future events. And that's about their character.

Whatever else people knew about Donald Trump going into 2016, it was obvious he was strong. He said what he thought, no matter who it offended.

But Beto O'Rourke says whatever people want to hear. In his Senate campaign, he wanted the people of Texas to think he only cared about them, not higher office. He insisted he didn't want to run for president and put his family through more stress. What a modern guy! Putting his family first ... until his next career move, just a couple of months later, when he announces, with wife Amy at his side, that he's running for president.

This guy cannot be trusted. He tells people whatever they want to hear. He is transparently desperate to be liked, to be loved. His campaign song might as well be the Stone Roses' "I Wanna Be Adored."

That's why he's dangerous. He's like a tree without roots; it cannot withstand the slightest pressure. Imagine him with Chinese President Xi Jinping. Beto wouldn't stand up to China. He would want Xi Jinping to like him. He'd just tell him what he wants to hear.

But before you dismiss Beto O'Rourke as a ludicrous joke, remember he is deadly serious about this. He's just told us his favorite book is "The Hero's Journey." He truly thinks of himself as a hero, sent to save America. Look what he said in his Vanity Fair interview: "You can probably tell that I want to run. I do. I think I'd be good at it... Man, I'm just born to be in it."

Wow. This is not a joke. This is a real danger for America.

And before the left starts screaming that this is some kind of Fox News hit piece on President Trump's potential opponents, let me remind you I have consistently praised Democratic presidential candidates, including literally last week, Elizabeth Warren. She at least is a serious person with a track record of fighting for working families.

Bernie Sanders is a serious person with a lifetime of consistent campaigning on principle. You may disagree with him, but he's obviously sincere. Kamala Harris is a serious person who as California attorney general tried to tackle tough social problems in a way that most conservatives would support. Even Cory Booker -- I know, I know, "Spartacus" ... he's got convictions, too. I believe him when he says he wants to bring the country together. He's got a track record. As mayor of Newark, N.J., he backed school choice. He is a serious person.

But Beto -- ridiculous, phony show pony Beto -- he is not a serious person. He is a vain, narcissistic weirdo. His track record is nepotism and corruption. His principles are me, me. and me again. He must never be allowed anywhere near the White House.

Adapted from Steve Hilton's monologue from "The Next Revolution" on March 17, 2019.