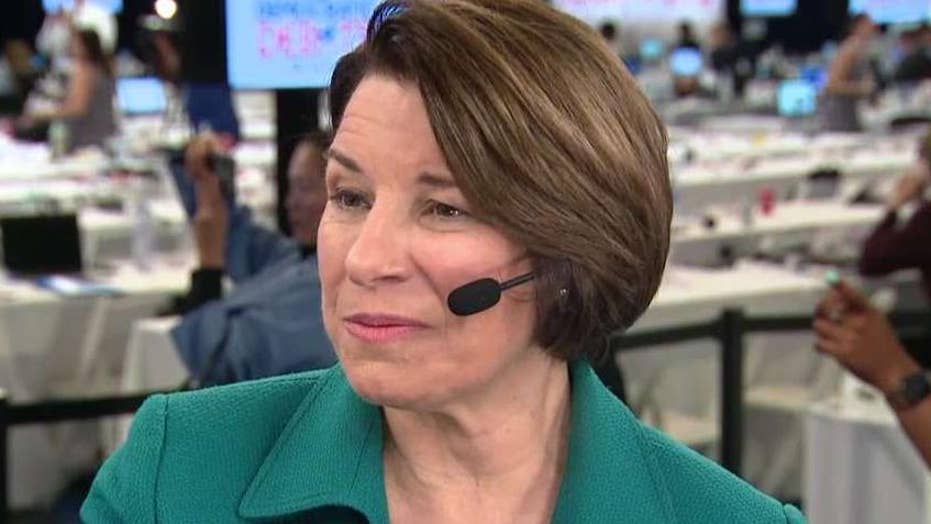 Klobuchar: I want to be the president for all of America

The 10 Democratic presidential contenders debating Thursday night made condescending efforts to win black votes, with former Rep. Beto O’Rourke of Texas saying he would support reparations for descendants of slaves, and other candidates acting as if the only issues of concern to African-Americans are racism and criminal justice reform.

As a black American who proudly served in the U.S. Army and graduated from college, I know that members of my community are hardworking and ambitious – just like Americans of other races and ethnicities. But the Democratic candidates seemed unable to see black Americans as anything other than perpetual victims who need to be rescued.

Not surprisingly, the candidates vying to challenge President Trump in the 2020 election demonized him every chance they got. They ignored the fact that the president has signed into law the most comprehensive criminal justice reform bill in a generation – a long-sought goal in the black community.

Former Vice President Joe Biden tried to one-up the president on the issue of cutting the prison population. "Nobody should be in jail for a non-violent crime," Biden said in a surprising line. "When we were in the White House, we released 36,000 people from the federal prison system."

Sen. Cory Booker of New Jersey pledged to create a White House office to battle white supremacy – yet another example of how the Democrats are wedded to the idea of making government bigger and bigger, raising taxes higher and higher, and spending more and more tax dollars as a way of solving every problem.

In contrast, President Trump understands the value of letting us all keep more of our own money to take care of our families and build better lives. He understands that the more money we’re forced to turn over to Uncle Sam, the more dependent we all become on the government programs that the Democrats are always seeking to expand.

Black voters – like all voters – want and deserve independence, not dependence on government.

On the economic front, the Democratic would-be presidents ignored the record low unemployment rate black Americans are enjoying in America’s booming economy, which is thriving thanks to the tax cuts and abolition of unneeded regulations by the Trump administration.

The strong, vibrant economy President Trump has created is good for all Americans – and is a dramatic contrast to the failed Big Government, high-tax policies the Democrats trotted out.

Black voters – like all voters – want and deserve independence, not dependence on government.

And while history has proven beyond doubt that the socialist policies embraced by Sen. Bernie Sanders and some of the other far-left candidates (though they deny they are socialists) have proven to be an abysmal failure around the world, the Democrats nevertheless held firm to their almost religious faith that government – rather than individual initiative – can solve all our problems.

Right off the bat, Sen. Amy Klobuchar of Minnesota made a strong impression as a centrist candidate who was not on the far-far left fringe of the Democratic Party that Bernie Sanders and Sen. Elizabeth (“I have a plan”) Warren occupy.

During the health care portion of the debate, Kobuchar’s “he wrote it, but I read it” critique of Sanders and his pie-in-the-sky absurdly expensive “Medicare-for-all” legislation was a masterful moment.

Klobuchar spent most of the night drawing a strong distinction between her and the others on the stage and establishing herself as a serious alternative for voters who just aren’t gelling with the radical left extremist wing of the Democratic Party.

Former Housing and Urban Development Secretary Joaquin Castro wasn’t afraid to hit below the belt, mounting a devastating critique of former Vice President Joe Biden. At one point, Castro asked Biden: “Are you forgetting what you said two minutes ago?” That was a clear shot at the 76-year-old Biden on the age issue.

If that wasn’t enough, Castro claimed he was “fulfilling the legacy of Barack Obama” more than Biden, embracing the nation’s only black president, who remains popular with most black voters. Biden has staked his claim for black support on his close working relationship with Obama when he served as Obama’s vice president for eight years.

It was disappointing that handouts and fear were all the Democrats could offer to black voters – and other voters as well.

Here’s the question facing all voters in November 2020 – whoever the Democrats will nominate: Do we want a president who gives us the freedom to achieve the American Dream – as President Trump is doing so successfully – or do we want a bloated government bureaucracy to take a giant chunk of our paychecks and then “take care” of us in a patronizing, inefficient and ineffective way.

Thankfully, the racist and discriminatory policies that held down black Americans for hundreds of years are long gone. We can – and are – succeeding under the policies spearheaded by President Trump, who despite false Democratic attacks is proving to be the leader best able to deliver for Americans of all colors.