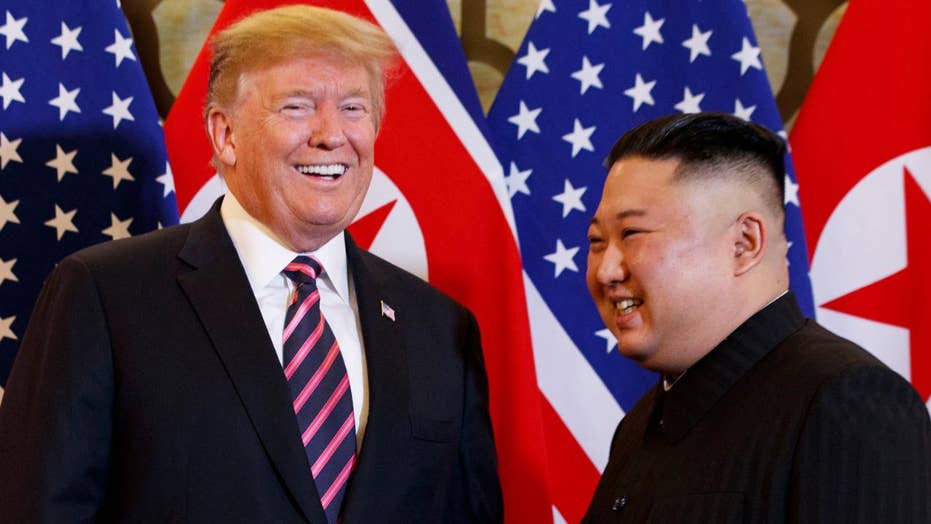 “I never expected to see you in this place,” North Korean leader Kim Jong Un said to President Trump as they met Sunday at the Demilitarized Zone on the border between North and South Korea.

Were you surprised, too? Wondering what to make of Trump briefly setting foot in North Korea by taking a few steps across the border? Historic, yes, but it’s not like Kim turned over the keys to his nuclear weapons storage areas and blew up his facilities capable of making new nuclear bombs.

Trump wants the 70 years of war and hostility between the U.S. and North Korea to end. The takeaway from the DMZ visit is that U.S. Special Envoy Stephen Biegun will resume working-level talks with the North Koreans.

Don’t let the drama fool you. Trump’s North Korea policy has three parts, and he’s pushing all of them.

First is getting rid of North Korea’s nukes, of course.

Next is reaching a permanent peace treaty to officially end the Korean War, which was halted with an armistice in 1953. That’s a high priority for South Korea and North Korea. It requires approval by China as well.

Third is to transform U.S. relations with North Korea. And that’s where Trump made the biggest gain Sunday.

At the DMZ, the world saw that Trump has made progress in changing the relationship with Kim and North Korea.

No, the Trump-Kim meeting was not just a Twitter impulse by President Trump. There’s been a spike in official and unofficial contacts between the U.S. and North Korea since mid-June.

The letters between Kim and Trump that the American president has talked about to the media were a huge hint. So was Trump’s two-day stopover in South Korea, following the G20 summit in Japan.

Notice also the signs of a quiet assist from President Xi Jinping of China. Xi met with Trump and Japan and visited North Korea just 10 days ago, where he met with Kim.

China wants North Korea to behave. China does not want a U.S.-North Korean military confrontation that could spark a refugee crisis sending large numbers of desperate North Koreans into China,

Nor does China like the firm military pressure that American forces and allies in the region keep in place on North Korea, even though China has stuck with U.N. resolutions on North Korea.

It’s no coincidence that both the U.S.-China trade talks and the U.S.-North Korea talks are moving forward right now.

Getting North Korea to make progress on denuclearization won’t be easy. The roadmap ahead starts with resuming working-level negotiations.

Kim agreed last fall to dismantle North Korea’s plutonium reprocessing and uranium enrichment facilities. All of them. Not just the main one at Yongbyon, but the web of additional sites. However, disagreements over how to get started derailed talks in Hanoi in February.

Mind you, there’s a lot to do. North Korea has to cough up a list of its nuclear facilities – a “comprehensive declaration,” to use Biegun’s term.

Then comes an agreement on inspection access and monitoring. The final step is removing and destroying all North Korean stockpiles of fissile material, weapons and, missile launchers.

In Ukraine, in the early 1990s, this took four years – and Ukraine is a democracy.

Meanwhile, the U.S. is safer. At the DMZ, the world saw that Trump has made progress in changing the relationship with Kim and North Korea. Trump showed up, Kim showed up, and the security details coped. South Korea’s President Moon Jae-in visibly encouraged them. This was unimaginable two years ago.

Then there is this military fact. The best thing about Trump’s policy so far is that North Korea has not conducted intercontinental missile tests since November 28, 2017.

The moratorium achieved by Trump is huge. North Korea conducted 94 missile tests from 2012 through 2017. But that wasn’t enough to complete the intercontinental missile test program.

Fortunately, North Korea has not yet demonstrated that is has developed a nuclear-armed missile that can reach the United States.

The vice chairman of the Joint Chiefs of Staff, Air Force Gen. Paul Selva, said June 20. “I’ve seen no indication that they’ve improved the arming, firing and fusing equation” of a nuclear warhead that would allow it to detonate “or the actual” re-entry vehicle.

U.S. missile defenses in Alaska and California are set up to shoot down small numbers of “rogue” missiles. But we are much better off if those missiles are never launched. The fact that North Korea hasn’t perfected such long-range missiles makes America safer.

The short-range missile tests by North Korea in early May don’t count. Those missiles can’t reach the U.S.

If the test halt of long-range North Korean missiles is all President Trump achieves, his effort will be worth it. But after the DMZ visit, there is tangible hope for more. As Trump said to his special envoy: “Good luck, Steve.”