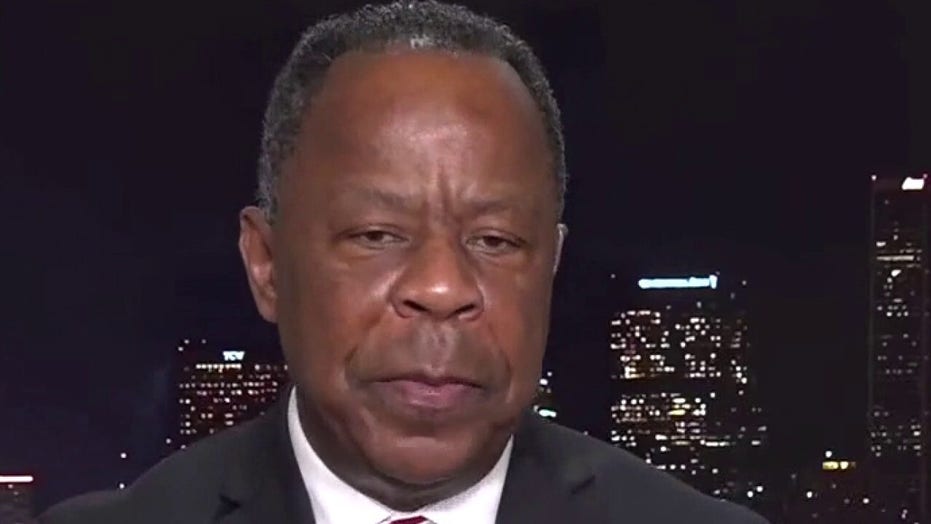 LeBron James won't sit with cop for a talk because it would 'destroy' the NBA star's narrative: Terrell

Civil Rights Attorney Leo Terrell reacts to a cop who requested a meeting with LeBron James to talk about policing.

Screaming, crying, yells of thanking God were all heard all over the world last Tuesday after a jury found former Minneapolis Police Officer Derek Chauvin guilty on all counts in the death of George Floyd.

I, too, felt at peace hearing the verdict, and posted a message on Instagram: "THANK GOD! Justice in the Derek Chauvin case was served. GUILTY ON ALL CHARGES."

Even though I’m pro-police and a Black conservative who understands the overwhelming majority of police officers do their jobs honorably, I also know police must be held to account when they violate their oath and figured most conservatives feel the same way.

Never once did I think this would be a controversial take on what happened. And yet, in a flash, I lost hundreds of social media followers and received a torrent of shocking comments, such as "George Floyd killed himself," "my respect for you just evaporated," and "if Floyd wasn’t a lifelong criminal this wouldn’t have happened." I was so floored by this reaction that I went on Fox News to sound off on these responses.

VICTOR DAVIS HANSON: A NATION'S WELL-BEING HINGES ON ONLY A FEW FACTORS – IS US TEETERING ON THE EDGE OF RUIN?

When George Floyd was killed, there wasn’t a single person I knew who said he deserved to die. But now, I was shocked to discover that some conservatives vehemently disagree with the outcome of the trial.

Part of this backlash stems from the progressive push to defund or even abolish the police in the wake of the Floyd tragedy. Polls show that all Americans — including Black Americans — overwhelmingly support policing in their neighborhoods, and 20 percent of Blacks actually want to see more police presence near their homes.

The left’s baseless claims that all cops are racist also obstruct any nuanced discussion on the issue. Rather than encouraging real and necessary police reform, it has led to resistance to any reform at all.

And reform does need to happen. The fear that some African Americans feel during police interactions is real.

Even as a staunch, pro-police conservative, I also feel nervous, even anxious, when being stopped by police.

Recently on an episode of my podcast, "Outloud with Gianno Caldwell," I tackled this very issue with the stars of "The Real Housewives of Atlanta," Mike Hill and Cynthia Bailey. We discussed the fact that even they, with all of their celebrity and notoriety, fear being pulled over by the police and where that stop may lead.

This shouldn’t be the case for any law-abiding citizen. For years, the National Organization of Black Law Enforcement Executives has been trying to change that by advocating for race sensitivity training, the increased recruitment of African-American officers, and national use-of-force guidelines. This is the kind of reform we need.

Sen. Tim Scott, the only Black Republican in the Senate, made it clear that he, too, supports Chauvin’s guilty verdict as well as meaningful change.

"We know there is more work to be done to ensure the bad apples do not define all officers — the vast majority of whom put on the uniform each day with integrity and servant hearts," he said in a statement. "We must all come together to help repair the tenuous relationship between law enforcement and Black and minority Americans."

Sen. Scott is again working on police reform after Democrats shut down such efforts last year in order to inflame racial divisions so they could win political races. I hope and pray that Democrats don’t once again obstruct the senator’s important push for police reform.

This shouldn’t be a partisan issue. Indeed, to make a real difference, both parties must put aside politics and come to the table. And Democrats need to stop assuming — absurdly and erroneously — that all law enforcement is racist.

Until we can have an honest dialogue with each other, the system will remain broken. That’s not a country any of us should want.