Obama's leadership proves presidency is no place for amateurs 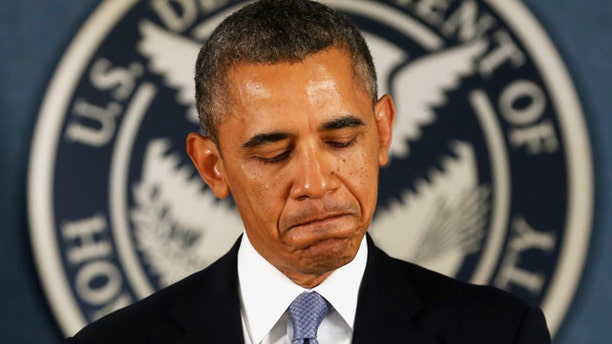 U.S. President Barack Obama reacts as he speaks about the government shutdown during a visit to the Federal Emergency Management Agency (FEMA) in Washington October 7, 2013. (Reuters)

“I sit here all day trying to persuade people to do the things they ought to have sense enough to do without my persuading them,” Harry Truman once lamented. “That’s all the powers of the President amount to.”

As usual, the plain-speaking Truman got it right: presidential power is the power to persuade. Too bad the current occupant of the White House has never learned this basic lesson.

Barack Obama’s refusal to negotiate with the Republicans in Congress on the government shutdown is proof once again that he doesn’t understand the first thing about presidential leadership.

Strangely enough, this one-time constitutional lawyer fails to grasp the fact that the president of the United States does not obtain results by giving orders.

Thanks to our Constitution’s separation of powers, he can’t get action without bargaining with Congress. The presidency and Congress are inextricably linked; one can’t govern without the other.

Obama has ignored this simple truth since he became president. With ObamaCare, he allowed Nancy Pelosi and her liberal Democratic cohort to ram through the most sweeping—and flawed—piece of social legislation in more than four decades without a single Republican vote, guaranteeing that the unpopular law will be challenged for years to come.

Compounding this mistake, he then handed out waivers and exemptions to the law to politically connected businesses, including restaurants and nightclubs in Nancy Pelosi’s district.

Despite his public posturing , he wasn’t at all unhappy about the partial government shutdown, because it allows him to demonize the Republicans in the run-up to the 2014-midterm elections.

But now, faced with a prolonged shutdown and a debt-ceiling crisis to boot, he finds that he can’t politic his way out of the mess, so he’s trying to campaign his way out, calling the Republicans every name in the book.

But his job is to govern, to lead, to find common ground, to persuade.

Unfortunately, Barack Obama is not wired to do that.

As I pointed out in my book, "The Amateur," Obama is inept in the arts of management and governance. He doesn’t learn from his mistakes, but repeats policies that make our economy less robust and our nation less safe.

He is, in short, a strange kind of politician, one who derives no joy from the cut and thrust of politics, but who clings to the narcissistic life of the presidency.

According to Lawrence Summers, who served as secretary of the treasury under Bill Clinton and director of the National Economic Council under Barack Obama, “Obama really doesn’t have the joy of the game. Clinton basically loved negotiating with a bunch of other pols, about anything. If you told him, God, we’ve got a problem. We’ve got to allocate all the office space in the Senate. If you could come spend some time talking to the majority leader in figuring out how to allocate office space in the Senate, Clinton would think that was pretty interesting and kind of fun. Whereas, Obama, he really didn’t like these guys.”

Vernon Jordan, a longtime Democratic Party wise man, agrees. “Consultation is not in the DNA of the Obama administration,” Jordan told me.

“Some time ago, while Obama was on vacation in Martha’s Vineyard, he invited me to join a foursome and play a round of golf at the Vineyard Golf Club in Edgartown. I was paired with the president’s assistant, Marvin Nicholson, and the president played with Mayor [Michael] Bloomberg, who at the time was being considered as a possible replacement for [Timothy] Geithner as secretary of the treasury. When the round of golf was over, the president immediately left. And Bloomberg turned to me and said, ‘I played four hours of golf with the president and he didn’t ask me a goddam thing.’"

“The Obama administration resembles the [Jimmy] Carter administration in being closed like that,” Vernon Jordan went on. “No matter how obstructive the Republicans may be, Obama has the responsibility of leadership. I’m worried that he’s overplaying his hand in saying that it’s all the Republicans’ fault. That may be true, but what are you, Mr. President, going to do to bring them around?”

At some level, Obama is aware of his own shortcomings.

For instance, shortly before he was scheduled to address the Business Roundtable, Jack Lew, then the director of the Office of Management and Budget, was asked if there was any subject the business leaders should not raise with the president. “Yes,” said Lew. “Don’t ask about leadership. He’s sensitive about the criticism that he hasn’t provided strong leadership.”

“The presidency is no place for amateurs,” Richard Neustadt pointed out in his landmark study, Presidential Power and the Modern Presidents. “[The office of the president needs] experienced politicians of extraordinary temperament. … That sort of expertise can hardly be acquired without deep experience in political office. The presidency is a place for men of politics. But by no means is it a place for every politician.”

It is no place for Barack Obama.