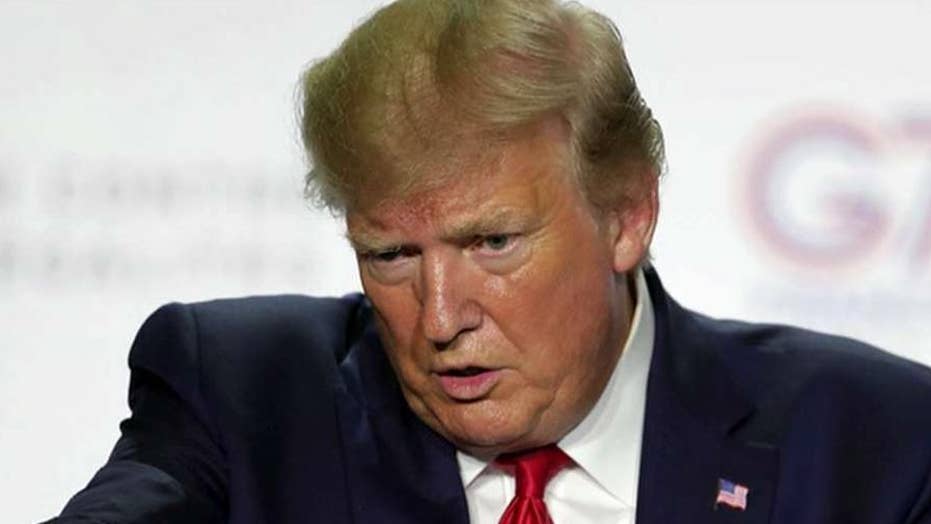 The Trump administration's inability to defend the defensible is simply mind-numbing. Even when the president is doing the right thing, he and his team can't seem to get out of their own way.

Take the administration's perfectly reasonable decision to implement a new rule to ensure that immigrants seeking permanent residency in the U.S. are not on the dole. Decades ago, Congress passed a law declaring that a person likely to become a "public charge" may be denied residency, but the law was difficult to enforce because it did not explicitly define what a public charge is.

The Trump administration's new rule fixes that, defining a public charge as someone who "receives one or more public benefits," including Medicaid, food stamps and public housing. To most Americans, this is common sense. Legal immigrants seeking work are welcome in the United States; those seeking handouts are not.

But then President Trump's acting director of the U.S. Citizenship and Immigration Services, Ken Cuccinelli, decided to rewrite Emma Lazarus's words etched on the base of the Statue of Liberty.

Asked in an NPR interview whether the words "Give me your tired, your poor" are still part of the American ethos, Cuccinelli replied that what Lazarus really meant to say was: "Give me your tired and your poor who can stand on their own two feet and who will not become a public charge." The president's critics pounced on the unforced error.

Lazarus did not need Team Trump's editing. She wrote: "Give me your tired, your poor, your huddled masses yearning to breathe free" – not yearning for food stamps or free government health care. Trump is not changing the American ethos; the Democrats who want to give free stuff to foreigners are. Not difficult.

For another example of the Trump team getting in its own way, take China. There is bipartisan agreement that China is an economic predator that must be confronted. As part of its effort to challenge Beijing, the Trump administration has been encouraging U.S. businesses to shift production away from China.

Encouraging such economic disengagement from China is perfectly fine. Ordering it is not. But that is precisely what Trump did last week.

After China imposed new tariffs on American goods, the president announced via Twitter: "Our great American companies are hereby ordered to immediately start looking for an alternative to China."

Ordered? Trump National Economic Council Director Larry Kudlow said Trump did not really mean it. "What he is suggesting to American businesses," Kudlow said, is that "you ought to think about moving your operations and your supply chains away from China."

No, the president tweeted, he really meant it. "Try looking at the [International] Emergency Economic Powers Act of 1977," he wrote, "Case closed!"

Not really. If Trump ever actually tried to use this law to "order" U.S. businesses to leave China, he would almost certainly be overturned by veto-proof majorities in both houses of Congress. Once again, the president took a completely reasonable policy and turned it into a needless controversy.

President Trump was absolutely right to call out Democratic Reps. Ilhan Omar of Minnesota and Rashida Tlaib of Michigan for their virulent anti-Semitism -- including their charge that Israel's supporters in Congress are disloyal to America and, as Tlaib put it, "forgot which country they represent."

But then, Trump declared that "any Jewish people that vote for a Democrat" show "either a total lack of knowledge or great disloyalty" – inadvertently using the very same anti-Semitic trope that got Omar and Tlaib in trouble in the first place.

Democrats used Trump's words to turn the tables on him. Senate Minority Leader Charles Schumer, D-N.Y., tweeted: "When he uses a trope that's been used against the Jewish people for centuries with dire consequences, he is encouraging – wittingly or unwittingly – anti-Semites throughout the country and world. Enough."

It was ridiculous because Trump is the most pro-Israel president in U.S. history. And the same Democrats who had just been defending Omar and Tlaib five minutes earlier were now accusing Trump of anti-Semitism. Yet, Trump handed them an opening – and lost the moral high ground.

This self-defeating pattern is undermining the Trump presidency. If you hit the mute button, the administration is doing a great job in many areas. Reforming our immigration system to reward work and discourage dependency; taking on China's predatory trade practices; standing up for Israel and against anti-Semites are all good policies. But when the sound comes on, the chaos and lack of discipline drown it all out.