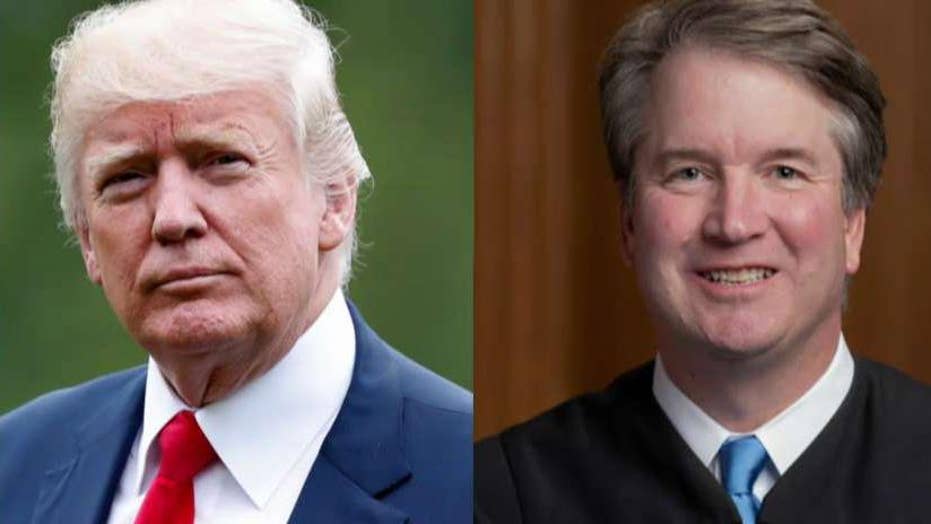 Despite major holes in The New York Times story, members of 'The Squad' are calling for Brett Kavanaugh's impeachment and other top Democrats are attacking the FBI's investigation into the allegations; reaction and analysis on 'The Five.'

The latest smear on Supreme Court Justice Brett Kavanaugh is a disaster for Democrats, and everyone seems to know it except the party's presidential candidates.

No sooner had The New York Times published a new, unsubstantiated allegation of sexual misconduct by Kavanaugh, then most of the candidates demanded Kavanaugh's impeachment.

"These newest revelations are disturbing," Sen. Elizabeth Warren, D-Mass., wrote on Twitter, adding "Like the man who appointed him, Kavanaugh should be impeached."

Sen. Kamala Harris, D-Calif., declared Kavanaugh's "place on the court is an insult to the pursuit of truth and justice. He must be impeached."

Even former Vice President Joe Biden demanded Congress open an investigation and "follow the evidence to wherever it leads." That was considered the restrained response in the Democratic field.

Never mind that the supposed victim has told friends she has no recollection of the alleged incident; facts have never stood in the Democrats' way when it comes to Kavanaugh before. If the Democratic presidential contenders want to see Kavanaugh impeached, I say go for it. Open the investigation Biden has demanded. Start impeachment hearings. And broadcast it for all of America to see.

Let's remind voters of the disgraceful confirmation process Kavanaugh faced. Let's relive how Democrats accused Kavanaugh of sexually assaulting a teenage girl, exposing himself to a college classmate and participating in gang rapes at high school parties -- all without a shred of corroborating evidence.

Let's rehash Christine Blasey Ford's allegations, but this time with the knowledge that the principal witness Ford named to her alleged assault, Leland Keyser, is now on record saying she does not believe Ford. Let's remind Americans how Senate Democrats denied Kavanaugh the presumption of innocence and insisted that the burden was on him to prove he was not a sexual predator.

That sure worked out well for Democrats last time around. In 2018, the Kavanaugh debacle may have cost Democrats control of the Senate. Sens. Heidi Heitkamp, D-N.D., Joe Donnelly, D-Ind., and Claire McCaskill, D.-Mo., lost their seats thanks to voters disgusted by their party's campaign of character assassination against Kavanaugh, while Democrats blew a chance to pick up GOP seats in Tennessee and Texas.

As Senate Majority Leader Mitch McConnell, R-Ky., said at the time, the Kavanaugh hearings were "like an adrenaline shot" for the Republican base. Now, Democrats want to bring out the hypodermic needle for the 2020 elections. Sounds good to me.

On Capitol Hill, Democratic leaders know this a path to disaster. In a stunning rebuke of the party's presidential contenders, Senate Minority Whip Dick Durbin, D-Ill., told those calling for Kavanaugh's impeachment to "get real." "We've got to get beyond this 'impeachment is the answer to every problem,'" Durbin said. "It's become a knee-jerk reaction among many Democrats that if you're unhappy with President Trump or some of his appointments, impeachment is a recourse. ... If that's how we are identified ... we run the risk that people will feel we're ignoring the issues that mean a lot to them as families."

House Speaker Nancy Pelosi, D-Calif., was even more succinct. Asked if the House was going to investigate the new allegation, she said "no."

Durbin and Pelosi understand that the threats to impeach Kavanaugh are a godsend for Trump. And they come in the wake of Senate Democrats issuing an unprecedented threat to the other Supreme Court justices. In a brief, they warned that if the high court does not rule as Democrats wish in a gun case, they could "restructure" the court when they take power in the 2020 elections -- packing it with liberal justices, flipping a 5-to-4 conservative majority to a liberal majority.

Democrats do not seem to realize that when they make threats like these, they are not hurting Kavanaugh or Trump, they are hurting themselves. In 2016, 26 percent of Trump voters said Supreme Court nominees were the most important issue to them, while only 18 percent of Hillary Clinton's voters mirrored the sentiment. As we have seen in the past two elections, when the Supreme Court is on the ballot, Democrats lose.

In other words, Democrats should not want voters to be thinking about Kavanaugh or liberal court-packing when they cast their ballots in 2020. Republicans should. So, let the impeachment proceedings begin.