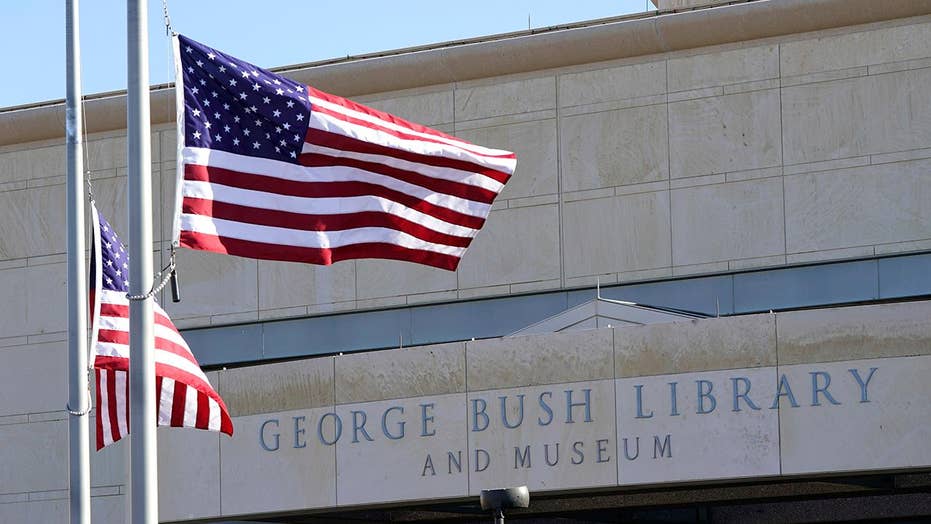 41st president will be laid to rest at The George H.W. Bush Presidential Library and Museum at Texas A&amp;M University; William La Jeunesse reports on the preparations.

President George H.W. Bush called on us to be a "kinder, gentler nation." Sadly, we are far from that ideal. Our politics has never been that kind and gentle, to be sure, even in Bush's day. Still, it has been unseemly to watch how some on both the right and the left have pounced on Bush's passing as an opportunity to get in a dig at the current occupant of the Oval Office. Bush is not even buried yet, and already he is being used as a political cudgel.

No one would be more appalled by this than Bush himself. During the 1992 campaign, he faced personal attacks that he no doubt considered unfair. Yet, on his last day as president, Bush left a note for the man who defeated him that read, "You will be our President when you read this note. I wish you well. I wish your family well. Your success now is our country's success. I am rooting hard for you." It is a sentiment that the 41st president would surely have applied not just to his immediate successor but also to all those who succeeded him as president. Today, many are praising Bush for this gesture, but too few seek to imitate it.

This week of mourning should be a time to hit the pause button on the politics of contempt. It should be a time, instead, to celebrate George H.W. Bush and educate a new generation about the world they inherited from America's last leader from the Greatest Generation. Like all presidents, Bush had his flaws. He made his share of mistakes. But he was also a consequential president whose single term in office profoundly shaped the world we inhabit today. We take the peaceful collapse of the Soviet Union for granted now, but it didn't have to end that way. The U.S.S.R. was the most heavily armed empire in human history. Yet it fell without a shot fired. Its bloodless demise was no easy task. The same is true of the unification of Germany, the reality of a Europe whole, free and at peace, and a Pax Americana that has protected the advance of freedom in the post-Cold War world.

Yes, Bush set an example of civility in office -- and we should celebrate that, too. But it is better for us to shine a light on his example than to use it as a tool in our current wars of incivility. Bush was not naive. In his day, he was accused of racism, lying about his role in Iran-Contra, "coddling dictators" in Beijing and war-mongering in the Middle East. And long before there was the fiasco of the Brett Kavanaugh hearings, we had the fiasco of the Clarence Thomas hearings. Bush spent decades in the corridors of power -- from Capitol Hill to the United Nations, the Republican National Committee, the Central Intelligence Agency and finally the Oval Office -- so he knew Washington too well to expect us to be kind and gentle. What he asked of us was to strive to be kinder and gentler. We seem to have stopped even trying.

Perhaps, for just a few days, we can be the America he wanted us to be. Perhaps we can spend just a few days without the partisan bickering, the personal insults, the nonstop outrage and resistance -- and celebrate the grace, generosity and gentleness of this good man. In his inaugural address, Bush declared, "This is a day when our nation is made whole, when our differences, for a moment, are suspended." The same should be true of the day when we lay him to rest.

With his passing, George H.W. Bush has given us an opportunity to put aside our contempt and come together as a nation. That is his parting gift to us. The best way we can honor him is by emulating him, if but for a few brief moments.

May he rest in peace.