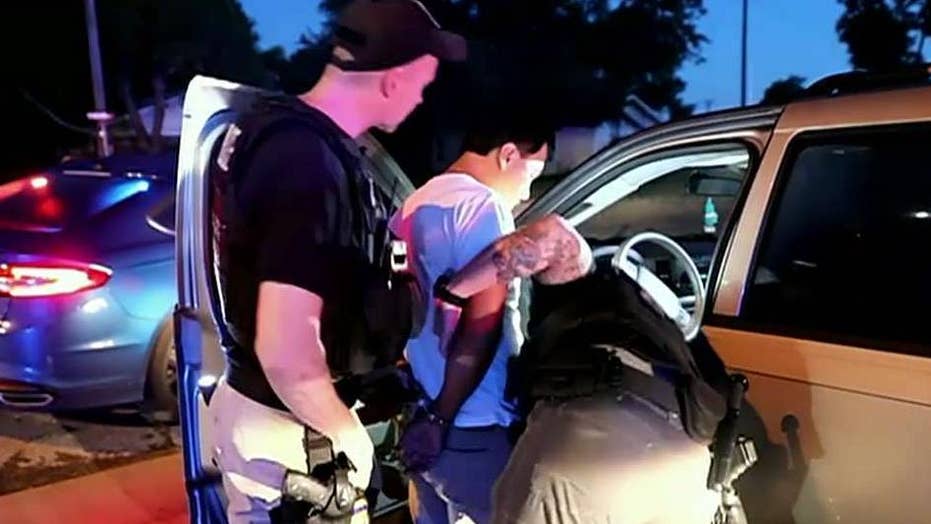 We have heard a lot about the importance of the rule of law from Democrats lately. During Special Counsel Robert Muller's investigation of President Trump, Democrats in Congress delivered a clear and unified message.

"No one is above the law, especially the president of the United States," declared House Speaker Nancy Pelosi, D-Calif.

Donald Trump is the most corrupt president in our lifetime. ... No one is above the law. Not even the president," said Sen. Elizabeth Warren, D-Mass.

"Everyone should be held accountable. And the president is not above the law," said Sen. Kamala Harris, D-Calif.

Republicans "are basically saying that in America one man is above the law and that's not a fact," said Senate Minority Whip Richard Durbin, D-Ill.

"No one is above the law [and] everybody ought to be held accountable," said South Bend Mayor Pete Buttigieg.

No one, that is, except illegal immigrants.

Fast-forward to this past weekend, when the Trump administration announced that Immigration and Customs Enforcement (ICE) officers would soon begin enforcement actions to remove illegal immigrants who have been issued final deportation orders by a federal judge. Those same Democrats and the rest of their party delivered a clear and unified message.

Since Trump took office, Democrats have become the party of illegal immigration.

"It's so appalling, it's outside the circle of civilized human behavior," said Pelosi.

"The aim is to scare immigrant communities. ... And so, he's going to ... do these raids which is a crime against humanity," said Harris.

"We are on your side, we stand with you together," Durbin told activists protesting ICE enforcement.

"It's really designed to strike fear into people at a moment when fear is something we've got way too much of in this country," said Buttigieg.

So, Democrats were for rule of law when it came to the Mueller probe, which did not find that the president broke the law. But they are against rule of law when it comes illegal immigrants who have been found by a federal judge to be in violation of U.S. immigration law.

Illegal immigrants subject to ICE enforcement have been given their constitutional right to due process, with the right to a hearing in a federal immigration court and the right to be represented by counsel. If they show up at their hearing and are not granted relief by an immigration judge, they have the right to appeal. If they lose that appeal, they are issued a final order of removal.

Once a final order of removal is issued, the immigrants must either voluntarily depart the U.S. or turn themselves in to an ICE facility for deportation. If they fail to depart or turn themselves in, then their case is referred to the ICE fugitive unit, which is tasked with finding them.

It is a long process to get to the point where ICE is knocking on someone's door to enforce a final order of removal. Those now subject to a final deportation order either failed to show up to immigration court; showed up and lost their case; waived their right to appeal; lost their appeal; did not show up for their appeal hearing; were granted voluntary departure but did not leave; or failed to turn themselves in to ICE for court-ordered removal.

In each case, a federal judge has ruled that they do not have the right to be in the United States and must leave. But Democratic leaders are now saying they should be allowed to stay, in contravention of our immigration laws.

Then again, Democrats didn't think this way when they held the White House. President Barack Obama deported far more illegal immigrants than Trump. Axios reports that "under the Obama administration, total ICE deportations were above 385,000 each year in fiscal years 2009-2011, and hit a high of 409,849 in fiscal 2012."

I don't recall Democrats in Congress accusing Obama of a "crime against humanity" or actions "outside the circle of civilized human behavior."

Back then, Democrats agreed. As Sen. Charles Schumer, D-N.Y., put it in a 2009 speech, "illegal immigration is wrong, plain and simple."

Since Trump took office, Democrats have become the party of illegal immigration. They want to decriminalize illegal border crossings, cut ICE detention beds to force the agency to release illegal immigrants and then refuse to enforce lawful deportation orders. So, it's a little hard to take Democrats seriously when, in investigating Trump, they claim to be fighting for the principle that no one is above the law.