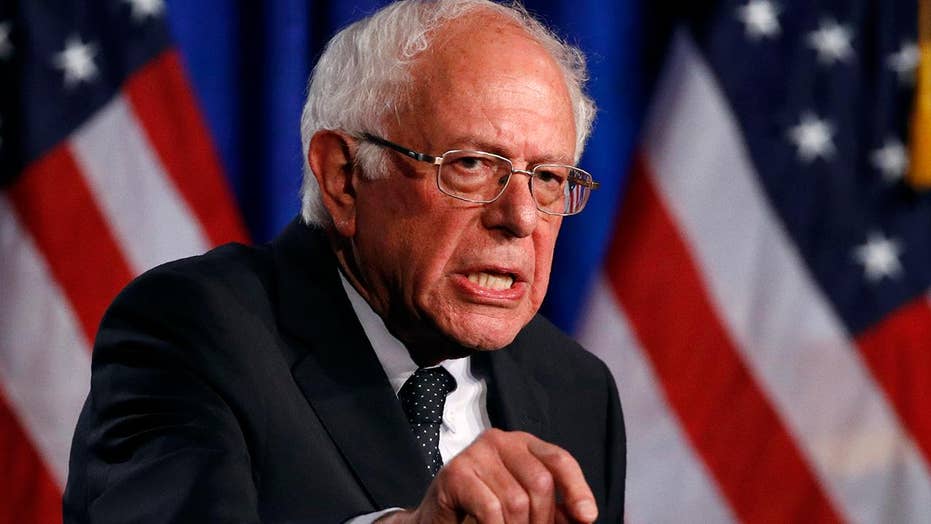 Because field organizers are working 60 hours a week, according to the union, their annual salary of $36,000 works out to $13 an hour -- well below the $15-an-hour federal minimum wage Sanders has called for.

It gets worse. When the Sanders campaign offered to raise salaries to that level, the union rejected the offer. Why? Because "the raise would have elevated field staff to a pay level responsible for paying more of their own health-care costs."

It turns out that Sanders pays only 85 percent of health care premiums for campaign staff making more than $36,000 – despite campaigning on a promise of free health care for all with "no premiums, no deductibles, no co-payments, no out-of-pocket expenses."

So, what was Sanders's solution? First, he cut the hours of his field staffers from 60 to about 43 a week -- which meant the campaign could say it was paying $15 an hour without actually increasing field organizers' pay. Then on Monday, his campaign finally gave in and agreed to raise salaries to $42,000, preserve full health premium coverage and limit workers' hours to 50 per week.

In Sanders's case, the majority of his donations come from small donors – ordinary Americans who are sacrificing their hard-earned money to help get him elected, not to fund social welfare for political operatives.

During the dispute, Sanders's campaign defended its policies, declaring: "We know our campaign offers wages and benefits competitive with other campaigns."

Well, McDonald's offers wages competitive with other fast-food chains, but that has not been good enough for Sanders. He has marched with McDonald's workers, and attended Walmart shareholder meetings, to demand they be more generous with their workforces. How could he demand those companies provide pay and benefits that he was resisting giving his own employees?

Now the union has forced Sanders to capitulate on wages and health care. But why stop there? The Sanders union seems to be suffering from a lack of imagination. If union organizers really want to hold Sanders to his own standards, then a $15 minimum wage and premium-free health care should be only the beginning.

Sanders has promised to cover the cost of prescription drugs and make sure "no one in America pays over $200 a year for the medicine they need." He has promised to pay for "universal childcare and pre-kindergarten." He has promised free college, because "you are not truly free when the vast majority of good-paying jobs require a degree that requires taking out tens or hundreds of thousands of dollars of debt to obtain."

Sanders has promised to "free generations of Americans from the outrageous burden of student loans by canceling all existing student debt." Is he setting an example by providing all these benefits to workers on his campaign?

Of course not. Because if he did, his campaign would quickly run out of cash. Ah, but there's the rub. As former British Prime Minister Margaret Thatcher famously put it, "the trouble with socialism is that eventually you run out of other people's money."

A political campaign literally runs on other people's money. It is bare-bones operation, in which staffers choose to work ridiculous hours for low pay, and rely on donations from supporters to get the candidate's message out.

In Sanders's case, the majority of his donations come from small donors – ordinary Americans who are sacrificing their hard-earned money to help get him elected, not to fund social welfare for political operatives.

Every dollar his campaign spends on higher pay and free stuff for campaign workers is a dollar not spent on campaign ads in Iowa and New Hampshire. And if his campaign can't get those ads on the air, then Sanders will lose – and his entire team will lose their jobs, their benefits and their chances of a cushy White House job. Then they won't ever get access to the United States Treasury and the chance to really spend other people's money.

So, we should all be grateful to the UFCW Local 400 for pulling more Sanders campaign money off the airwaves and into the pockets of Sanders's field workers, while limiting the hours they can work to spread his socialist message. They've done the country a great service.