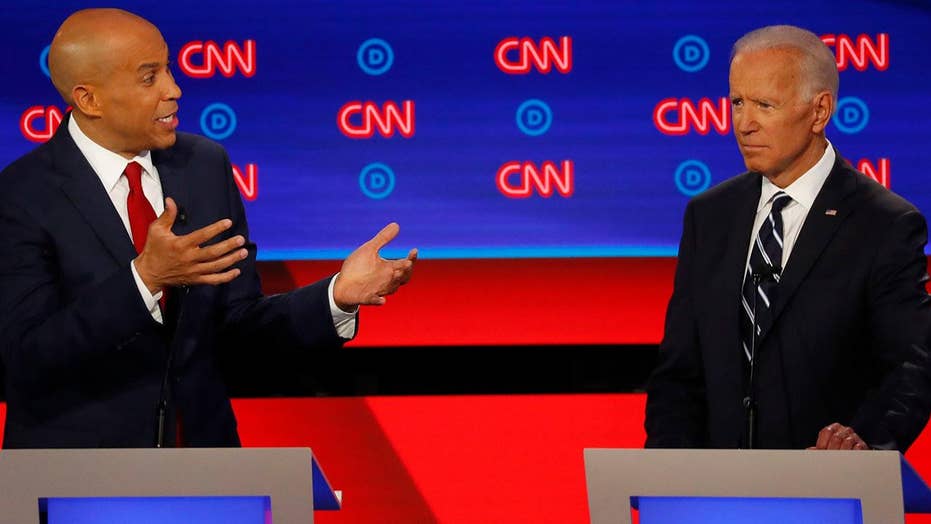 Here’s a word that was not once uttered by any of the 10 Democratic presidential candidates who gathered for the second night of the debates held in Detroit Wednesday: growth.

Not a single person on the stage at the CNN debate discussed how he or she might increase the incomes of Americans or how to create jobs. Instead, inspired by the fleeting success of Sen. Kalama Harris of California in the first round of debates, they all came armed to take down frontrunner former Vice President Joe Biden.

What a sorry spectacle it was. Poor Biden, tripping over his garbled defense of his 1994 crime bill support, his vote in favor of the Iraq war, his op-ed opposing tax breaks for childcare, and so much more. Biden was attacked by nearly every rival, each one hoping that the next day’s headlines would show that he or she had successfully skewered the former vice president.

New York City Mayor Bill de Blasio – polling at less than 1 percent – clearly hoped that going after Biden was his ticket to the next round of debates in September (it won’t be). De Blasio attacked Biden for the former vice president’s prior enthusiasm for the Trans-Pacific Partnership trade bill and for the large number of deportations of illegal immigrants carried out by the Obama administration.

Harris followed up on her earlier confrontations with Biden by challenging him on his past support of the Hyde Amendment, which outlawed the use of federal funds for most abortions.

But at the end of the debate, de Blasio smugly assured Biden that “we believe in redemption,” as if he had the authority or stature to judge Obama’s veep, or Harris’s demand to know why it took Biden so long to change his opinion on Hyde.

The other candidates didn’t need to beat up on Biden to make him look weak; he did it to himself.

Several times Biden abruptly stopped speaking, presumably in deference to the debate moderators, but more obviously because he was worried he couldn’t successfully complete his thoughts. He frequently fumbled facts, not the least at the end when he projected the dire consequences of “eight more years of Trump.” Someone needs to remind Biden that President Trump cannot serve eight more years.

Biden also came armed with facts and history with which to take on his rivals, going after Harris on her record as California attorney general and needling Sen. Cory Booker of New Jersey on his management of Newark when he was the city’s mayor.

But Biden landed only glancing blows, his delivery rumpled.

Here’s where all the candidates agree: President Trump poses an existential threat to the soul of the nation, as Biden put it, and must be evicted from the White House in the 2020 election.

Not everyone joined in the attack on Biden. Businessman Andrew Yang, who astonishingly has earned an average 1.8 percent in the polls, according to RealClear Politics – ahead of Booker and former Housing and Urban Development Secretary Julian Castro – stuck to selling his plan to give every adult American $1,000 per month. He said the payments would combat what he describes as the devastation of automation.

No matter the topic, Yang managed to segue back to his promise of a guaranteed income. He may be a one-trick pony, but his idea is interesting and by comparison to his competitors’ hysteria about the ills of the country, constructive.

Plus, Yang offered up one of the few clever lines of the night, proclaiming himself “the opposite of Donald Trump, an Asian who loves math.”

The night before, progressive democratic socialist Sen. Bernie Sanders of Vermont and Sen. Elizabeth Warren of Massachusetts had battled moderates – including former Rep. John Delaney of Maryland and Sen. Amy Klobuchar of Minnesota – on issues like “Medicare-for-all” and the Green New Deal.

The Democratic candidates debating Tuesday night were divided on whether their party could beat President Trump by embracing big “bold” new programs that would upend the economy and result in higher taxes. Though it was testy at times, their exchanges were not personal. Also, there was passion.

The second night’s discussion was quite personal, especially when the candidates spent much of their time and effort criticizing their past positions. But as a result, the discussion was mired in the past.

Warren may be a frightening zealot, but she clearly believes in her vision of the future and is willing to fight for it. Harris, Booker, Sen. Kirsten Gillibrand of New York and other presidential candidates failed to offer a clear and compelling vision of how they would make life better for average Americans.

An exception was Washington Gov. Jay Inslee, who says battling climate change should be the nation’s top priority. He is nowhere in the polls, and, despite voters indicating they are worried about global warming, it is unlikely he’ll be in the race much longer. Up until now, most people have not voting been voting based on this issue.

As in the first round of debates, most of the candidates took positions Wednesday that will unnerve moderate Democrats. These include decriminalizing illegal entry into the United States; “taxing the hell out of the wealthy,” as de Blasio put it; dumping private health insurance; and offering free public college tuition.

Someone, soon, is going to add up the costs of all these programs and hang it around the eventual nominee like a yoke, because that is what it will be.

Also unnerving to those Democrats who are keen to take back the White House will be the near-unanimous enthusiasm among presidential hopefuls for impeaching President Trump.

Democratic Party leaders like House Speaker Nancy Pelosi of California and Senate Minority Leader Chuck Schumer of New York see this impeachment as a losing political proposition. But on the debate stage Castro, Harris, Booker, and de Blasio, among others, pushed to impeach.

Here’s where all the candidates agree: President Trump poses an existential threat to the soul of the nation, as Biden put it, and must be evicted from the White House in the 2020 election.

Because the candidates know that a thriving economy is Trump’s best weapon for reelection, the topic barely came up. There was almost no discussion of the low unemployment rate, record stock prices, accelerating wages for low-income Americans, and the huge recent rise in consumer sentiment.

From the Democrats’ point of view, the less said about the nation’s prosperity and optimism the better.