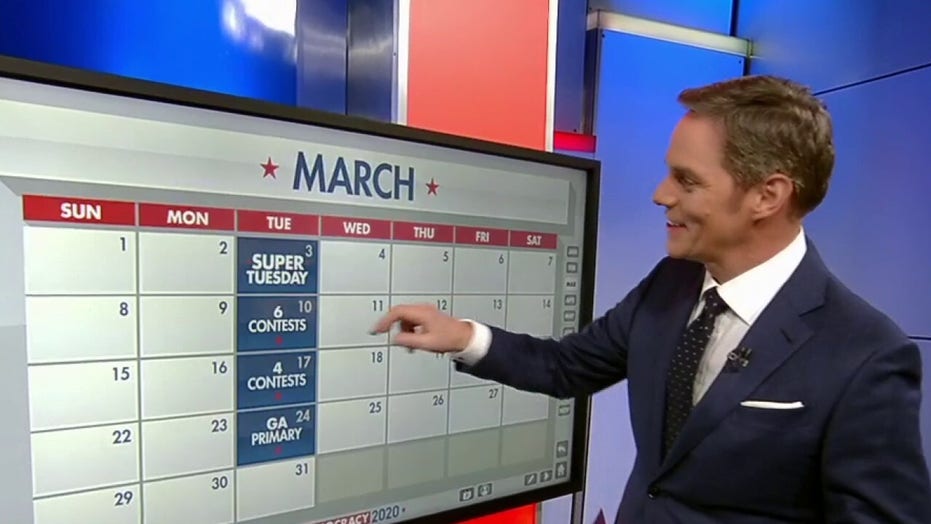 Looking at the Democrat delegate race heading into Super Tuesday

Bill Hemmer breaks down the numbers after the polls close in South Carolina.

Biden captured 48 percent of the vote, compared with just 20 percent for Sanders. Other candidates were far back in the pack, with none winning at least 15 percent of the vote – the minimum needed to pick up delegates to the Democratic National Convention

Biden is counting on his impressive win in South Carolina – exceeding his expected margin of victory in opinion polls before the vote – to help him do well in the Super Tuesday primaries in the week ahead.

While a total of 54 pledged delegates were at stake in South Carolina, an enormous 1,357 delegates are in play in the Super Tuesday states of Alabama, Arkansas, California, Colorado, Maine, Massachusetts, Minnesota, North Carolina, Oklahoma, Tennessee, Texas, Utah, Vermont and Virginia, as well as American Samoa and Democrats Abroad.

To stop Sanders' march to the nomination, poorly performing candidates will need to drop out of the race to consolidate the moderate vote behind one or at most two candidates who can compete with the solid grip Sanders has on the most progressive Democratic voters.

The field began narrowing Saturday night, when Fox News reported that billionaire and environmentalist Tom Steyer – who was in third place in the South Carolina primary with 11 percent of the vote – is ending his presidential campaign. We can expect more candidates to exit as well – the only question is when.

The wild card on Super Tuesday will be former New York City Mayor Michael Bloomberg, who skipped the first four nominating contests in Iowa, New Hampshire, Nevada and South Carolina and who has spent roughly $500 million of his own money on a massive nationwide ad campaign focused largely on the Super Tuesday states.

Biden placed fourth and fifth in Iowa and New Hampshire and then placed second in Nevada – a discouraging start that made a victory in South Carolina vital. The lifeline Biden received from South Carolina voters has kept his candidacy from sinking.

According to polls, approximately 60 percent of the voters in South Carolina are African-American. As the vice president of the nation’s first black president, Barack Obama, and as a champion of civil rights throughout his long political career Biden enjoys strong support among African-American voters.

Polling showed Biden had more than three times as much support than Sanders among black voters – 60 percent to 17 percent.

Nevertheless, Bloomberg’s advertising blitz has boosted him in polls among black voters around the nation, and Sanders has also been picking up strength.

That makes Biden’s huge victory margin in South Carolina all the more impressive.

The Biden win should help him get more badly needed campaign contributions as he seeks to become the major challenger to Sanders and should give many voters the confidence to back the former vice president on Super Tuesday.

A weak showing by Biden in South Carolina would have been disastrous to his candidacy, convincing significant numbers of moderate voters that his candidacy was doomed and prompting them to cast ballots for Bloomberg or other candidates on Super Tuesday.

Critics who mocked Biden for touting his relationship with Obama were proved wrong. Polling showed 52 percent of primary voters in South Carolina said the next president should return to Obama’s policies – only 27 percent said they supported more liberal policies.

Those numbers can’t be ignored looking forward to Super Tuesday and the general election in November.

Significantly, in recent days Sanders has been gaining increasing support in both California and Texas – the two states with the most delegates at stake on Super Tuesday – especially among Latinos.

Presidential races are full of surprises. A bad debate performance, scandals from a candidate’s past uncovered by reporters or opposition research, and developments in the news have all had major impacts on past races.

The bottom line is that the race for the Democratic presidential nomination is far from over. And since no candidate has ever spent as much as Bloomberg to try to become a presidential nominee, we just don’t know now if that will be enough to position him as the leading moderate challenge to Sanders.

One thing is certain: we’ll have a much better idea of where the race is headed after we know the results of Super Tuesday voting.