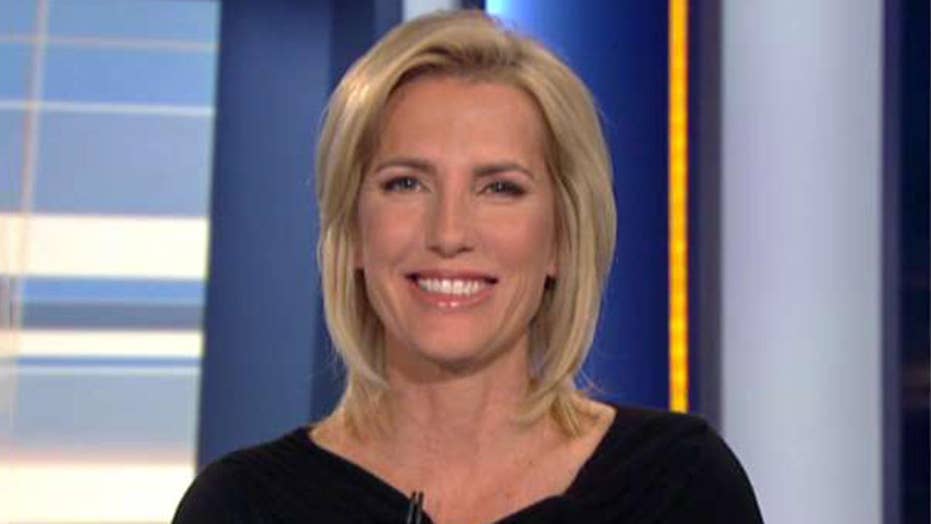 Ingraham: Democrats move left and eat their own

Over the weekend, there were a pair of stories that demonstrate just how intense the left is on rewriting ethical codes and conscripting what can and can't be said. Democrats move left and eat their own.

In the 20 years that I've been covering our border issues, there was always at least one point of agreement on both sides of the issue: That new immigrants should work hard to speak English. Doing so would help ensure their success here and also speed up assimilation.

Well, in today's Democratic Party, things are moving so far left and so fast that the entire “speak English” sentiment has become radioactive. Enter liberal lion Tom Brokaw. He was appearing on "Meet the Press" on Sunday and after he was frankly stereotyping border enforcement advocates, he had the "nerve" to say the following: "I also happen to believe that the Hispanics should work harder at assimilation. That's one of the things I've been saying for a long time. They ought not to be just codified in their communities, but make sure that all their kids are learning to speak English and that they feel comfortable in their communities. And that's going to take outreach on both sides, frankly."

And that's not all folks. It got worse both on and offline for Brokaw, despite his numerous -- and frankly embarrassing-- Twitter apologies. "An idea that we think Americans can only speak English, as if Spanish and other languages wasn't always part of America, is some ways troubling," one pundit said. "He's a little out of touch. What he's saying is just absolutely not true. Latinos absolutely assimilate," another pundit said.

Well, this is how bad it's gotten in the Democratic Party. Of course, a lot, many Latinos have assimilated. But the main point here is English has become controversial. Assimilation in some quarters has become controversial. So, to be an authentic, credible Democrat today, you have to believe that the party's views of just a few years ago are now basically racist, xenophobic and hateful.

This is insane. Something similar unfolded at Duke University over the weekend, as well. The politically correct fanatics and academia put another trophy on the wall when assistant professor Megan Neely, who headed up the university's Biostatistics Master's program, was forced to step down from her post. Her crime: In an email she sent to grad students last Friday, she said two faculty members had come up to her to complain about students loudly speaking Chinese in a common area. She wrote that both were disappointed that the students weren't working to improve their English. Neely's big sin was urging them to "commit to speaking English 100 percent of the time while on campus." Perish the thought.

Again, it wasn't a slam on Chinese. It was kind of a ham-fisted way of encouraging folks to speak our language while in our country, studying, by the way, at one of our premier universities. Now, the email was sent yo ultimately to help the students compete for projects and employment. Why is that a bad thing? The horror.

Again, the accused profusely apologized for her language offense. But it didn't matter. The damage was already done.

Now, look, as I've said many times: Speak Russian. Speak English most of the time. Speak Spanish. It's terrific for kids to speak multiple languages. Being bilingual, trilingual -- that gives kids a huge leg up in this economy and a lot of options. But at the same time, English is our national language. And folks who want to come here legally should learn to speak it. There is nothing racist about saying that at all, unless Obama, George W. Bush, and pretty much every American president is also racist. And if an American who is shopping in a store gets impatient when a cashier can't speak English, that doesn't necessarily make the patron a xenophobe or a bad person. It just means they're frustrated.

Do you know what I was thinking about today? What would Teddy Roosevelt think today? Remember what he said so eloquently in a letter read shortly before his death that he had written in 1919. He said the following: “In the first place, we should insist that if the immigrant who comes here in good faith becomes an American and assimilates himself to us, he shall be treated on exact equality with everyone else. There can be no divided allegiance here. We have room for but one language here, and that is the English language. For we intend to see that crucible turns our people out as Americans of American nationality and not as dwellers in a polyglot boarding house."

It's not just, though, that the English language requirement can set off today's Democrat conformity police. Even a two-term vice president isn't immune. Joe Biden was rapped last week for daring to say a nice thing about a Republican.

"I get in trouble. I read in New York Times that one of my problems is, if I ever to run for president, [is] I like Republicans," Biden said. "OK. Bless me Father, for I have sinned. But from where I come from, how do I get anything done? I don't think anything gets done until we start talking to one another again."

So, common sense from Biden. Sometimes you have to reach across the aisle. He got slammed for that in left-wing quarters.

Now, even a famous comedian is forced to play by the shifting rules of the left today. Remember when it was announced that Kevin Hart was going to be the host of the Academy Awards. Well, 10-year-old tweets were dug up, and Hart was accused of being homophobic.

So, even after he apologized and Ellen came out to support him, the left was not satisfied. Hart will not being hosting the Oscars. The litmus test now for headlining the gig is now so difficult to pass that the Oscars will be host-less this year. Chalk another one up for the sensitivity squad. Nice going, guys.

All this shows that the Democrats, the media and academics are zealous about enforcing borders after all -- their own. They aggressively police their own ever-morphing code of progressive ethics. And if you run afoul of them, their mercenaries will destroy you.

In some cases, even profuse abject -- and yes embarrassing -- apologies will not suffice. So, today you may be part of the cool crowd. But tomorrow, you're all disposable. And walk on eggshells to boot. Good luck with that in 2020.

Adapted from Laura Ingraham's monologue from "The Ingraham Angle" on January 28, 2019.


Laura Ingraham is the host of FOX News Channel’s (FNC) The Ingraham Angle (weeknights 10PM/ET). She joined the network in 2007 as a contributor.