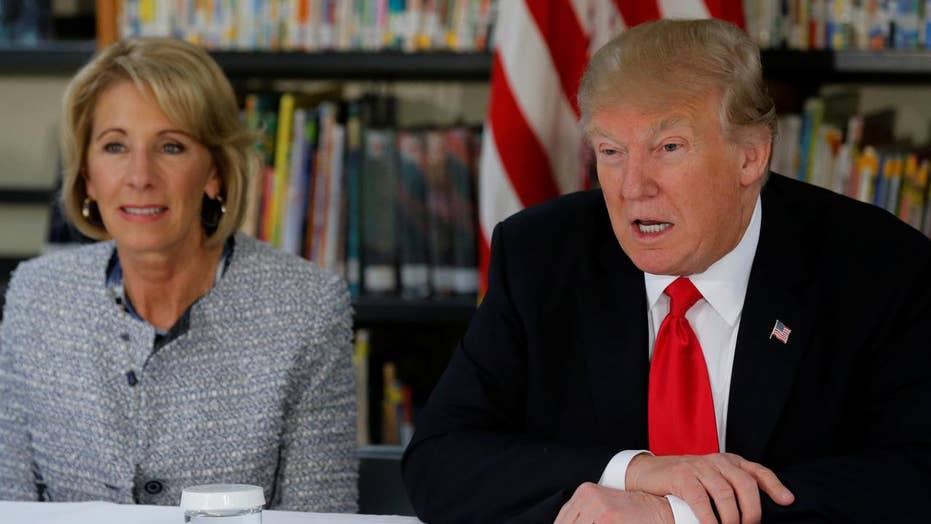 School choice is a noble cause. In much of America, parents have little or no control over where their kids attend school. Local governments assign schools by ZIP code.

Having choice is better. Whether it's vouchers, scholarships, charters, private schools or just having options among public schools, choice makes some schools better because educators have to compete for parents' trust. Competition makes most everything better.

JOHN STOSSEL: GOVERNMENT SHUTDOWN LESSONS -- WE COULD TAKE A CHAINSAW TO SO MUCH OF GOVERNMENT

So we need competition among ideas, too.

There isn't a lot of that in America's schools.

In many places, every kid is taught:

To give students another perspective, I started a charity that offers teachers free study guides, sample lessons and videos that introduce students to free market ideas: Stossel in the Classroom.

Most of the videos are versions of my reporting for Stossel TV, Fox and ABC News, specially edited for students.

In these videos, kids hear from people in parts of the world where markets are not as free and people suffer because of it. After watching, one high school student told us that he now understood that America is "the rare place where you can write the script of your own life."

That idea is important to kids, who don't always feel that they're in control of their lives.

One student, Gabriel Miller, told us, "When I originally went to school, it was all taught from one side: This country is horrible; because you are a minority you can't make it. It made me dislike the country. But after the videos were shown, I felt ashamed for what I initially believed."

He then enlisted in the National Guard. "I wanted to give back for, not only giving my family so much opportunity, but also to protect, defend and serve the people in the United States."

"We never really thought like this before," his classmate Diony Perez told us. "We're taught that the government is... responsible for us and we have to trust them in doing everything for us."

After watching videos about entrepreneurs, Perez decided he didn't want government to take charge of his life. Instead, he started his own business. His company delivers cars to customers without them having to step foot in a dealership.

Students say certain ideas in the videos stand out because they are different from the anti-market messages they usually hear in school.

One that stuck with many was "unintended consequences" -- the idea that laws meant to protect people often end up harming them instead.

A higher minimum wage, for example. Most Americans support that idea, and it does raise some workers' pay. But a minimum also prices young and marginal workers out of jobs by making it illegal for them to get starter experience at lower pay.

Every law, every regulation is announced with the loftiest of intentions -- making the poor richer, protecting the environment, guaranteeing food safety -- but again and again, the laws not only fail to achieve their stated objectives but also make things worse by limiting choices and making it harder for businesses and customers to find mutually satisfying solutions.

Few students understand that. In fact, these days most are more pro-government, even socialist, than their millennial, generation X and boomer predecessors.

Watching these videos in class will help many students open their minds.

One student told us the video series "contradicts all these beliefs about how socialism is great."

I would hope so. Socialism is definitely not great.

Fortunately, about 10 million students will watch these videos in class this year. Some will change their minds.

"I went to my mom. I was like, 'Do you know who's really paying for all this government stuff?'" said Diony.

If you know teachers who might want to use the videos in their classrooms, please tell them about SITC.org. All our resources are free.

School Choice Week isn't just about letting kids and parents choose where they go to school. It also means being able to choose what ideas they learn -- including the concept of choice itself.