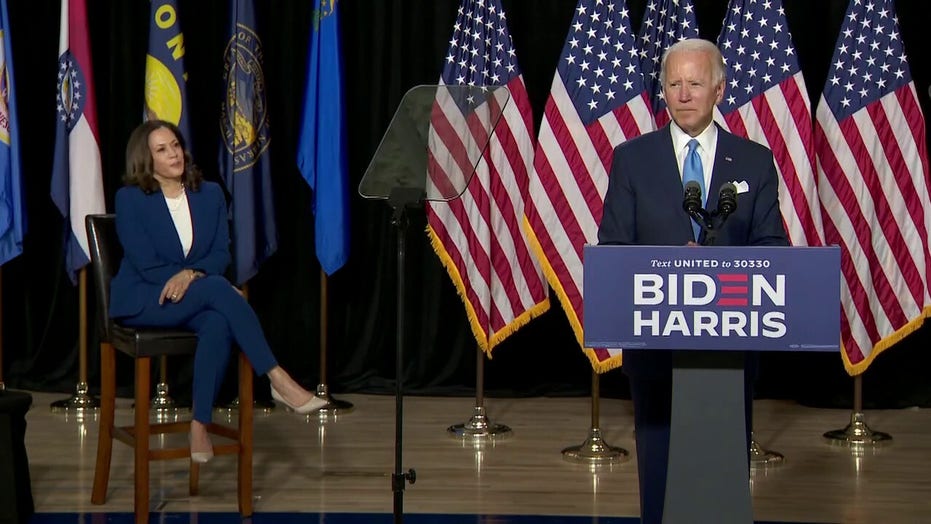 As former Vice President Joe Biden and Sen. Kamala Harris appeared together for the first time Wednesday as the presumptive Democratic presidential and vice-presidential nominees, they marked a sad and dangerous new chapter for their party: a takeover by radical left-wing extremists determined to pursue harmful policies far out of touch with most Americans.

Biden’s selection of the far-left freshman senator from California showed Americans once again that the left-wing mob controls his candidacy. Biden has now proven he is willing to bow down to the left-wing extremists at every turn if it helps him achieve his lifelong goal of becoming president.

Make no mistake — Kamala Harris is her party’s de-facto nominee for president, and this should scare all Americans. She and Biden are now running on the most extreme, far-left ticket in American history. Today’s Democratic Party bears little resemblance to the party of even just a few years ago, positioning itself on the radical fringe of American politics.

TRUMP ON HARRIS: 'NOBODY MORE INSULTING TO BIDEN THAN SHE WAS' DURING PRIMARY

For example, Harris is on board with democratic socialist Sen. Bernie Sanders’ “Medicare-for- all” plan to abolish private health insurance. If she were to get her way, nearly 200 million Americans would lose their private health plans, making them unable to continue seeing physicians their families have relied on for years.

She has sponsored the crazy $93 trillion Green New Deal and has said there’s “no question” she wants to ban fracking, which studies have shown would raise the price of household energy costs by 30 percent, reduce family incomes by an average of $8,000 every year, and make the U.S. dependent on costly and unreliable foreign energy.

The New York Times might consider this the position of a pragmatic moderate, but most Americans don’t.

Harris’ support for defunding the police would lead to Portland-type scenarios all across the country and cause more of our nation’s finest like Seattle’s Police Chief Carmen Best to resign out of concerns that elected officials are putting politics ahead of public safety.  School districts would no longer have police protection, putting our children in danger.

You have to look no further than New York City, our country’s largest police department, where retirements are up an astounding 411% and murders are up a frightening 50% to know this is already happening.

She plans to raise taxes through the roof, believes in taxpayer-funded abortion in the ninth month, and wants to rob Americans of their Second Amendment rights by seizing guns from millions of law-abiding citizens.

Harris’ support for these far-left policies might be popular among progressives in the San Francisco crowd she caters to, but they are deeply concerning to millions of people in my state of Michigan and all across Middle America who want a strong economy and safe communities, not socialism.

In addition to considering Harris’ bad policies, voters making up their minds about who to vote for in the November election will have to contend with her problematic past.

In California, Harris built a career out of over-prosecuting kids in minority neighborhoods and doing anything to appear “tough on crime,” including championing a law to put parents of truant kids in jail.

The contrast between the Biden-Harris and Trump-Pence tickets couldn’t be clearer.

Of course, any sort of law-and-order message is considered a third rail in today’s Democratic Party, so Harris no longer talks about her record — and the left-wing media know better than to ask.

However, voters deserve to know the truth about Harris’ record as well her radical policies, especially as questions are raised about the 77-year old Biden’s cognitive abilities.

The radical, far-left policies Harris and Biden have embraced stand in stark contrast to the record of results achieved under the leadership of President Trump and Vice President Mike Pence.

In particular, Harris will have a hard time holding her own on the debate stage with Vice President Pence, a man who has been indispensable in executing President Trump’s America First agenda.

From shepherding the creation of the Space Force, to standing up for our men and women in law enforcement, to helping lead the administration’s bold and aggressive response to the coronavirus, Mike Pence has proven to be the strong governing partner President Trump knew he picked four years ago.

Vice President Pence’s character speaks to someone who has a servant’s heart. Voters have come to count on him and President Trump to deliver for them and always look out for the interests of the American people.

On the other hand, just as was the case when her presidential campaign fell flat, the more that voters see of Harris, the less likely they are to trust that her policies will deliver for American families.

The contrast between the Biden-Harris and Trump-Pence tickets couldn’t be clearer.

The American people know President Trump and Vice President Pence will always defend —  not defund — the police, and have the courage to stand up to China.

Americans know the Trump-Pence team will continue to fight for fairer trade deals and pro-growth policies, and will return our economy to the historic levels of growth they achieved before the coronavirus traveled from China to nations around the world, harming the economies of every nation.

Americans also know this isn’t the time to experiment with dangerous socialist policies that have failed everywhere they have been tried.

That’s why when voters across America cast their ballots they are going to reject the radical policies of the Biden-Harris ticket by voting to reelect President Trump and Vice President Pence to a second term, and keep our great American comeback going.