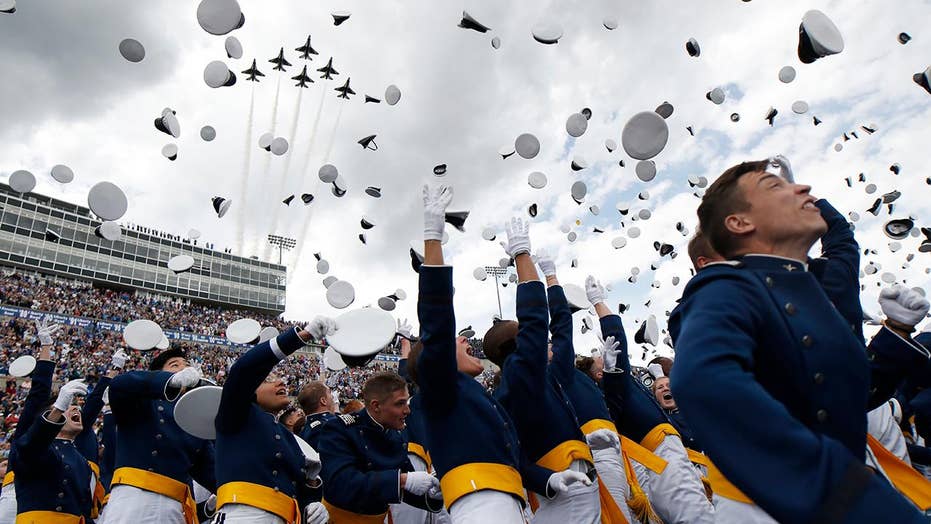 With diplomas in hand and a handshake from President Trump, Air Force graduates are ready to begin their careers.

Universities always try to score a big “get” to keynote their graduation exercises, and they don’t get any bigger than a head of state.

This week, a prestigious American university proudly turned its graduation podium over to the leader of — Germany. Harvard’s preference for the Teutonic tones of Chancellor Angela Merkel over the New York English of President Trump reflects the sad state of how our nation converses — and how we represent ourselves to the world.

The annual ritual of graduation speeches is part of our national conversation. Covered by the media and widely shared among “regular people,” these addresses present thoughts on values, wisdom, hope, challenge, change, compassion, and aspirations.

Increasingly, elite liberal colleges look more like a sinkhole of student debt, and ground zero for the greedy and intolerant face of education corporatism.

Harvard gave Merkel its coveted platform to share her musings with the world. But neither that hallowed institution — nor, so far as I can tell, any other university aside from military academies — appears to have invtied the U.S. president to speak.

The American academy, it seems, would prefer that Trump stay off their campuses and keep his thoughts to himself.

One the same day Merkel spoke at Harvard, Trump spoke to the graduating class of the Air Force Academy (a great institution, though it pains me, a West Point grad, to admit it). It was a big day for the cadets — not just because they received their commissions, but because the commander in chief stayed on stage after his speech to shake the hands with every newly commissioned officer. That’s about 1,000 hands.

But presidents routinely appear as graduation speakers at the military academies. The absence this year of a presidential voice at a non-military university is disconcerting.

Clearly, institutional academia is no fan of President Trump. But its disdain extends far beyond the president, encompassing virtually all things — and speakers — smacking of conservatism. That’s not new this year. I’ve been unable to identify a single Ivy League school that featured a conservative commencement speaker in the last three years.

Conservative addresses at major universities are about as prominent as kale in Hannibal Lecter’s fridge. For every Arthur Brooks invited on campus there is an army of Madeleine Albrights and Michael Bloombergs. Even the long list of actors, writers, scholars and corporate bigwigs tends to lean left.

This holds true for more than just cap-and-gown ceremonies. Shutting down conservative voices is starting to look like a required course. Williams College recently drew national attention over the issue. Such stories seem more and more common.

And, it’s not just home-grown liberal activists trying to squelch “unacceptable” voices. There is an alarming trend of foreign Chinese students on American campuses organizing campaigns to silence speech unfavorable to their country

Conservatives and others who value free speech and open inquiry find these developments concerning. The president is so concerned, he has issued an executive order to protect free speech on campuses. It’s a sensible move, but one unlikely to make him many more friends in the faculty meetings.

The academy complains that Trump poorly represents America to the world. But increasingly, American universities are the national embarrassment. They are more concerned about Trump’s tweets than serving as a national beacon of free, inclusive and diverse speech.

The real tragedy here is that the great universities are in danger of drifting away from the center of America’s public square. They are losing their relevance to the rest of us. Increasingly, elite liberal colleges look more like a sinkhole of student debt, and ground zero for the greedy and intolerant face of education corporatism.