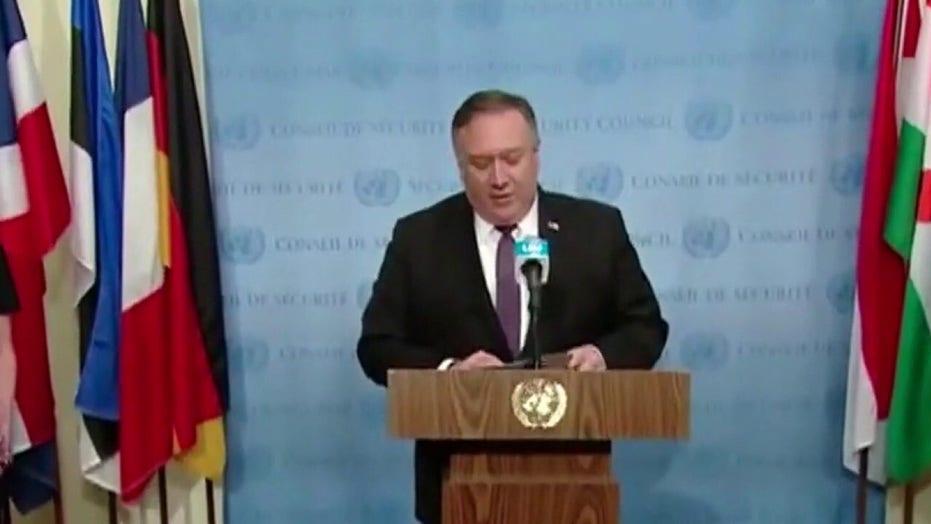 Iranians are carefully watching the U.S. presidential election campaign because they know their own future is on the line. But while two factions of the Islamist regime are campaigning against each other in advance of their own nation’s June 2021 presidential election, they clearly agree on one thing: both hope former Vice President Joe Biden is elected president of the United States in November.

The Trump administration’s sanctions have severely battered the Iranian economy. The Iranian recession is entering its third year, while the value of the nation’s currency has depreciated a stunning 84 percent from its high point.

Biden and his foreign policy advisers have pledged to reenter the 2015 Iran nuclear deal that President Trump has withdrawn from. If Biden is elected and does that, the most crippling economic sanctions on Iran would be suspended.

The lifting of sanctions would be great news for Iran — but bad news for every nation concerned about Iran’s support of terrorist groups, threats to Israel and other Middle East nations, and potential for developing nuclear weapons that could pose a threat to our allies and the U.S. itself.

The Iranian economy boomed in the wake of the 2015 nuclear deal. Biden’s advisers have implied they are planning to make concessions, unilaterally if necessary, during President Hassan Rouhani’s final months in office that can help one of his protégés in the upcoming Iranian election running to succeed him.

America’s allies in the region — including Israel, Saudi Arabia, and the United Arab Emirates — were opposed to the 2015 nuclear deal agreed to by President Barack Obama’s administration.

Our allies perceived the nuclear deal as a major threat and a change in the balance of power in the Middle East in favor of the virulently anti-American regime in Tehran, which has stated its goals include wiping Israel off the map and overthrowing of the Saudi royal family.

The nuclear deal put Iran on a patient pathway to a nuclear bomb and provided Tehran the financial resources it needed to dominate the region.

Over the last two years, the Iranian regime’s terrorist proxies in Lebanon and Iraq have been under pressure because Tehran lacked the necessary resources to support them. A revival of the nuclear deal under a Biden administration would offer Tehran what it lost after the Trump administration left the nuclear deal in May 2018. So naturally, Tehran prefers Biden.

If Trump is reelected the prospect of a new nuclear deal probably is remote, despite Trump’s prediction that he could sign a deal in less than a month in his second term.

Iranian Supreme Leader Ayatollah Ali Khamenei would find it difficult to forgive Trump for ordering the killing of terrorist Qassem Soleimani, the iconic commander of the Iranian Revolutionary Guards Corps   Quds Force. This will be true regardless of who succeeds Rouhani.

That said, tensions are likely to worsen under an Iranian principlist president, since he won’t share the talent of Rouhani and Foreign Minister Javad Zarif for cultivating Westerners who fear escalation.

The lifting of sanctions would be great news for Iran — but bad news for every nation concerned about Iran’s support of terrorist groups, threats to Israel and other Middle East nations, and potential for developing nuclear weapons.

Whether Americans elect Trump or Biden as president can have a major impact on who prevails in the Islamic Republic. Elections in Iran are neither free nor fair, but they are not predictable either.

Supreme Leader Khamenei holds the reins of power. The president is his subordinate. The regime disqualifies candidates who are not loyal or useful to the theocracy. The voters decide among those who Khamenei has approved.

Of course, the outcome of the U.S. presidential election is not the only factor that will affect the Iranian election outcome.

There are two main factions contending for control of Iran. One is the principlists, named for their determination to uphold the principles of the Islamic revolution. The other is the pragmatists, including incumbent President Rouhani.

Foreign observers often mistake the pragmatists for moderates or reformers, in contrast to the principlists, whom they label hardliners. Pragmatists recognize the need for tactical compromises to defend the Islamic revolution, but its inaccurate to describe them as moderates.

This past February, only 42 percent of Iranians bothered to vote in the lowest turnout in a parliamentary election since the 1979 revolution. They delivered a crushing defeat to those aligned with President Rouhani.

The outcome was a repudiation of Rouhani. As head of the Supreme National Security Council, he oversaw how the Islamic Revolutionary Guard Corps crushed two waves of protests since his reelection in 2017. His popular support dropped as a result.

In November 2019, under Rouhani’s watch, security forces killed 1,500 Iranians in less than a week. It is true that Rouhani has no real control over the IRGC and Law Enforcement Force, but he didn’t show any objection to the bloodshed in the streets.

Rouhani’s government has also failed to blunt U.S. sanctions. On top of this, its malpractice has accelerated the COVID-19 pandemic, which has taken more than 21,000 lives in Iran.

The pragmatists also lack a strong candidate for presidential elections next year. But they are hoping that a Biden victory will rescue them from the grave.

Yet Iranian voters may not go along. Rouhani — a cleric who helped to build the Islamic Republic’s police state — likely no longer has the public support that enabled him to win the last presidential election.

Iranians may abstain from voting in the 2021 election in large numbers. If Khamenei prefers a principlist triumph, he may not even have to condone ballot rigging, as he has done in the past.

The pragmatists’ weakness is not necessarily the principlists’ strength. The principlist rage against sanctions, but have no plausible means of blunting their impact. They are promising to wage an anti-corruption campaign, which could appeal to voters outraged by pervasive graft. However, the principlists are corrupt to the core.

The regime in Tehran is in a challenging position. It faces a massive budget deficit and currency depreciation, soaring inflation, long-term recession, and falling currency reserves. And Tehran’s regional empire is on a shaky ground amid the protests in Iraq and Lebanon against the Iranian-backed status quo.

The Iranian regime has survived two waves of protests by murdering hundreds of protesters and adding to the enmity that millions of Iranians have toward the clerical regime. While the regime has so far been adept at squelching unrest, the violence required to do so keeps increasing.

The preeminent question for either Biden or Trump, or for the Europeans who always want to increase trade with the Islamic Republic, is whether it’s ever strategically astute to enrich and quite possibly prolong the life of such a dangerous theocracy.

A Biden victory in November would prop up the Iranian regime. A Trump victory would weaken it further.

Saeed Ghasseminejad is a senior Iran and financial economics adviser at the Foundation for Defense of Democracies (FDD).