Hillary Clinton, what are you thinking? We don't need another education subsidy 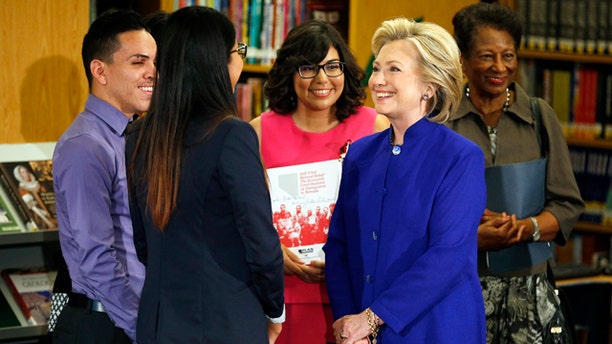 May 5, 2015: Hillary Rodham Clinton, a 2016 Democratic presidential contender, second from right, speaks with a group about immigration at an event at Rancho High School in Las Vegas. (AP Photo/John Locher)

If elected president, Hillary Clinton has promised to spend $350 billion to make college "more affordable." The U.S. already has an $18 trillion debt (and growing by the day), but Clinton wants to add to it. That's not affordable.

Too many young people are graduating from universities unable to find jobs, or are underemployed. Slate.com references a 2014 study of youth joblessness by the Economic Policy Institute. It found "...roughly 8.5 percent of college graduates between the ages of 21 and 24 were unemployed. That figure is based on a 12-month average between April 2013 and March 2014, so it's not a perfect snapshot of the here and now. Still, it tells us that the post-collegiate job market, just like the rest of the labor market, certainly isn't nearly back to normal. (For comparison, the unemployment rate for all college grads over the age of 25 is 3.3 percent, which is also still higher than normal.) More worrisomely, the EPI finds that a total of 16.8 percent of new grads are 'underemployed,' meaning they're either jobless and hunting for work; working part time because they can't find a full-time job; or want a job, have looked within the past year, but have now given up on searching."

The problem isn't just at the university level; it's at the jobs level where Obamacare, higher taxes and overregulation have reduced incentives to hire people, or forced many to accept part-time work.

When I entered American University as a freshman in 1960, tuition was $450 a semester. Today you probably can't get out of the bookstore for that amount. I received no federal subsidies. My father paid for the first year and I paid for the rest by working and getting a small student loan from the bank, which I quickly repaid.

While federal help for education has been around since the mid-19th century, most notably with the GI Bill after World War II, direct grants and other federal help to universities began to increase in the late '60s, leading to a rise in the cost of tuition. As University of Colorado law professor Paul F. Campos noted recently in The New York Times, "...over the past 35 years, college tuition at public universities has nearly quadrupled..."

Campos rejects the view promoted by some that federal subsidies are necessary because of cuts at the state level: "...far from being caused by funding cuts, the astonishing rise in college tuition correlates closely with a huge increase in public subsidies for higher education. If over the past three decades car prices had gone up as fast as tuition, the average new car would cost more than $80,000."

U.S. education in the 21st century is based on a 20th-century model. No one ought to be "entitled" to tax money to go to expensive schools like Harvard or Yale, or even public universities. Community colleges and the online universities that offer students flexibility to work and study cost less and provide necessary knowledge, or trade skills for the job market. Athletics and the rest of the university culture may be fine for those who can afford it, but for students and parents who can't there are many more options than when I attended college.

Hillary Clinton's proposal is a vote-buying effort that will add one more entitlement to an economy that can't afford it. Given the sharp decline of the Chinese yuan it looks like China, the main U.S. debt holder, may have reached its lending limit.

If American politicians can't be an example of what living within one's means looks like, how can we expect younger people to embrace a Puritan ethic that served us well before envy, greed and entitlement took over?