The first eight months of the Biden administration have been a disaster for America. President Biden is dangerously incompetent, and Democrats in Washington (who have full control of our national government) will never hold Joe Biden accountable or bring a stop to his destructive impulses.

Few times in American history have we so desperately needed a check against a president like we do now. Americans will have our first real chance to stop Joe Biden’s agenda in the 2022 midterms, in less than 14 months, but Republicans must start building for that moment now.

That’s why we have become co-chairmen of the National Republican Redistricting Trust (NRRT). Redistricting – the once-a-decade job of drawing districts for Congress and state legislatures – will set the political battleground for the next 10 years and give Republicans a clear shot at taking back the U.S. House.

But we must get it right.

Since the last redistricting in 2011, Democrats have waged a well-funded national effort to change redistricting processes in red states, gain control of state supreme courts, and bring lawsuits to undo Republican-drawn maps. Their strategy paid off.

Democrats’ lawsuits bought them 10 seats across North Carolina, Florida, Pennsylvania and Virginia. Those 10 seats are the difference between the current Democrat majority led by Speaker Nancy Pelosi, D-Calif., and a Republican majority able to block Joe Biden’s radical left-wing agenda.

Republicans last decade were disorganized and unprepared for Democrats’ sue-to-blue campaign. That’s why Republicans finally took action and in 2017 formed NRRT to be the GOP’s hub for coordinating a national redistricting strategy.

NRRT’s mission is to build a new, durable Republican majority, with districting maps that are legally constructed. We will do that by protecting vulnerable incumbents, expanding our offensive opportunities, and pursuing a two-pronged litigation strategy – to defend our redistricting successes and challenge illegal gerrymanders drawn by Democrats and redistricting commissions.

Democrats have already reopened their old playbook and gotten to work. Former Attorney General Eric Holder keeps saying he’s "fighting gerrymandering" and wants "fair maps," but his organization’s mission has nothing to do with either. His group’s own tax forms say they exist to "favorably position Democrats" for redistricting. His organization claims to want more competitive districts, but that must only apply to red states.

In Oregon, a blue state with an equal number of Republicans and Democrats on their redistricting committee, Republicans put forward a map with two districts that would elect a Democrat, one that would elect a Republican, and three that were competitive by any reasonable metric. Democrats’ map had five reliable blue seats (achieved by cutting metro Portland into four pieces) and one Republican district.

Their strategy has nothing to do with maximizing competitiveness or fighting gerrymandering.

Holder’s lead lawyer condemned the Republican map – the one that prioritized competitive districts the way the Democrats say they want – as a gerrymander. He said nothing about Democrats’ proposal. 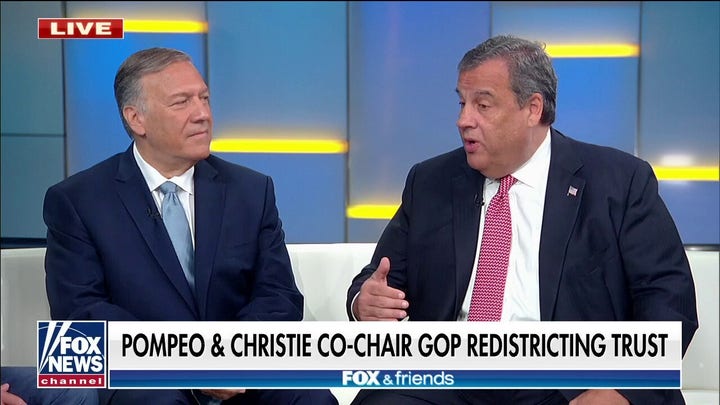 The most telling moments of their strategy have come in North Carolina – the state that saw the most litigation last decade. When Democrats successfully sued and forced Republicans to give Democrats two more seats in Congress, Holder said it wasn’t good enough and would sue again. Why? Because for Democrats a "fair map" is a map that elects as many Democrats as possible. Nothing more.

Their strategy has nothing to do with maximizing competitiveness or fighting gerrymandering. It is all about getting Democrats as many seats as possible.

Instead of worrying about what Democrats will do, you should take the lead. Draw maps that follow the law, that will stand for a decade, and that achieve your objectives. And when Democrats inevitably sue, you will have put yourself in the strongest possible starting position to defend your maps and we will have your back.

Chris Christie and Mike Pompeo are the co-chairs of the National Republican Redistricting Trust.