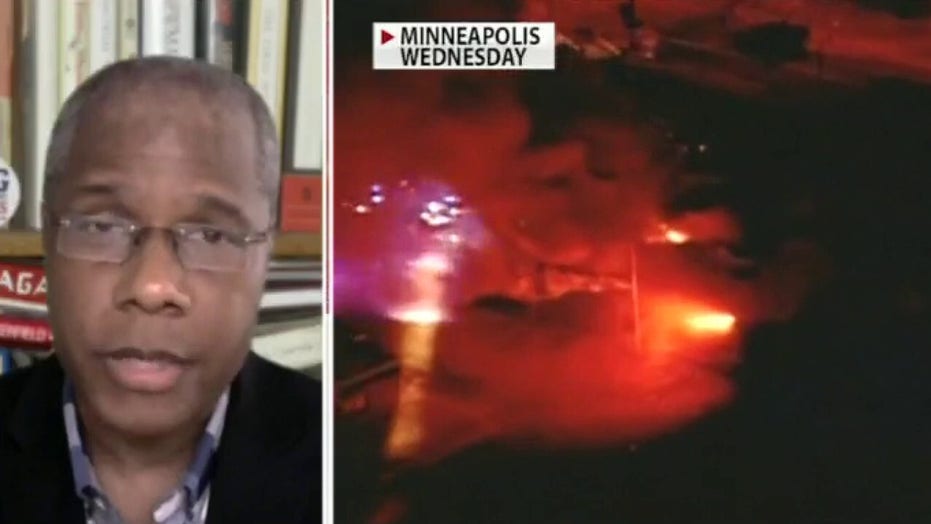 Deroy Murdock: Rioters do injustice to George Floyd, tortured and killed in a case of police brutality

George who? The unarmed Minneapolis man who was killed with a cop’s knee in his neck seemed light years away as my neighborhood, and then my intersection, and then my apartment filled with smoke Saturday night.

Around 6 p.m., hundreds of loud, but peaceful, protesters walked up Fourth Avenue toward Manhattan’s Union Square. ”No justice, no peace!” they chanted. “The people, united, will never be defeated,” they promised.

ANDREW McCARTHY: LAWS AGAINST RIOTING AND TERRORISM MUST BE ENFORCED AGAINST ANTIFA AND OTHER VIOLENT RADICALS

Throughout the late afternoon and early evening, demonstrators lamented Monday’s brutal, police-involved death of George Floyd. Their shouted slogans echoed off apartment buildings as they mustered in Union Square and walked in large numbers, intermittently north, south, east and west.

Just after dark, yet another crowd of demonstrators headed north on Fourth Avenue as another cadre walked south from 14th Street. The two groups met, mingled, and made noise as scores of NYPD officers stood ground.

Within minutes, someone lit a pile of garbage — not a rare find in this town. The flames were not huge, but they were pronounced and menacing, for all that they foreshadowed.

The crowd stepped lively west, across the street, as if in deference to the blaze. The police, some in riot helmets, took this as their cue to split the crowd into segments.

They formed two lines and stood, shoulder to shoulder, along East 13th and 14th streets. The masses seemed to retreat within a few minutes. Four firemen from FDNY’s Ladder Three Company, steps away on East 13th, walked over, flattened the burning trash with a shovel, and doused the flames with a fire extinguisher.

“That settles it,” I reckoned.

About 20 minutes later, I smelled something burning.

I opened my balcony door and saw huge billows of thick, black smoke on 13th Street, between Fourth Avenue and Broadway.

What do smoke, scorched aluminum and shards of glass have to do with George Floyd’s needless, wasteful and hideous killing? Nothing.

I could not see what was alight. But within seconds, flames reflected off the windows of the Regal Union Square, a top-notch tetradecaplex where I savor motion pictures — when America is not menaced by arson within race riots inside an economic implosion tucked into a global pandemic.

“My God,” I thought. “The Hyatt Regency Union Square is on fire!” I feared that the hotel’s entire north side would be incinerated.

As rioters looted George Floyd's spotlight, I stepped inside and watched Fox News Channel’s live coverage, ironically expecting to find a better angle on this mayhem on TV than from the actual bedlam unfolding half a block from my home

Fox News soon revealed the source of this dense, irritating, eye-burning smoke: an NYPD van. It was fully engulfed. Fire raced from its windows. More of New Yorkers’ tax dollars up in flames — this time literally.

At least five such NYPD vehicles were badly damaged or destroyed. They now line nearby University Place, where they sit as further victims of Saturday night's anarchy. These far-Left agitators did not spare even a van from the NYPD's Homeless Outreach Unit. Its windshield is bashed in, and its side windows are smashed or busted out completely. So much for the Left's "compassion" for the downtrodden.

As the rape of my neighborhood ground on, Fox’s intrepid camera crew at Broadway and East 13th Street captured an, in some way, even more enraging scene:

Some young thug took his skateboard in his hands, tipped it sideways into a window at Santander Bank, and walked on by as the pane of glass shattered into the Spanish lender’s branch lobby. He didn’t do this with any sense of purpose or apparent outrage. He did this more casually than if he swatted a fly. The banality of evil in the East Village.

Where was the memory of George Floyd in all of this?

What do smoke, scorched aluminum and shards of glass have to do with George Floyd’s needless, wasteful and hideous killing?

Will this destruction help unify Americans in pursuit of justice for George Floyd?