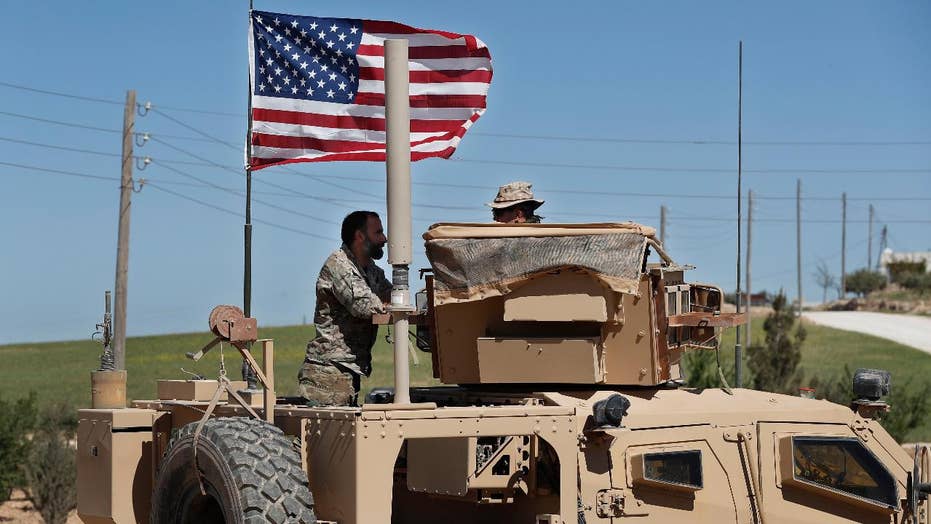 Turkish and Russian defense ministers meet to talk about involvement in Syria: Is the US among their concerns?

Heritage Foundation national security affairs senior fellow Peter Brookes breaks down the complexity of the U.S. troop withdrawal from Syria for other countries.

America’s allies and enemies alike will place their 2019 foreign policy bets on a hunch: whether or not President Trump will win a second term in 2020.

Despite the troublesome tweets and sometimes reprehensible rhetoric, in practice the Trump administration has largely stood by its friends and stiff-armed its enemies.

But the 2020 elections raise a big question: What if the “anti-Trump” candidate is elected? It could bring anything from “Trumpian policies by other names” to “whatever Trump did, just do the opposite.”

Around the world, some may just mark time and wait and see. Iran, for instance, might stand pat, waiting to see if former Secretary of State John Kerry’s prediction – that the next occupant of the Oval Office will meekly walk back Trump’s withdrawal from Obama’s nuclear deal with the mullahs – comes true.

Similarly, Russian President Vladimir Putin might be hoping the next American president will extend arms control agreements like the New START treaty.

And will North Korea’s leader Kim Jong Un keep his nuclear weapons for now? No telling.

There are, however, big foreign policy issues that are bound to see major decisions and actions in 2019. Here are five headlines I think you’ll see next year.

#5. Israel and Hezbollah clash. Brace for it. This not just about the U.S. pulling up stakes in Syria. One could interpret the readjustment of U.S. and Turkish positions in Syria as clearing the way for Israeli action against the Hezbollah terrorist group.

The Israelis have long signaled zero tolerance for Iran adding long-range precision missiles to Hezbollah’s arsenal, or allowing the Lebanon-based terrorists to establish a long-term presence in Syria. The U.S. role will be to prevent the messy conflict from escalating into a wider war.

Israeli Prime Minister Benjamin Netanyahu recently called snap elections for April 9. His coalition will win, giving Netanyahu a mandate for action. If all goes well, Hezbollah will be dealt a serious blow that leaves its already overstretched sponsors in Tehran in an even more difficult spot.

#4. America stays in Afghanistan. Administration sources insist that President Trump still has not made a decision on future force levels in Afghanistan. There is a strong argument not to back off the American commitment now.

Don’t expect President Trump to repeat the mistake President Obama made in withdrawing from Iraq. Trump and our allies are unlikely to pull the rug out from under Kabul in 2019. A complete walk-away would seriously destabilize the region. The Taliban who cheered reports of a U.S. withdrawal will be disappointed – and most likely targeted by a drone.

#3. The Dragon Sleeps. China has as much, if not more, to lose from a trade war than the U.S. China’s expansive Belt and Road has met with as many jeers as cheers, with many European ambassadors criticizing the initiative.

Moreover, Beijing has suffered setbacks in the Maldives, Sri Lanka, and Ethiopia – countries where, just a year ago, China seemed to be on a diplomatic roll.

Best guess is that China takes a timeout to rethink how to deal with a recalcitrant U.S. and rising friction caused by its aggressive foreign policy. Look for Chinese President Xi Jinping to hit the pause button in the trade war.

#2. Viva Latin America. The best news President Trump will get in regaining control of our southern border is better, albeit quiet, cooperation from Mexico and Brazil – the two powerhouses of Latin America.

While well short of an overt partnership, quiet cooperation on issues of mutual concern will help mitigate thorny problems like the Venezuelan meltdown and caravans headed toward the U.S. border.

#1. Goodbye INF. The U.S. will pull out of the Intermediate Range Nuclear Forces Treaty, an arms control treaty reached between the U.S. and the Soviet Union (succeeded by Russia) in 1987. That decision will trigger a six-month withdrawal process.

But don’t expect a post-withdrawal rush to build new U.S. nuclear weapons. And don’t expect Moscow and Beijing to jump on the chance to negotiate a replacement treaty.

In the short-term, the U.S. will start looking to field more conventional precision-strike weapons to help offset the threat Russia’s “tactical” nukes present to Europe. Meanwhile, it is even odds whether the U.S. agrees to a short-term extension of the New START or lets it expire outright.